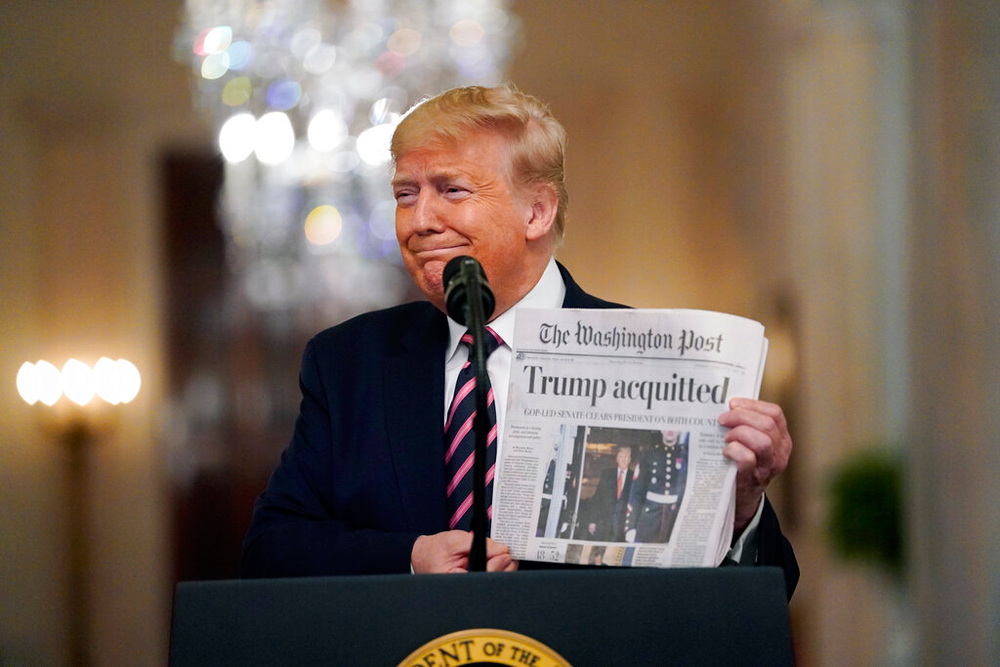 President Donald Trump was acquitted on Wednesday in his US Senate impeachment trial, saved by fellow Republicans who rallied to protect him nine months before he asks voters in a deeply divided America to give him a second White House term.

The businessman-turned-politician, 73, survived only the third presidential impeachment trial in US history — just like the two other impeached presidents — in his turbulent presidency’s darkest chapter. Trump now plunges into an election season that promises to further polarise the country.

Trump was acquitted largely along party lines on two articles of impeachment approved by the Democratic-led House of Representatives on December 18. The votes to convict Trump fell far short of the two-thirds majority required in the 100-seat Senate to remove him from office under the US Constitution.

The Senate voted 52-48 to acquit Trump of abuse of power stemming from his request that Ukraine investigate political rival Joe Biden, a contender for the Democratic nomination to face him in the November 3 election. Republican Senator Mitt Romney joined the Democrats in voting to convict. No Democrat voted to acquit.

The Senate then voted 53-47 to acquit him of obstruction of Congress by blocking witnesses and documents sought by the House. Romney joined the rest of the Republican senators in voting to acquit on the obstruction charge. No Democrat voted to acquit.

On each of the two charges, the senators stood at their desks on the Senate floor to vote one by one, with US chief justice John Roberts presiding.

Trump watched the Senate vote with top aides in a White House dining room that he uses as a private study, a senior administration official said. Trump said he would deliver a public statement “to discuss our Country’s VICTORY on the Impeachment Hoax!”

On Twitter, the President posted a video showing Trump campaign signs for future elections from 2024 onward ending with “Trump 4EVA”. The US Constitution limits a President to two elected four-year terms in office.

“President Trump has been totally vindicated and it’s now time to get back to the business of the American people,” Trump’s campaign manager, Brad Parscale, said in a statement.

Senate Majority Leader Mitch McConnell and other Republicans engineered a stripped-down trial with no witnesses or new evidence. Democrats called it a sham and a cover-up. Trump called the impeachment an attempted coup and a Democratic attempt to annul his 2016 election win.