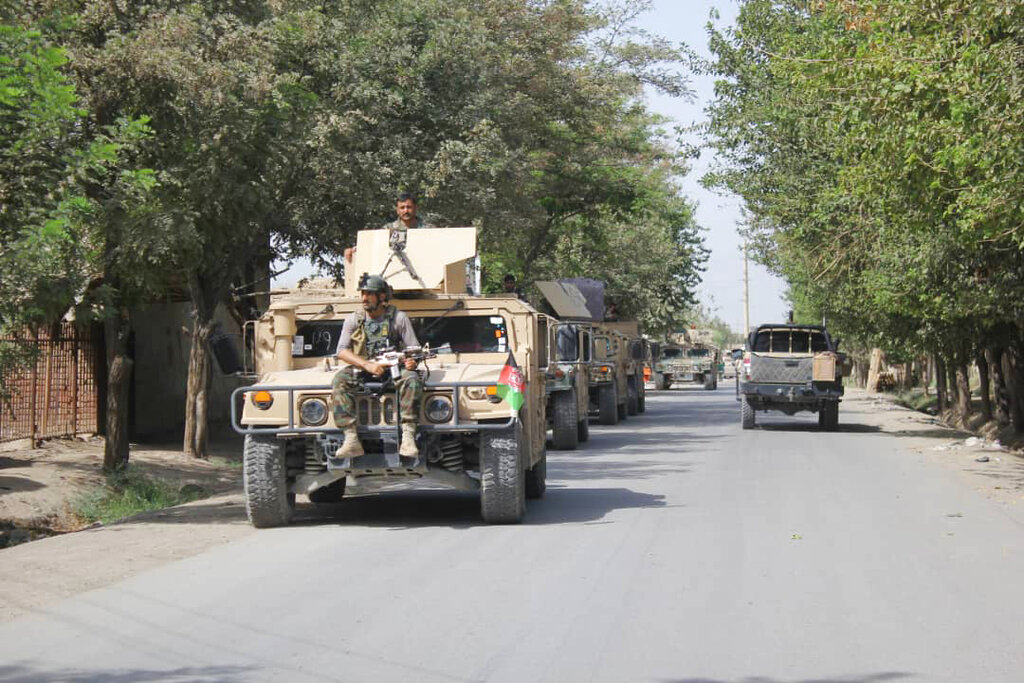 The Taliban attacked a second Afghan city in as many days on Sunday, an official said, even as Washington's peace envoy said the U.S. and the militant group are 'at the threshold of an agreement' to end America's longest war.

The attack on the capital of Baghlan province came hours after U.S. envoy Zalmay Khalilzad said he warned the Taliban during talks in Qatar that 'violence like this must stop.' But he appeared determined to move forward on a deal that plans the withdrawal of some 14,000 remaining U.S. troops in exchange for Taliban guarantees that Afghanistan will not be used as a launch pad for global attacks.

Khalilzad was visiting Kabul on Sunday to brief the Afghan government on a deal that is not yet final. Both he and the Taliban confirmed the latest round of talks had ended.

The attacks are seen as strengthening the negotiating position of the Taliban, who control or hold sway over roughly half of Afghanistan and are at their strongest since their 2001 defeat by a U.S.-led invasion. Some critics have warned that the Taliban are merely waiting out the U.S. and that another U.S. goal in the talks, a cease-fire, likely will not happen as foreign troops leave.

In Baghlan the spokesman for the provincial police chief, Jawed Basharat, said gunbattles continued on the outskirts of its capital, Puli Khumri. There was no immediate word on any casualties.

'We hear the sound of blasts. The people are so worried,' Safdar Mohsini, chief of the Baghlan provincial council, told The Associated Press. 'The Taliban are in residential areas fighting with Afghan security forces. We need reinforcements to arrive as soon as possible, otherwise the situation will go from bad to worse.'

If the Taliban enter the city, they will be very difficult to repel, Mohsini added, saying security forces at some checkpoints had run away without resistance. The city is 140 miles (230 kilometers) north of Kabul.

Taliban spokesman Zabihullah Mujahid in a Twitter post asserted that fighters were inside Puli Khumri and that the governor's house was under siege.

The assault came a day after the Taliban attacked Kunduz, one of Afghanistan's largest cities, in the province to the north and killed at least 16 people and wounded nearly 100. The interior ministry on Sunday said the Taliban had been cleared from that city but some fighters had fled to Baghlan.

Few details have emerged from this latest round of peace talks. The Taliban spokesman in Qatar, Suhail Shaheen, said technical issues would be discussed on Sunday.

The approaching agreement with the Taliban 'will reduce violence and open the door for Afghans to sit together to negotiate an honorable & sustainable peace and a unified, sovereign Afghanistan that does not threaten the United States, its allies, or any other country,' the Afghan-born Khalilzad said on Twitter.

A U.S. official with the negotiation team said Khalilzad would meet with a wide range of Afghans in Kabul, including the government leadership.

'We can tell you that any potential peace deal will not be based on blind trust, but will instead contain clear commitments that are subject to our monitoring and verification,' the official said. 'Any potential deal would bring together all sides for negotiation, enable the withdrawal of American forces and ensure the security of the American homeland.'

The official spoke on condition of anonymity because the official wasn't authorized to discuss the matter with the media.

The official said that 'if and when we are able to announce an agreement, the process will pivot to intra-Afghan negotiations where the Taliban will sit with other Afghans and together they will commit to a permanent and comprehensive cease-fire.'

That reference to 'other Afghans' instead of the Afghan government is another reminder of the challenges in any intra-Afghan talks ahead. The Taliban have refused to negotiate with the government of Afghan President Ashraf Ghani, calling it a puppet of the United States.

The remaining U.S. troops train and support Afghan forces but also come to their aid with airstrikes and counterterror operations. About 20,000 U.S. and NATO troops are still in the country.

The strategic consequences of the Kashmir decision are significant

Afghanistan troop levels to be cut to 8600: Trump