The US, Japan, New Zealand and Australia shared concerns a security pact signed by China and the Solomon Islands 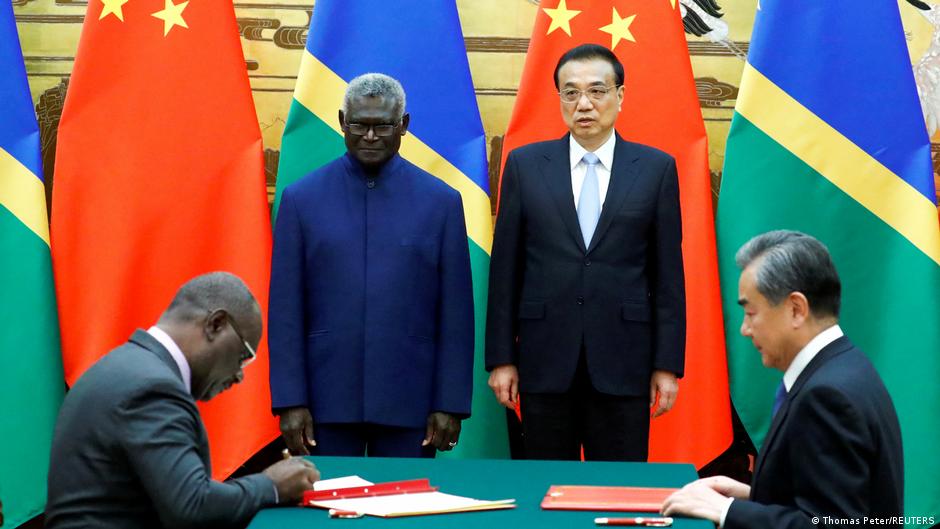 The US, Japan, New Zealand and Australia shared concerns a security pact signed by China and the Solomon Islands, which could increase China's influence on one of the Pacific Islands closest to Australia.

The United States, Japan, New Zealand and Australia have expressed concerns over a security pact signed between China and the Solomon Islands, the White House said in a statement.

"Officials from the four countries represented also shared concerns about a proposed security framework between the Solomon Islands and the People's Republic of China (PRC) and its serious risks to a free and open Indo-Pacific," National Security Council Spokesperson Adrienne Watson said.

China on Tuesday said it had signed a pact with the Solomon Islands but officials from the south Pacific islands initially appeared to suggest that the signature was still pending. The chairman of Parliament's public accounts committee, Douglas Ete, said Chinese officials would arrive next month to sign cooperation pacts.

At the same time, Prime Minister Manasseh Sogavare said a security agreement with China would not include a military base. Instead, Ete said the agreements would be centered on cooperation on trade, education and fisheries.

In light of the developing situation, the United States is sending a high-level delegation, led by Kurt Campbell, the National Security Council Indo-Pacific coordinator, and Daniel Kritenbrink, the assistant secretary of state for East Asian and Pacific affairs, to Solomons' capital Honiara this week.

The White House said it was concerned about "the lack of transparency and unspecified nature" of the pact.

A spokesperson for the NSC said the signing "follows a pattern of China offering shadowy, vague deals with little regional consultation in fishing, resource management, development assistance and now security practices." The NSC later said the United States would "intensify its engagement in the region to meet 21st-century challenges, from maritime security and economic development to the climate crisis and Covid -19."

Australian officials have expressed concerns over a potential Chinese military presence less than 2,000 km (1,200 miles) from Australia's shores in light of the new security pact. Foreign Minister Marise Payne said Australia was "deeply disappointed" and was seeking details of the terms of the agreement after China announced the signing. The Opposition Labor Party, meanwhile, called the announcement the "worst failure of Australian foreign policy in the Pacific" in almost 80 years, hoping to pin the failure on Prime Minister Scott Morrison with almost exactly a month to go until federal elections.

Last week, Zed Seselja, Australia's minister for international development and the Pacific, had visited Honiara and asked Prime Minister Manasseh Sogavare not to sign the pact.

Australia and New Zealand have long seen the Pacific as their "backyard" and see the security pact as a threat to their interests in the region. The Solomon Islands signed a security arrangement with Australia in 2017, which Honiara says will be unaffected by the security pact with Beijing.