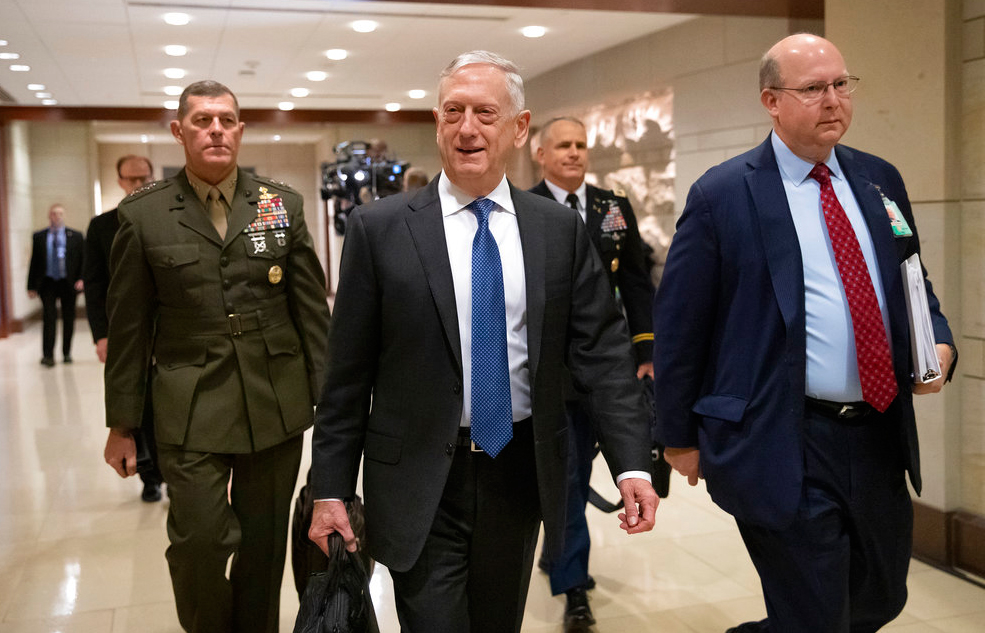 Secretary of defence Jim Mattis (centre) arrives to give House members a classified security briefing on the murder of Jamal Khashoggi and Saudi Arabia's war in Yemen, on Capitol Hill in Washington on Thursday.
AP
The Telegraph   |   Washington   |   Published 14.12.18, 06:58 PM

In back-to-back votes against Saudi Arabia, the Senate delivered an unusual rebuke of President Donald Trump's response to the death of journalist Jamal Khashoggi and signalled new scepticism from Capitol Hill toward the longtime Middle East ally.

Although the resolutions are largely symbolic — because it's unclear if they will be considered by the House — passage Thursday showed senators seeking to assert oversight of Trump administration foreign policy and the relationship with Saudi Arabia.

It also marked the collapse of the Trump administration's effort in the Senate to contain fallout from the gruesome killing.

One measure recommended that the US end its assistance to Saudi Arabia for the war in Yemen. The other put the blame for the death of Khashoggi squarely on Saudi Crown Prince Mohammed bin Salman. Both had been vigorously opposed by the Trump administration and threatened with a presidential veto. Top brass was on Capitol Hill ahead of voting to prevent further action in the House.

'The current relationship with Saudi Arabia is not working,' said Sen. Lindsey Graham, R-S.C., who opposed the Yemen resolution but called the crown prince 'so toxic, so tainted, so flawed' after the Khashoggi's killing that 'you're never going to have a relationship with the United States Senate unless things change.'

The bipartisan votes came two months after the Saudi journalist's slaying at the Saudi consulate in Istanbul and after Trump persistently equivocated over who was responsible. U.S. intelligence officials concluded that bin Salman must have at least known of the plot, but Trump has repeatedly praised the kingdom.

Senators made clear where they put the blame. The resolution, passed by unanimous agreement, says the Senate believes the crown prince is 'responsible for the murder' and calls for the Saudi Arabian government to 'ensure appropriate accountability.'

Senators voted 56-41 to recommend that the US stop supporting the war in Yemen, a direct affront to the administration's war powers abilities.

Lee said Khashoggi's death focused attention 'on the fact that we have been led into this civil war in Yemen half a world away' and 'we've done so following the lead' of Saudi Arabia.

'What the Khashoggi event did was to demonstrate, hey, maybe this isn't a regime that we should just be following that eagerly into battle,' Lee said.

As Senate approval loomed, the administration dispatched Secretary of State Mike Pompeo and Defence Secretary Jim Mattis to the House to make the case against the resolutions and warn of damage they could do to the US-Saudi relationship. A congressional aide and an administration official said their appearance was aimed at stopping any House action on the resolutions.

Pompeo and Mattis had made a similar entreaty to the Senate late last month. But it was roundly panned by senators angered by the secretaries' refusal to accept a CIA determination that assessed the crown prince had ordered Khashoggi's murder.

The journalist, who had lived in the US and wrote for The Washington Post, had been critical of the Saudi regime. He was killed in what US officials have described as an elaborate plot as he visited the consulate for marriage paperwork.

Saudi prosecutors have said a 15-man team sent to Istanbul killed Khashoggi and then dismembered his body, which has not been found. Those findings came after Saudi authorities spent weeks denying Khashoggi had been killed in the consulate.

Trump has been reluctant to condemn the crown prince. He said the United States 'intends to remain a steadfast partner' of the country, touted Saudi arms deals worth billions of dollars to the U.S. and thanked the Saudis for plunging oil prices.

But Graham and Sen. Bob Menendez, the top Democrat on the Foreign Relations Committee, have rejected Trump's economic arguments. They are setting the stage for legislation next year that goes further in halting arms sales and taking other measures.

Menendez says economic concerns do not overpower human rights and the US must send a 'global message that killing with impunity' will not be tolerated.

Frustration with the crown prince and the White House prompted several Republicans to support the Yemen resolution. Seven Republicans and all Democrats voted for it. Some already had concerns about the war, which human rights groups say is wreaking havoc on the country and subjecting civilians, many of them children, to a deadly disease and indiscriminate bombing.

The resolution condemning Saudi Arabia for Khashoggi's slaying was from Senate Foreign Relations Chairman Bob Corker and Senate Majority Leader Mitch McConnell. Both Republicans opposed the Yemen resolution and voted against it.

McConnell said senators have grave concerns about Khashoggi's killing, but 'we also want to preserve a 70-year partnership between the United States and Saudi Arabia, and we want to ensure it continues to serve American interests and stabilizes a dangerous and critical region.'

But McConnell encouraged passage of the Khashoggi resolution and said it provided 'a clear and unambiguous message about how we feel about what happened to this journalist.'

The Senate debate came as the United Nations secretary-general on Thursday announced that Yemen's warring sides have agreed to a province-wide cease-fire and withdrawal of troops in Hodeida, a contested Red Sea port city. The agreement came during peace talks in Sweden.

The brutal four-year-old civil war pits the internationally recognized Yemeni government, supported by a Saudi-led coalition, against the Iran-backed rebels known as Houthis.