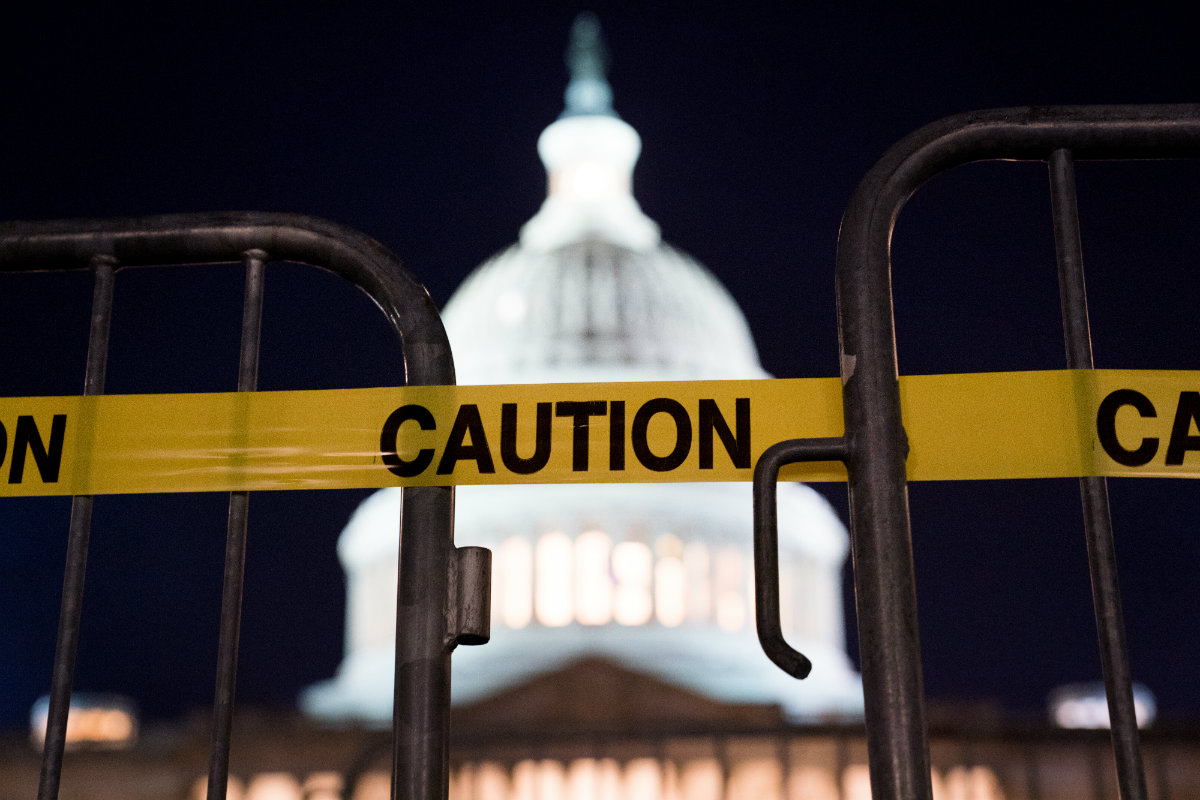 Caution tape in front of the US Capitol as negotiations for a stopgap spending bill were underway in the early evening in Washington on Wednesday.
The New York Times
Emily Cochrane/NYTNS   |   Washington   |   Published 20.12.18, 07:16 AM

Moving to head off a looming government shutdown, the Senate passed a stopgap spending bill on Wednesday night that would keep the government funded through February 8 — and would punt the impasse over a southern border wall to the new year and a divided Congress.

The bill, which quickly passed by voice vote after senators were corralled back to the chambers, was expected to pass the House on Thursday and be sent to President Donald Trump before the midnight Friday deadline, when funding would lapse for nine federal departments.

The measure poses an uncomfortable political problem for Trump among his far-right supporters, even though it remained unclear if the President, who has been a volatile factor throughout the spending debate, would sign such a measure without the $5 billion he has demanded for a border wall.

Trump appeared to back away from the demand in recent days, and conservatives were already condemning the President’s seeming capitulation on his signature campaign promise.

Political commentator Ann Coulter denounced a “gutless President”, Fox News host Laura Ingraham lamented that the “big beautiful wall” would now be “an open door with no frame”, and Rep. Jim Jordan, R-Ohio, warned that his party needed to keep its promise to build the wall.

Rep. Mark Meadows, R-N.C., the chairman of the House Freedom Caucus, said Trump was doing himself “major” political damage by relenting in the wall fight.

“They’re very concerned that he’s not fulfilling his campaign promise,” Meadows said of voters, describing the hundreds of phone calls his office received on Wednesday, protesting the President’s apparent retreat. “They believe it’s a promise that the President said he would keep.”

Other Republican lawmakers acknowledged that without wall funding included in the stopgap spending bill, they had lost their last foreseeable vehicle to secure funding for the wall, and that they would hand Rep. Nancy Pelosi, D-Calif., a triumph before the speaker’s election in January.

“I never believed we had a chance to go forward,” said Sen. John Kennedy, R-La. “I was never as sanguine as some about the possibility that Mrs. Pelosi would risk her speakership to fund President Trump’s wall.”

“It’s been clear to me,” he added, “that at least on this issue, Mrs Pelosi has been running the show.”

Republican lawmakers have struggled to find a compromise between Trump’s demands and Democratic opposition to spending money on a concrete wall at the border, a final dose of dysfunction in the waning moments of a Republican majority in Washington.

“I’m sorry that my Democratic colleagues couldn’t put the partisanship aside and show the same good-faith flexibility that the president has shown in order to provide the resources our nation needs to secure the integrity of our borders as well as the safety of American families,” Sen. Mitch McConnell of Kentucky, the majority leader, said on Wednesday morning on the Senate floor.

Democrats, two weeks away from taking the House majority, have refused to budge from the offers they had laid out for the president, which included up to $1.6 billion for border security but nothing for the border wall.

“The American people know the President’s wall is ineffective, expensive and only serves as a political bone to his most conservative supporters — certainly not worth a government shutdown,” Sen. Chuck Schumer of New York, the Democratic leader, said in a statement after the floor vote.

By declaring he would “own a shutdown” in a contentious televised Oval Office meeting last week, Trump had deprived Republican lawmakers of their ability to pin responsibility for a shutdown on the Democrats. But in the past two days, White House officials have signaled a softening of that position, and Trump appeared to hedge his position in a series of tweets on Tuesday and Wednesday.

“I don’t believe the leader would bring it up if he hadn’t had some assurance that the president would sign,” said Sen. Richard C. Shelby, R-Ala., the chairman of the Appropriations Committee, said of McConnell. “But you never know.”

The bill would not only maintain funding for the departments and agencies covered by seven spending bills that have not passed, but it would also extend a number of programmes set to expire, including the Violence Against Women Act, the National Flood Insurance Program and critical Medicaid provisions.

Avoiding a partial government shutdown was a welcome prospect for lawmakers, particularly given the holiday timing and the number of lawmakers who await retirement at the end of the session or have quietly left after their November defeats. More than 70 members from both parties were missing from votes in the House on Wednesday night.

Some lawmakers, anticipating quick consideration of the measure amid a year-end rush to get out of Washington before Christmas, feverishly tried to use the measure’s momentum to push through long-held goals, including disaster relief for farmers in the Southeast after a series of storms this year.

A bipartisan group of Western senators were further aggrieved when, after a delay, a vote on a lands package was blocked, prompting a fiery round of speeches on the floor. The package carried a handful of bills that include the permanent reauthorisation of the Land and Water Conservation Fund and put in place protections for the gateway to Yellowstone National Park and the headwaters of the Yellowstone River.

“Time to get it done,” said Sen. Maria Cantwell, D-Wash., and a sponsor of a bill that would permanently reauthorize the conservation fund. “The West wants to be heard.”

Senate leadership later told the group — which includes Montana’s senators, Jon Tester and Steve Daines, a Democrat and a Republican — that a vote on the package would be one of the first on the floor in January, Schumer and Tester confirmed.

And even though a path to funding had been made clear for the first time in days and did not include billions of dollars in wall funding, Democrats were also dissatisfied with the likely outcome and the prospect of having to confront the funding issue again only two months into their majority.

In a statement, Rep. Nita M. Lowey of New York, the incoming chairwoman of the House Appropriations Committee, condemned the Republicans for having “chosen to kick the can down the road for a third time.” She vowed to pass spending legislation that does not fund the border wall.

And the lawmakers and aides who had feverishly negotiated the details of the remaining funding bills voiced disappointment that their work would be shelved for now.

But others seemed more optimistic that the foundation would remain.

'We ended up with the best of all worlds — a good compromise,” said Sen. Patrick J. Leahy, D-Vt., the ranking member of the Appropriations Committee.

One senator — Thom Tillis, R-N.C., a self-described silver-lining guy — said that delaying a resolution until February could pave the way for a more thorough approach to border security and an immigration overhaul.

“Why don’t we get to a rational discussion about border security, immigration reform, path to citizenship for the DACA population and solve that problem?” he said. “Actually, getting the $5 billion or the full funding maybe makes that discussion more likely to take place in the next Congress.”