Authorities were still looking into the 24-year-old man's nationality and his criminal records, if any 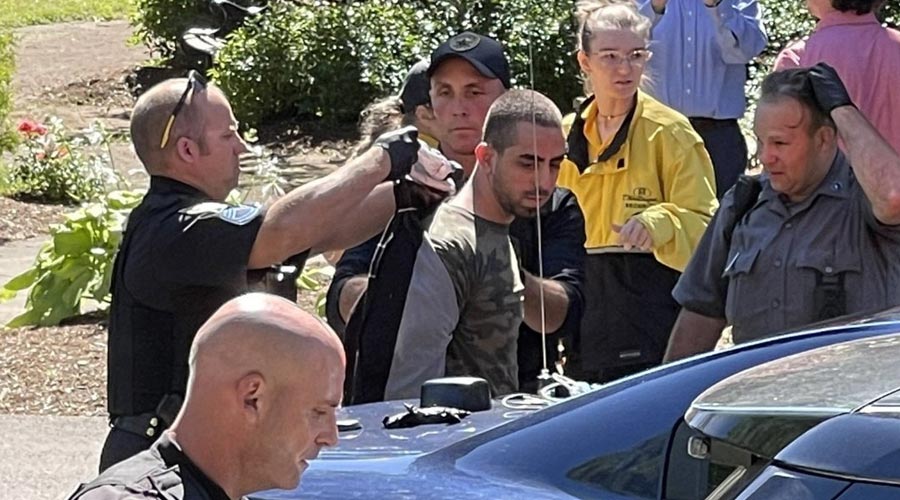 The New York State Police identified the suspect as Hadi Matar from Fairview, New Jersey while the motive behind the act is still unknown.
Twitter
PTI   |   New York   |   Published 13.08.22, 11:19 AM

The 24-year-old man detained in connection with the stabbing of Mumbai-born controversial author Salman Rushdie was sympathetic to "Shia extremism" and the causes of Iran's Islamic Revolutionary Guard Corps, according to a media report.

Rushdie, who faced Islamist death threats for years after writing "The Satanic Verses", was stabbed on stage on Friday while he was being introduced at the event of the Chautauqua Institution in Western New York.

The New York State Police identified the suspect as Hadi Matar from Fairview, New Jersey while the motive behind the act is still unknown.

The suspect ran up onto the stage prior to a speaking event at the Chautauqua Institution in Chautauqua and attacked 75-year-old Rushdie.

Rushdie was rushed to a nearby local hospital where he underwent surgery, while the attacker was taken into the New York State Police custody. The interviewer with Rushdie was also attacked during the incident and he suffered a minor head injury, the police said.

Authorities were still looking into Matar's nationality and his criminal records, if any.

A preliminary review of Matar's social media accounts by law enforcement showed him to be sympathetic to Shia extremism and the causes of the Islamic Revolutionary Guard Corps (IRGC), a law enforcement person with direct knowledge of the investigation told NBC News.

Though there are no direct links between Matar and the IRGC, law enforcement officers reportedly found images of slain commander Qassem Solemani and an Iraqi extremist sympathetic to the Iranian regime in a cell phone messaging app belonging to Matar, according to NBC News.

Soleimani was a senior Iranian military officer who served in the Islamic Revolutionary Guard Corps. From 1998 until his assassination in 2020.

Rushdie's book The Satanic Verses has been banned in Iran since 1988, as many Muslims consider it offensive to Islam.

The author spent about 10 years under police protection in the United Kingdom, living in hiding after Iran's late leader Ayatollah Ruhollah Khomeini issued a fatwa calling for Rushdie's execution.

A bounty of over USD 3 million has been offered for anyone who kills Rushdie, who has been a prominent spokesman for free expression and liberal causes.

Since 2000, Rushdie has lived in the United States.

Rushdie was being introduced at about 10:45 am when the assault happened, CNN quoted a witness as saying

The witness said he heard shouting from the audience.

He said a man in a black shirt appeared to be "punching" the author. The witness, who was 75 feet from the stage, did not hear the attacker say anything or see a weapon.

Some people in the audience ran to render aid while others went after the attacker, the witness said. State police said a doctor who was in the audience during the event rendered aid to Rushdie until emergency responders arrived.

New York Gov Kathy Hochul told reporters Friday a state trooper "stood up and saved (Rushdie's) life and protected him as well as the moderator who was attacked as well."

One witness of the attack told CNN there were no security searches or metal detectors at the event.

The suspect in Friday's attack had a "pass to access the grounds," Dr Michael E Hill, president of the Chautauqua Institution, said in the news conference. Guests can purchase passes to attend programs, Hill said.

Hill defended the institution's measures, saying, "We assess for every event what we think the appropriate security level is, and this one was certainly one that we thought was important which is why we had a State Trooper and Sheriff presence there," he said.

Staniszewski said there was no indication of any threat to the event and the state trooper was there because the event was a mass gathering and because of a request by the institution.

Joyce Lussier, 83, who was in the second row of the amphitheater during the attack, said Rushdie had taken a seat on the right-hand side of the stage when suddenly, a man who appeared to be in all black "lurched across the stage and got right to Rushdie."

"They caught him right away, he did not get off the stage at all," Lussier said of the suspect. "Shortly after, the crowd was asked to evacuate, " she added.

Another witness, a longtime Chautauqua resident who asked not to be identified, recalled a commotion on stage and a man making about seven to 10 stabbing motions in the direction of the author, who was in a half-standing position. She said she fled the open-air amphitheater "shaking like a leaf" in fear.