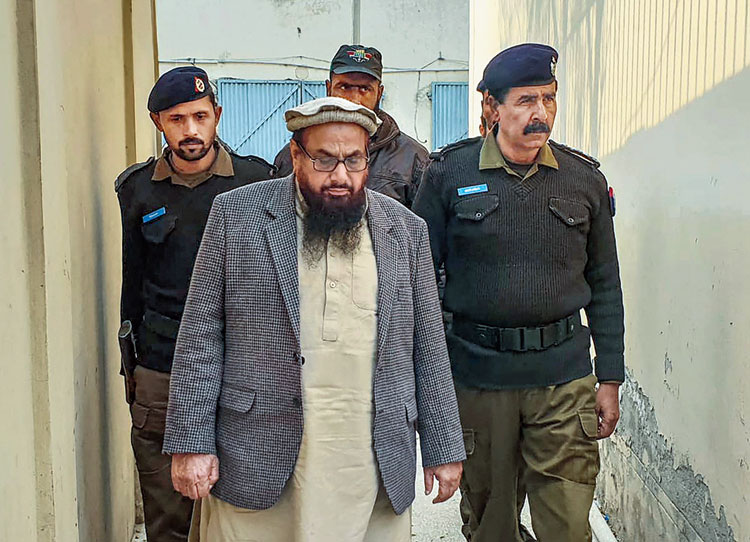 Hafiz Saeed, accused by India and the US of masterminding the 2008 attacks in Mumbai, was jailed for 11 years in Pakistan on Wednesday on terrorism financing charges, a government prosecutor and his defence lawyer said.

The Islamist leader was the first high profile figure convicted on terrorism financing charges in Pakistan, which denies regular accusations that it shelters militants.

Saeed was brought to court amid tight security. The judge found him guilty of being part of a terrorist outfit and for owning illegal property, prosecution and defence lawyers said.

Officials in the Punjab home department said, “Saeed will be imprisoned in Lahore’s Kot Lakhpat jail.”

The unprecedented ruling came ahead of a meeting of a world financial watchdog, Financial Action Task Force (FATF), next week to decide whether to blacklist Pakistan over a failure to curb terrorism financing.

Amid pressure from the FATF to take action against Saeed’s militant groups, Pakistan charged him in December with collecting funds for his organisations, which are listed as terrorist organisations by the UN. He pleaded not guilty. “Hafiz Saeed and another of his close aides have been sentenced in two cases of terrorism financing,” prosecutor Abdul Rauf Watto said.

“The total punishment in both the cases was 11 years but he will serve five and a half years in jail as the two punishments will run concurrently,” Saeed’s lawyer Imran Gill said. “We will appeal against the verdict.”

Saeed is the founder of Lashkar-e-Toiba (LeT), or the Army of the Pure, a group blamed by India and the US for the four-day Mumbai siege, in which 160 people, including Americans and other foreigners, were killed.

Saeed has denied any involvement and says his network, which spans 300 seminaries and schools, hospitals, a publishing house and ambulance services, has no ties to militant groups. It is funded by charities Jamat-ud-Dawa (JuD) and Falah-e-Insaniat Foundation (FIF).

The JuD said Pakistan had been taking what it said were illegal and unconstitutional actions lately against Saeed and the groups, under pressure from West, and to please the FATF.

Pakistan, included on a so-called grey list compiled by the FATF, has been under increasing pressure to curb the militants’ financing. Blacklisting would likely result in tough financial and banking curbs that could cripple Pakistan’s struggling economy.

The US has offered a reward of $10 million for information leading to the conviction of Saeed, who has been arrested and released several times over the past decade.

Washington has long pressured Pakistan to try Saeed, who is designated a terrorist by the US and the UN.

Saeed and his group’s charities had entered into the country’s politics under a plan backed by Pakistan’s army in a bid to integrate the militants in mainstream society. They contested the 2018 election under a new name, Milli Muslim League, but did not secure any seats.

Analysts say Saeed’s groups are considered part of state-backed proxies supported by Pakistan army to assert power in the region.