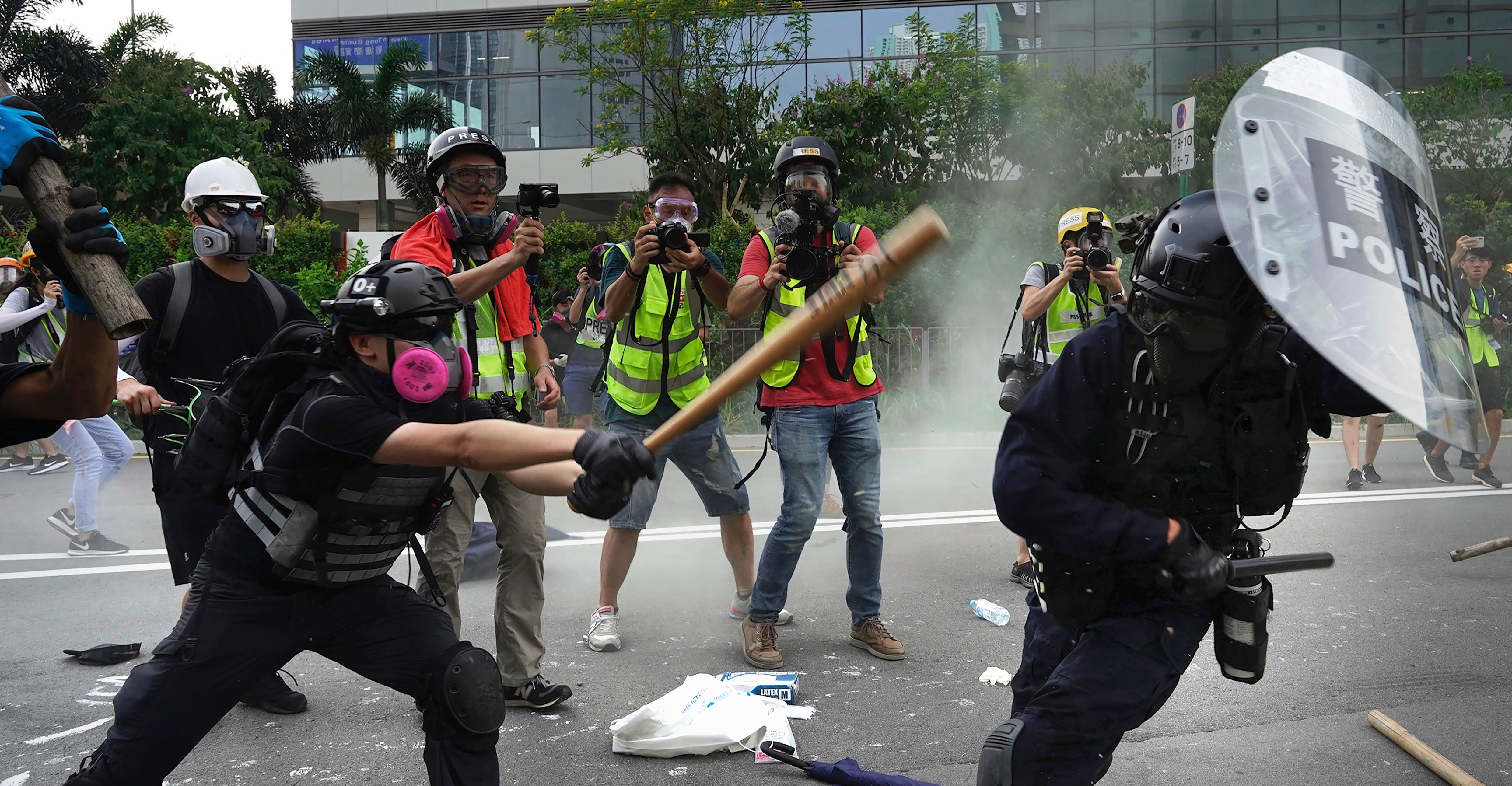 Hong Kong police fired tear gas and water cannon on Saturday as pro-democracy protesters threw petrol bombs in the latest in a series of clashes that have plunged the Chinese-ruled city into its worst political crisis in decades.

Police fired round after round of tear gas and protesters took cover behind umbrellas between the local headquarters of China’s People’s Liberation Army and the government. Protesters also threw bricks dug up from pathways at police.

The water cannon unleashed blue-dyed water, traditionally used elsewhere in the world to make it easier for police to identify protesters later.

Riot police then marched on foot towards the neighbouring Admiralty district, followed by 20 police cars, where protesters had thrown fire bombs from flyovers, some landing close to the police. Others shone blue and green lasers at police lines.

There were unconfirmed reports of an off-duty policeman being wounded.

In the Wanchai bar and restaurant district, police fought running battles with protesters, beating them with truncheons. There were several arrests.

The protests, which at one point blocked three key roads, came on the fifth anniversary of a decision by China to curtail democratic reforms and rule out universal suffrage in Hong Kong, a former British colony that was returned to China in 1997.

“It noted any discussions on constitutional development have to be premised on the legal basis, and be conducted under a peaceful atmosphere with mutual trust in a pragmatic manner.”

The People’s Liberation Army on Thursday rotated its troops in Hong Kong in what it said was a routine operation. Their Hong Kong HQ was the former base of the British military garrison.

Thousands took to the streets of the Asian financial hub for a largely peaceful, meandering rally in the afternoon rain. Many of them joined a “Christian march” from Wanchai and congregating next to the Legislative Council, stormed by activists in an earlier protest.

Other protesters, many wearing black and face masks, marched in the Causeway Bay shopping district. The crowds grew after dusk in Wanchai, where demonstrators built roadblocks and banged iron sticks. Firemen battled a huge blaze outside a Methodist church in the main Hennessy Road where water cannon moved in.

There were also standoffs in North Point and Fortress Hill, to the east of Causeway Bay, and tear gas was fired against protesters over the harbour in Tsim Sha Tsui.

The protests have gone on for three months, sometimes turning violent, and have targeted the airport, the legislature and the Liaison Office, the symbol of Chinese rule.

Hovering under an umbrella outside the government offices, Eric, a 22-year-old student, said telling people not to protest was like telling them not to breathe. “I feel it’s my duty to fight for democracy. Maybe we win, maybe we lose. But we fight.”

Police erected water-filled plastic barriers around key government buildings, and two water cannon, used briefly for the first time last weekend, were at the ready near the Liaison Office, still daubed with graffiti from an earlier protest.