Will not let their blood dry before they bombard settlements of the enemy, says Islamic Jihad 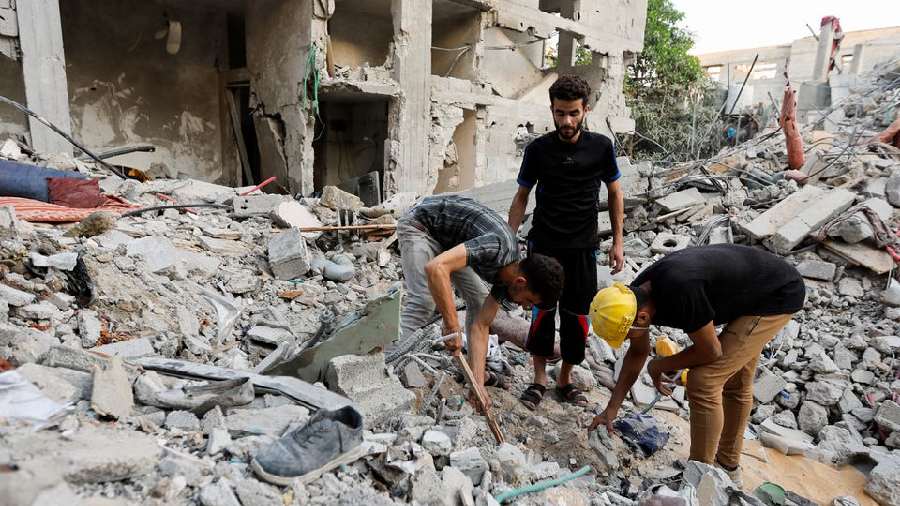 Palestinian militants fired rockets toward Jerusalem on Sunday, causing no casualties but signalling new reach and resolve as Israel pressed air strikes in the Gaza Strip for a third day and admitted Jewish visitors to a contested mosque compound.

Overnight, Khaled Mansour, a senior commander of the militant Islamic Jihad group, was killed in southern Gaza along with two associates and five other civilians, according to the group. Islamic Jihad said it would "not let their blood dry before they bombard the settlements of the enemy".

About 30 Palestinians, at least a third of them civilians and two of them senior Islamic Jihad commanders, have been killed in a surge of fighting in Gaza over the weekend, while rocket salvoes have sent tens of thousands Israelis to shelters.

Sirens warning of rockets sounded in Mevaseret Zion, Kiryat Anavim, Abu Ghosh and Kiryat Anavim, communities some 5 km (3 miles) west of Jerusalem. An Israeli military spokesperson said rockets fired at Jerusalem had been intercepted over those towns. There were no reports of casualties or damage.

The flare-up has worried world powers and prompted truce mediation by Egypt. It has been contained in part by the fact that Hamas, the governing Islamist group in the impoverished and blockaded Gaza Strip, has held fire.

"Quiet will be answered with quiet. If they keep firing, we will keep acting," an Israeli military spokesman said. "If they stand down and stop firing, it will be quiet."

Another potential flashpoint loomed, however, as Jews commemorating two temples destroyed in antiquity visited the Al Aqsa mosque compound in Jerusalem, where those Jewish shrines once stood. Palestinians deem such visits a religious and political affront.

Footage circulated online showed some Jews praying in the elevated stone plaza of the compound in violation of Israeli regulations, and police moving in to stop them as Palestinians shouted in protest.

Jews call the site the Temple Mount while Muslims refer to it as the Noble Sanctuary.

Israel launched the Gaza strikes on Friday in what it described as the pre-emption of an Islamic Jihad attack meant to avenge the arrest of a group leader in the occupied West Bank.

Overnight about 20 people were arrested in the West Bank, as security forces continued to pressure Islamic Jihad leadership outside the Gaza Strip.

The hundreds of rockets fired by Islamic Jihad in response is why the operation continues, Israeli Justice Minister Gideon Saar, a member of the decision-making security cabinet, said.

Asked on Israel's Army Radio whether an end might be close, he said: "I hope so, but I don't want to pin excessive hopes on that. To the extent that Islamic Jihad wants to protract this operation, it will regret it."

The Israeli military said rockets had been shot down by Iron Dome interceptors with a 97% success rate.

Islamic Jihad said it fired the rockets in retaliation for Israel's killing of its southern Gaza commander, two other militants and five civilians on Saturday.