Earlier this month, Wa Lone and Kyaw Soe Oo shared with their colleagues the Pulitzer Prize for international reporting 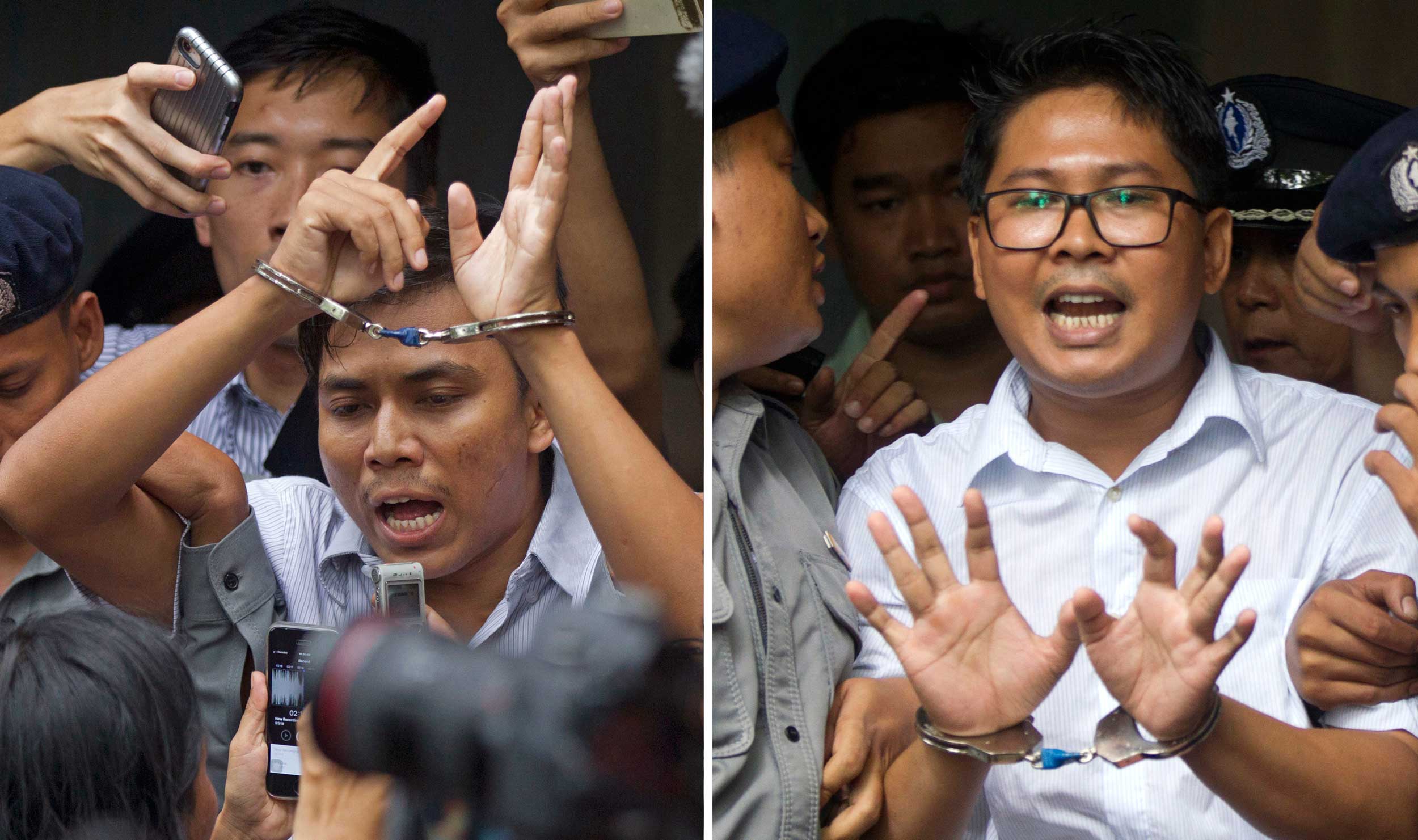 Myanmar's Supreme Court on Tuesday rejected the final appeal of two Reuters journalists and upheld the seven-year prison sentences for their reporting on the military's brutal crackdown on Rohingya Muslims.

Earlier this month, Wa Lone and Kyaw Soe Oo shared with their colleagues the Pulitzer Prize for international reporting. The reporters were arrested in December 2017 and sentenced last September after being accused of illegally possessing official documents, a violation of a colonial-era law.

The court did not given a reason for its decision. Wa Lone and Kyaw Soe Oo, who are being held in a prison in Yangon, were not present for the ruling, but their wives were. Kyaw Soe Oo's wife, Chit Su, broke down in tears when the ruling was read.

'Both he and I hoped for the best,' Chit Su said. 'I am terribly sad for this decision.'

Wa Lone, 32, and Kyaw Soe Oo, 28, had denied the charges against them and contended they were framed by police. International rights groups, media freedom organisations, UN experts and several governments condemned their conviction as an injustice and an attack on freedom of the press.

'Wa Lone and Kyaw Soe Oo did not commit any crime, nor was there any proof that they did,' Gail Gove, Reuters chief counsel, said in a statement after the ruling. 'Instead, they were victims of a police setup to silence their truthful reporting. We will continue to do all we can to free them as soon as possible.'

Khin Maung Zaw, a lawyer for the two, said the pair could still seek their freedom by petitioning the president's office or the legislature.

President Win Myint could reduce the sentence, order a retrial or have them released. Legislative action for a retrial would be a lengthier, more complicated process.

'I am greatly disappointed by the decision of the court because it damaged very much our country's prestige and our right of information and press freedom, it damaged very much,'Khin Maung Zaw said. But, I'm not losing hope completely, because all the whole world is on our side. So, as I always said, the case was lost, but the cause was won throughout the whole world. '

Myanmar's military launched a brutal counterinsurgency campaign in the western state of Rakhine in 2017, driving more than 700,000 members of the Rohingya minority to flee to Bangladesh.

Reporting on the crackdown has proven sensitive in Buddhist-dominated Myanmar, where many support the campaign and bristle at worldwide condemnation of the military's alleged human rights abuses.

The military has denied it any rights abuses and says the campaign is a response to a series of attacks on security personnel by Rohingya insurgents.

The Reuters reporters had worked on an investigation of the killing of 10 Rohingya villagers in Inn Din village, for which the government last year said seven soldiers were sentenced to up 10 years in prison with hard labour.

Investigators working for the U.N.'s top human rights body said last year that genocide charges should be brought against senior Myanmar military officers, while other critics accused the army of ethnic cleansing.

Prosecution witnesses at the reporters' trial gave confusing and conflicting testimony, lending weight to the belief that the arrests were a clumsy setup by the government.

The reporters' claim that they were framed was supported by surprise testimony from a whistleblower in the police department, Police Capt. Moe Yan Naing.

Although summoned as a prosecution witness, he told the court that his superior had arranged for two policemen to meet the reporters at a restaurant and hand over documents described as 'important secret papers' in order to entrap them.

As a result of his testimony, he was jailed for a year for violating the Police Disciplinary Act and his family was forced to leave their police housing unit.

A report released in February by Human Rights Watch noted that expectations of a new era of freedom of expression under the government of democracy icon Aung San Suu Kyi remain unfulfilled nearly three years after her party ended more than five decades of harsh military rule.

The military, however, remains powerful and controls key ministries that are not under civilian oversight, such as defence and internal security.

The report said Suu Kyi's government has failed to roll back many of the legal restrictions on freedom of speech and assembly, and has instead toughened some of those laws and enacted a new measure limiting free speech.

Journalists have been some of the most high-profile targets. The report cited a Myanmar freedom of expression organisation, Athan, as saying that at least 43 journalists have been arrested from when Suu Kyi's government took power in 2016 through last September.

In a new case, the online magazine The Irrawaddy reported Monday that it has been sued by the army for its coverage of recent fighting between the government and the Arakan Army ethnic rebel group.

It said the suit was filed under Article 66(d) of the Telecommunications Law, which provides for up to three years in prison for 'extorting, coercing, restraining wrongfully, defaming, disturbing, causing undue influence or threatening any person using a telecommunications network.'

There has been an upsurge of fighting since late last year involving attacks by the Arakan Army, which is aligned with Rakhine state's Buddhist population and seeks autonomy for the region.