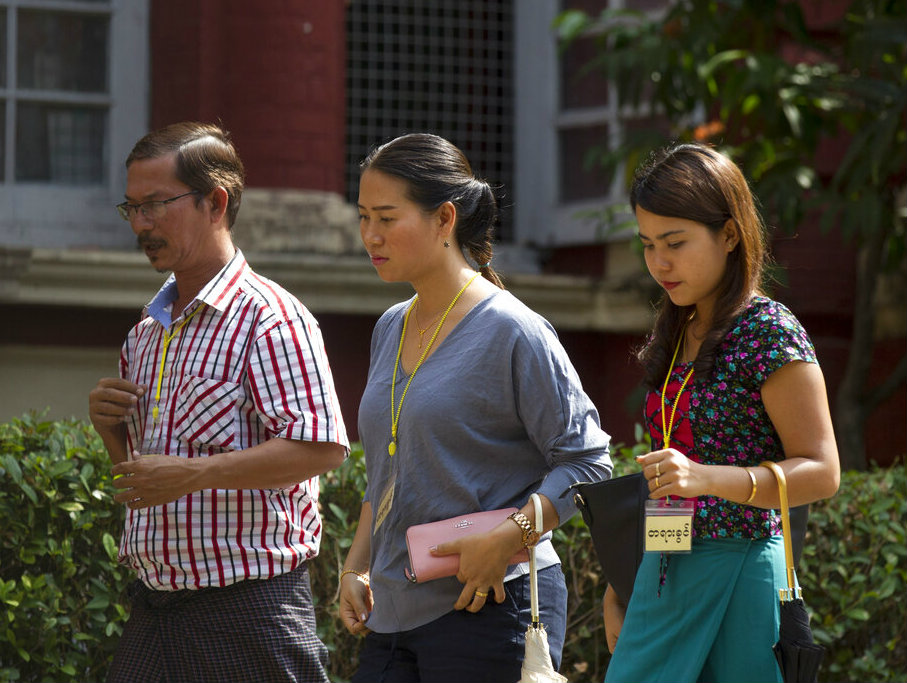 A court in Myanmar on Friday rejected the appeal of two Reuters journalists convicted of violating the country's Official Secrets Act during their reporting on the country's crackdown on Rohingya Muslims, and maintained the seven-year prison terms they were sentenced to last year.

Judge Aung Naing said in his ruling that lawyers for the men failed to submit enough evidence to prove their innocence.

The conviction of Wa Lone and Kyaw Soe Oo has drawn condemnation from rights groups, Western governments and global press associations and has raised questions about press freedom in Myanmar as it transitions from a decades of military rule.

The men were convicted for having government documents in their possession. They were arrested on December 12, 2017, in the country's main city, Yangon, immediately after having a meal to which police officers had invited them.

Reuters journalists Kyaw Soe Oo (left) and Wa Lone are escorted by police out of the court in Yangon on September 3, 2018.
AP

The reporters have contended they were framed by police because of official displeasure over their reporting on the brutal crackdown by security forces on minority Rohingya in Myanmar's Rakhine state.

More than 700,000 Rohingya have fled to neighboring Bangladesh in a crackdown that began in August 2017. Critics have described the campaign as ethnic cleansing, or even genocide on the part of Myanmar security forces.

Wa Lone, 32, and Kyaw Soe Oo, 28, had worked on one of the most detailed accounts of official abuses, an investigation of the killing of 10 Rohingya villagers in Inn Din village, for which seven soldiers were eventually sentenced to up to 10 years in prison with hard labor.

'Today's ruling is yet another injustice among many inflicted upon Wa Lone and Kyaw Soe Oo,' Reuters editor-in-chief Stephen J. Adler said in a statement issued shortly after the judge's ruling. 'They remain behind bars for one reason: Those in power sought to silence the truth. Reporting is not a crime, and until Myanmar rights this terrible wrong, the press in Myanmar is not free, and Myanmar's commitment to rule of law and democracy remains in doubt.'

European Union ambassador to Myanmar Kristian Schmidt, who attended the hearing, described the ruling as 'a great disappointment and a missed opportunity to correct a wrong that has been committed against the two journalists'.

'It casts serious doubts on the independence of the judiciary of Myanmar and for people's right to information and learning the truth,' he said.

He called for Myanmar's president to have the journalists released immediately and unconditionally.

Lawyers for the men, who did not attend Friday's hearing, had previously said that if their appeal failed, the men would have to hope for a pardon or general amnesty to obtain an early release.