Advertisement
Home / World / Marburg virus outbreak in Ghana: What you need to know

Marburg virus outbreak in Ghana: What you need to know 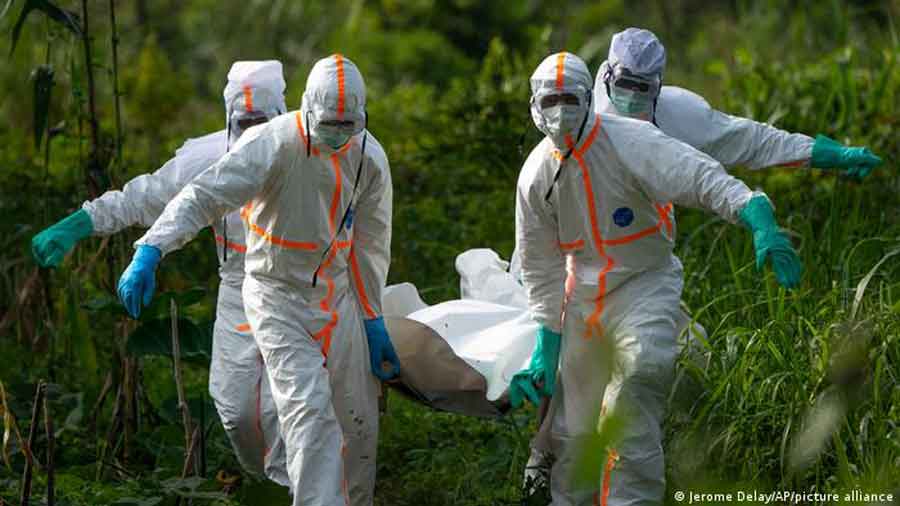 Burial workers carry the remains of an Ebola victim in Congo, which has seen outbreaks of the illness similar to Marburg virus in past years.
Deutsche Welle
Deutsche Welle   |   Published 20.07.22, 09:43 PM

An outbreak of the life-threatening Marburg virus has been declared in the western African country of Ghana, the World Health Organization (WHO) says.

The outbreak was announced after the confirmation of positive samples from two men in southern Ghana that were tested in a lab in Senegal.Both men, who were not related, died in late June after seeking treatment at the same hospital, according to the WHO.

At least 90 people have been deemed suspected contacts and are in quarantine.The first patient, a 26-year-old man, died one day after checking into the hospital on June 26. The other, a 51-year-old man, died June 28, the same day he checked in.

The men suffered from diarrhea, fever, nausea and vomiting, the WHO said.The outbreak comes a little less than a year after neighboring Guinea confirmed its own outbreak, which featured a single case and was declared over in September 2021.

What are the symptoms?

The Marburg pathogen is one of the most dangerous known to virologists. It can infect and destroy blood, liver and skin cells, allowing it to spread very quickly and extensively throughout the body.After an incubation period of five to 10 days, patients usually have a fever, headache and muscle pain, as well as bleeding in the skin and mucous membranes. The mouth, eyes, gastrointestinal tract and internal organs are also often affected.Symptoms of neurological paralysis are observed in severe cases, as well as a state called "hemorrhagic shock," which can lead to organ and circulatory failure. Without intensive medical care, most of those infected die.

How is the pathogen transmitted?

The virus is transmitted through bodily fluids such as blood, urine or saliva.Outside the body, the virus does not last long, making airborne droplet infections rare.

Is there a vaccine against the Marburg virus?

Regulators have not approved vaccines against the Marburg virus, but they do exist, Stephan Becker, director of the institute for virology at the University of Marburg, told DW."It's actually not difficult to develop vaccines against Marburg virus, and there are already vaccines that work very well in animal models. But the clinical studies required for approval have so far been lacking," Becker said.

Unlike with outbreaks such as COVID-19, there is a lack of political will and economic incentive to produce a vaccine, he added."It's exactly the same situation as with Ebola in 2013," Becker said. "We got together with many others at the time and carried out Phase I studies relatively quickly, which then were completed by Phase II and Phase III studies in West Africa.

A vaccine has been developed against Ebola. It could be used to guard against the Marburg virus, too, experts say.
Deutsche Welle

The vaccine was really very good and the pharmaceutical company Merck then produced many hundreds of thousands of doses for an outbreak of the Ebola virus in the Congo in 2018."This vaccine has since been approved."There is also a very similar vaccine against the Marburg virus that is possibly even better than the one against the Ebola virus," Becker said.

"In monkeys, the vaccine was even effective after infection, so it works as a kind of therapeutic vaccination."Once the necessary clinical trials have been completed and the required approval obtained, a vaccine could be produced quickly, Becker said.Since the Marburg virus and the Ebola virus are similar, Becker said the development of a combination vaccine is possible.

How is Marburg virus treated?

Infected people often have to be treated in isolated intensive care units due to the high risk of transmission.So far, however, doctors can only treat the symptoms via infusions to prevent fluid loss and electrolytes to replace blood salts and glucose to regulate the sugar balance.

Other medications can stabilize blood pressure, reduce fever and stop diarrhea and vomiting. In the event of heavy bleeding, the patient is given blood and coagulation factors.

Becker also said drugs known for their association with COVID-19 could be used to treat Marburg virus. One example, he said, could be remdesivir, which was originally developed to treat Ebola."The enzyme that replicates the RNA of the virus is relatively similar between the Marburg and Ebola viruses," he said.

Antibodies could also be used as a potential treatment, he said, but added that vaccination is still the most effective way to combat the virus.How common is Marburg virus?With the exception of an outbreak in the central German cities of Marburg and Frankfurt, and the Serbian capital of Belgrade in 1967, the Marburg virus has solely occurred in isolated cases or small epidemics in sub-Saharan African countries such as Angola, the Democratic Republic of the Congo, South Sudan, Gabon and Uganda.

The Marburg virus is likely passed to humans via fruit bats.

According to the WHO, the most recent case of the Marburg virus was detected in Ghana's southern Ashanti region."Health authorities have responded swiftly, getting a head start preparing for a possible outbreak. This is good because without immediate and decisive action, Marburg can easily get out of hand. WHO is on the ground supporting health authorities and now that the outbreak is declared, we are marshaling more resources for the response," said Matshidiso Moeti, WHO Regional Director for Africa.

Where does the Marburg virus come from?

The virus was named after the small German town of Marburg, where it was first detected. In 1967, several laboratory employees in Marburg, Frankfurt and Belgrade were simultaneously infected with the virus from a monkey imported from Uganda.Fruit bats likely serve as a natural reservoir for the Marburg virus, which is transmitted to monkeys or humans through contact with the animals or their body fluids. Eating infected wild animals can also lead to infection.