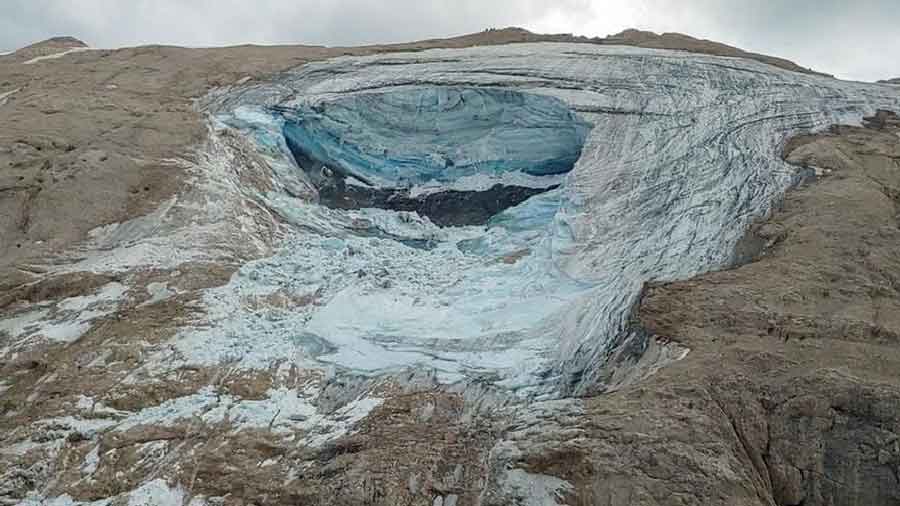 A large chunk of glacier broke off near the Marmolada peak in the Italian Alps, sending ice and rock careening down onto a popular hiking trail
Deutsche Welle
Published 03.07.22, 09:37 PM

A large chunk of glacier broke loose and slammed into hikers on the Marmolada mountain in the eastern Dolomites, rescue services said. At least five people have been killed.

At least five people were killed Sunday when a glacier ruptured and slid down the mountainside in the Italian Alps, local rescue services said.

Eight people were injured during the accident on the Marmolada peak of the eastern Dolomites, according to Italian state television RAI.

Local media described how masses of ice, snow and debris slid down the mountain before hitting the hikers.

Those hurt, including a person in critical condition, were taken to several hospitals in the regions of Trentino-Alto Adige and Veneto, according to rescue officials.

They said at least five helicopters and rescue dogs were deployed during the search.

Rescue workers had to proceed with caution due to the risk of further collapse of the ice and rock, dpa news agency reported.

18 hikers nearby during collapse

Emergency dispatchers in northeast Italy tweeted that about 18 hikers were believed to have been in the area at the time of the rupture.

"We heard a loud noise, typical of a landslide," an eyewitness told the Ansa news agency. "After that, we saw an avalanche of snow and ice heading towards the valley at high speed and we knew something bad had happened."

The Alpine rescue service said in a tweet that a segment of glacier broke off near Punta Rocca (Rock Point), "along the itinerary normally used to reach the peak."

The piece is known as a serac, or pinnacle of a glacier.

It wasn't immediately clear what caused the ice segment to break away and rush down the slope.

Marmolada, towering about 3,300 meters (about 11,000 feet), is the highest peak in the eastern Dolomites.

The glacier feeds the Avisio River and overlooks Lake Fedaia.