The holy city has been tense during Ramazan, with sporadic unrest; possible evictions of Palestinians from homes claimed by Jewish settlers adds to the friction 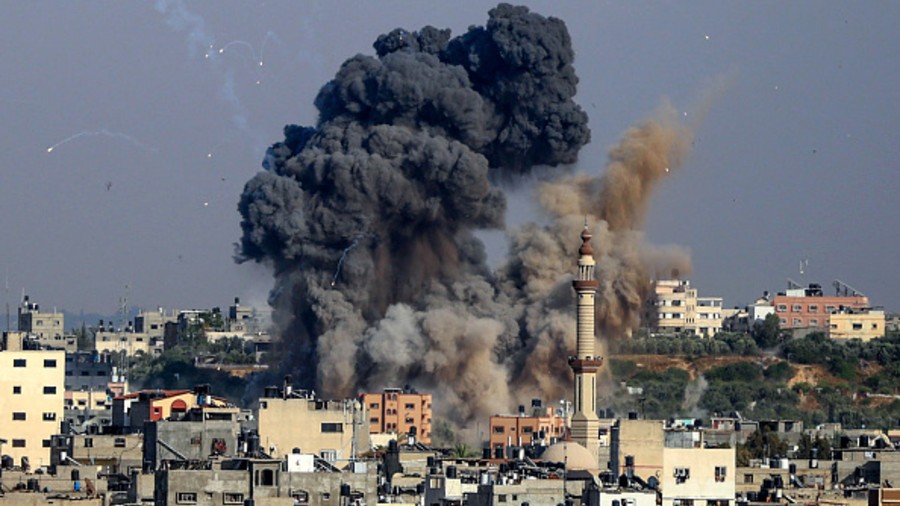 Israel intensified its air strikes on Gaza on Tuesday as rocket barrages hit Israeli towns for a second day in a deepening conflict in which at least 28 people in the Palestinian enclave and two in Israel have been killed.

The most serious outbreak of fighting since 2019 between Israel and armed factions in Hamas-run Gaza was triggered by clashes between Palestinians and Israeli police at Al Aqsa mosque in Jerusalem on Monday.

The holy city has been tense during Ramazan, with sporadic unrest and possible evictions of Palestinians from homes claimed by Jewish settlers in a court case adding to the friction. Prime Minister Benjamin Netanyahu said Israel would step up its strikes on Gaza in the face of the surge in rocket attacks.

“At the conclusion of a situational assessment, it was decided that both the strength of the attacks and the frequency of the attacks will be increased,” he said in a video statement.  Within an hour, Israel had intensified its air strikes in and around Gaza City, a Reuters witness said, with plumes of smoke rising from densely-populated residential areas.

The Gaza health ministry said at least 28 Palestinians, including 10 children, had been killed and 152 wounded by Israeli strikes in the enclave of two million people since Hamas on Monday fired rockets towards Jerusalem for the first time since 2014.

In the town of Beit Hanooun in northern Gaza, Abdel-Hamid Hamad said his nephew Hussein, 11, was killed on Monday in what residents said was an Israeli air strike. He told Reuters the boy was collecting wood when he was hit.

“Gaza has had enough, and nothing makes a difference now. Our children are getting killed. What should we do?” Hamad said.

In Barzilai hospital in Ashkelon, an Israeli woman treated for injuries after her apartment was hit by a Palestinian rocket recalled moments of panic.

An air conditioner fell on her and one of her children during the night and a bathroom door fell on her husband’s head, the woman told Channel 13 TV. Israel has also seen a spread of pro-Palestinian protests, some violent, among its Arab minority. In the ethnically mixed town of Lod, witnesses quoted by Israeli media said one or two armed Jews shot at rioting Arabs, killing one.