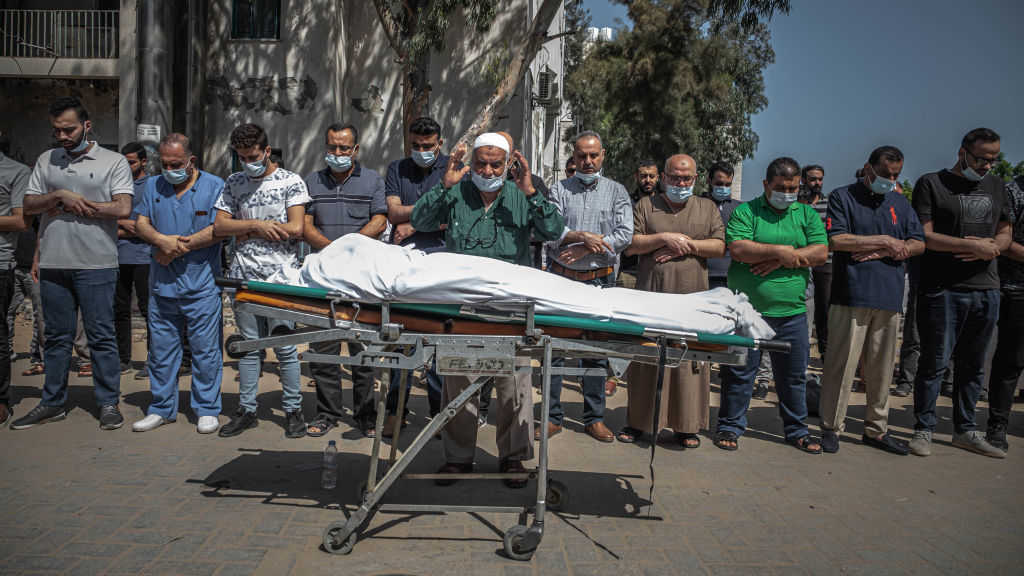 An Israeli air strike in Gaza destroyed several homes on Sunday, killing 42 Palestinians, including 10 children, health officials said, as militants fired rockets at Israel with no end in sight to seven days of fighting.

The Israeli military said the civilian casualties had been unintentional and that it had attacked a tunnel system used by militants, which collapsed, bringing the homes down with it.

Netanyahu also defended an Israeli air strike on Saturday that destroyed a 12-storey building where the Associated Press and the Al Jazeera TV network had offices. He said the structure also housed a militant group’s intelligence office and was thus a legitimate target.

“We are acting now, (and) for as long as necessary, to restore calm and quiet to you, Israel’s citizens. It will take time,” Netanyahu said in a televised address after meeting with his security cabinet.

The death toll in Gaza overnight jumped to 188, including 55 children, its health ministry said, amid an intensive Israeli air and artillery barrage since the fighting erupted last Monday. Ten people have been killed in Israel, including two children, according to Israeli authorities.

At the homes destroyed during the Israeli attack in a Gaza neighbourhood early on Sunday, Palestinians working to clear rubble from one of the wrecked buildings recovered the bodies of a woman and man. “These are moments of horror that no one can describe. Like an earthquake hit the area,” said Mahmoud Hmaid, a father of seven who was helping with the rescue efforts.

Across the border in the Israeli city of Ashkelon, Zvi Daphna, a physician whose neighbourhood has been struck by several rockets, described a feeling of “fear and horror”.

In New York, UN secretary-general Antonio Guterres told the Security Council that hostilities in Israel and Gaza were “utterly appalling” and called for an immediate end to fighting.

He said the UN was “actively engaging all sides toward an immediate ceasefire” and urged them “to allow mediation efforts to intensify and succeed”.

In his address in Israel, Netanyahu said he wanted to “exact a price from the aggressor” and restore deterrence to prevent future conflict.

On US network CBS’s Face the Nation programme, Netanyahu said Israel had passed information to US authorities about Saturday’s attack on the al-Jala building. Israel had given advance warning to occupants of the building to leave.

The Associated Press condemned the strike and had asked Israel to put forward its evidence that Hamas was in the building.

There was “an intelligence office for the Palestinian terrorist organisation housed in that building that plots and organises terror attacks against Israeli civilians, so it’s a perfectly legitimate target”, Netanyahu said.

An official with first-hand knowledge of Amr’s meetings in Israel said: “He voiced what the administration has been saying openly about Israel having full US support for defending itself.

“He made clear that no one expects Israel to do otherwise, and that this is clearly not something that can be wrapped up in 24 hours.”