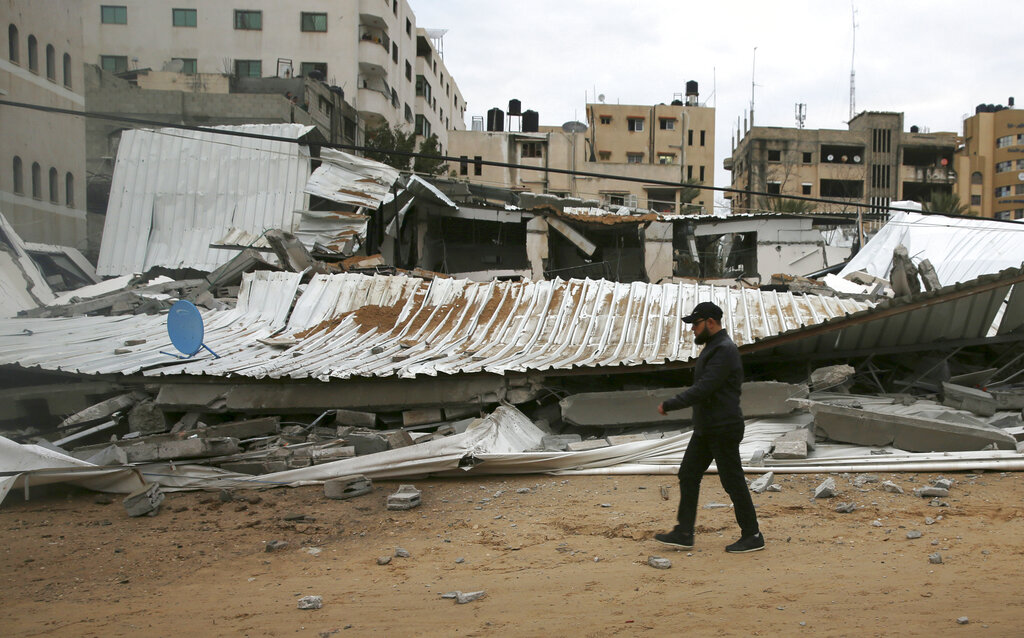 A Palestinian inspects the damage to a building that belongs to the Hamas ministry of prisoners, which was hit by Israeli airstrikes in Gaza City, early on Friday.
AP
AP   |   Jerusalem   |   Published 15.03.19, 07:16 AM

Israeli warplanes on Friday struck some 100 Hamas targets in the Gaza Strip in response to a rare rocket attack on the Israeli metropolis of Tel Aviv. Rocket fire persisted throughout the morning, setting the stage for additional possible reprisals.

The army said that its targets had included an office complex in Gaza City used to plan and command Hamas militant activities, an underground complex that served as Hamas's main rocket-manufacturing site, and a centre used for Hamas drone development. There were no reports of casualties.

The late-night attack on Tel Aviv, Israel's densely populated commercial and cultural capital, marked a dramatic escalation in hostilities. It was the first time the city had been targeted since a 2014 war between Israel and Gaza militants.

Hamas denied responsibility for the initial rocket attack, saying it went against Palestinian interests. But after a preliminary investigation, Israel said it had concluded that the militant group was behind the attack.

Following the Israeli airstrike, several additional rounds of rocket fire were launched into Israel. The military said several rockets were intercepted by its air defence systems, and there were no reports of injuries.

The fighting broke out as Egyptian mediators were in Gaza trying to broker an expanded cease-fire deal between the bitter enemies.

The initial blasts from the Israeli airstrikes in southern Gaza were so powerful that smoke could be seen in Gaza City, 25 km to the north. The Israeli warplanes could be heard roaring through the skies above Gaza City. 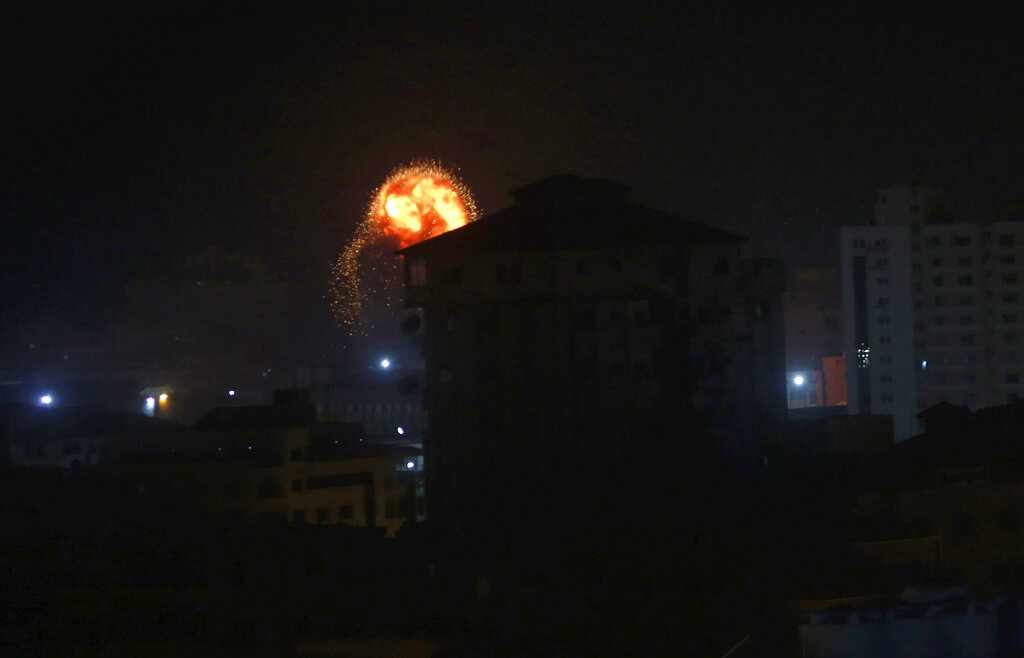 An explosion caused by Israeli airstrikes is seen on Gaza City early on Friday.
AP

Israel and Hamas are bitter enemies and have fought three wars since the Islamic militant group seized power in Gaza in 2007. Smaller flare-ups have occurred sporadically since Israel and Hamas fought their last war, in 2014.

The sudden outburst of fighting comes at a sensitive time for both sides. Israel is holding national elections in less than a month. Netanyahu is locked in a tight fight for re-election and could face heavy criticism from his opponents if he is seen as ineffective against the militants.

Cabinet minister Naftali Bennett, a hard-line rival of Netanyahu's, called on the Prime Minister to convene a gathering of his Security Cabinet and demand the army 'present a plan to defeat Hamas'.

Likewise, Hamas has come under rare public criticism in Gaza for the harsh conditions in the territory. An Israeli-Egyptian blockade, combined with sanctions by the rival Palestinian Authority and mismanagement by the Hamas government, have fueled an economic crisis in the territory. Residents have little desire for another war with Israel.

Earlier on Thursday, Hamas police violently broke up a small protest over the harsh living conditions.

Brig. Gen. Ronen Manelis, the chief Israeli military spokesperson, said the army had been caught off guard by Thursday night's rocket barrage and had no advance intelligence.

Israel holds Hamas responsible for all fire coming out of the territory. Hamas possesses a large arsenal of rockets and missiles capable of striking deep inside Israel.

But with Gaza's economy in tatters, the group has been seeking to preserve calm.

Hamas denied responsibility for the attack on Tel Aviv, saying the rockets were launched when the group's military wing was meeting with the Egyptian mediators.

In an unusual step that indicated Hamas was attempting to prevent further escalation, the Hamas interior ministry said the rocket fire went 'against the national consensus' and promised to take action against the perpetrators.

But Israel's military concluded that Hamas was responsible. In a statement early on Friday, the army said 'we can confirm' that Hamas carried out the rocket attack.

Islamic Jihad, an Iranian-backed militant group that also has a large rocket arsenal, too, denied firing the rockets. Smaller factions inspired by the Islamic State group also sometimes fire rockets, though it is unclear whether they possess projectiles capable of reaching Tel Aviv.

At the time, Netanyahu issued a warning to Hamas, rejecting suggestions that Israel would be reluctant to take tough action in Gaza ahead of national elections next month.

'I suggest to Hamas, don't count on it,' he told his cabinet. 'We will do anything necessary to restore security and quiet to the area adjacent to the Gaza Strip and to the south in general.'