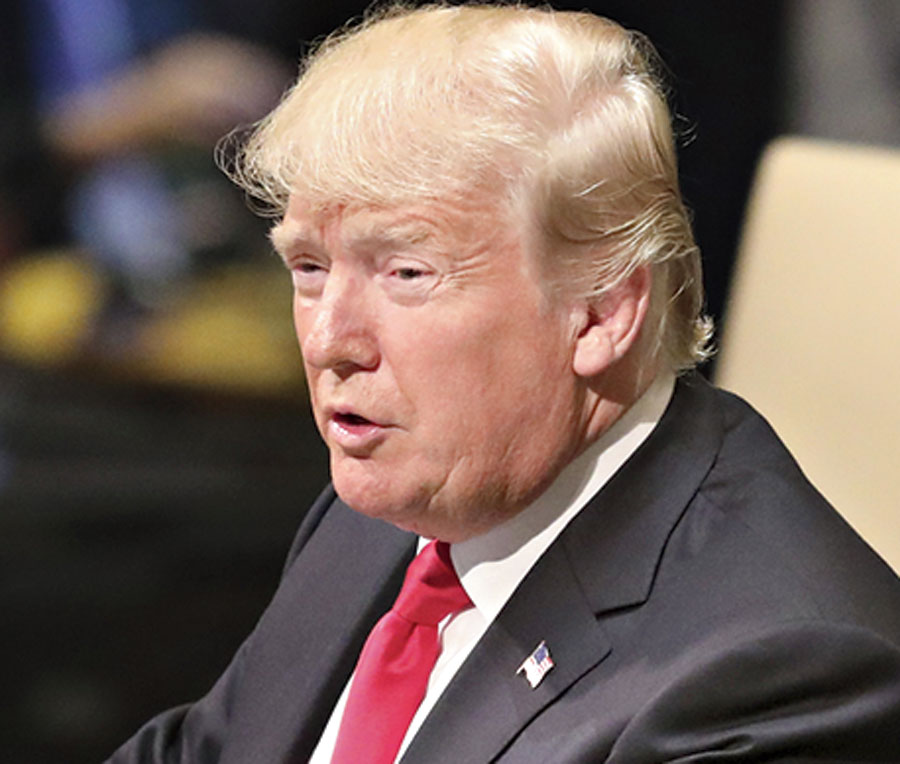 President Donald Trump blasted Iran on Tuesday as a “corrupt dictatorship” that is plundering its people to pay for aggression abroad, using his speech to the UN General Assembly to threaten more sanctions against Tehran.

“Iran’s leaders sow chaos, death and destruction,” Trump told the annual gathering. “They do not respect their neighbours or borders or the sovereign rights of nations.”

Trump’s speech in the green-marbled UN hall, while relatively low key, was aimed squarely at Iran, which the US accuses of harbouring nuclear ambitions and fomenting instability in West Asia through its support for militant groups in Syria, Lebanon and Yemen.

But much of his 35-minute address was a defence of his “America First” policies of putting US interests ahead of any move towards globalism, a message that was greeted by silence in the hall.

Besides calling out Iran, Trump also criticised China for its trade practices but made no mention of Russia’s interference in Syria or meddling in US elections.

Trump, who begins his political rallies with boasts about his economic record in less than two years in office, used the same rhetoric before the crowd of world leaders and diplomats, telling them he had accomplished more than almost any previous US President.

The remark led to some murmuring and laughter in the crowd, taking the President slightly aback.

“I didn’t expect that reaction, but that’s okay,” he said.

Trump, who said in a Twitter post on Tuesday morning that he had given up hope for a meeting with Iranian President Hassan Rouhani while both were in New York, said he would keep up economic pressure on Tehran to try to force a change in its behaviour.

In May, he withdrew the US from the 2015 international deal to put curbs on Iran’s nuclear programme in exchange for easing sanctions. Foes for decades, Washington and Tehran have been increasingly at odds since May. The accord with Opec member Iran was negotiated under Democratic President Barack Obama.

“Additional sanctions will resume on November 5th and more will follow and we are working with countries that import Iranian crude oil to cut their purchases substantially,” Trump said.

He said the US would help create a regional strategic alliance between Gulf nations and Jordan and Egypt, an initiative that the US sees as a bulwark against Iran.

Trump compared US relations with Iran to what he called improved ties with North Korean leader Kim Jong-un, who Trump had met in Singapore in June as part of a still-unfulfilled drive to get Pyongyang to give up its nuclear weapons.

In his address last year to the UN, Trump insulted Kim as a “rocket man” bent on nuclear destruction. On Tuesday, Trump praised Kim for halting nuclear and missile tests, releasing Americans held prisoner and returning some remains of US soldiers killed in the 1950s Korean War.

The two leaders are trying to arrange a second summit and are exchanging private correspondence. Trump has said sanctions on North Korea would remain for now.

Delivering a harsh message to Opec members, Trump called on them to stop raising oil prices and to pay for their own military protection. He threatened to limit US aid only to countries that are friendly to the United States. A Gulf diplomat said in response that “we have been doing our fair share of burden sharing”.

In remarks to reporters on his way to his speech, Trump said he would not meet the Iranians until they “change their tune”. He held out the possibility of a better relationship in the future.