Advertisement
Home / World / Iran fires missiles into Syria, with a message for US, Israel and Saudi Arabia

Iran fires missiles into Syria, with a message for US, Israel and Saudi Arabia 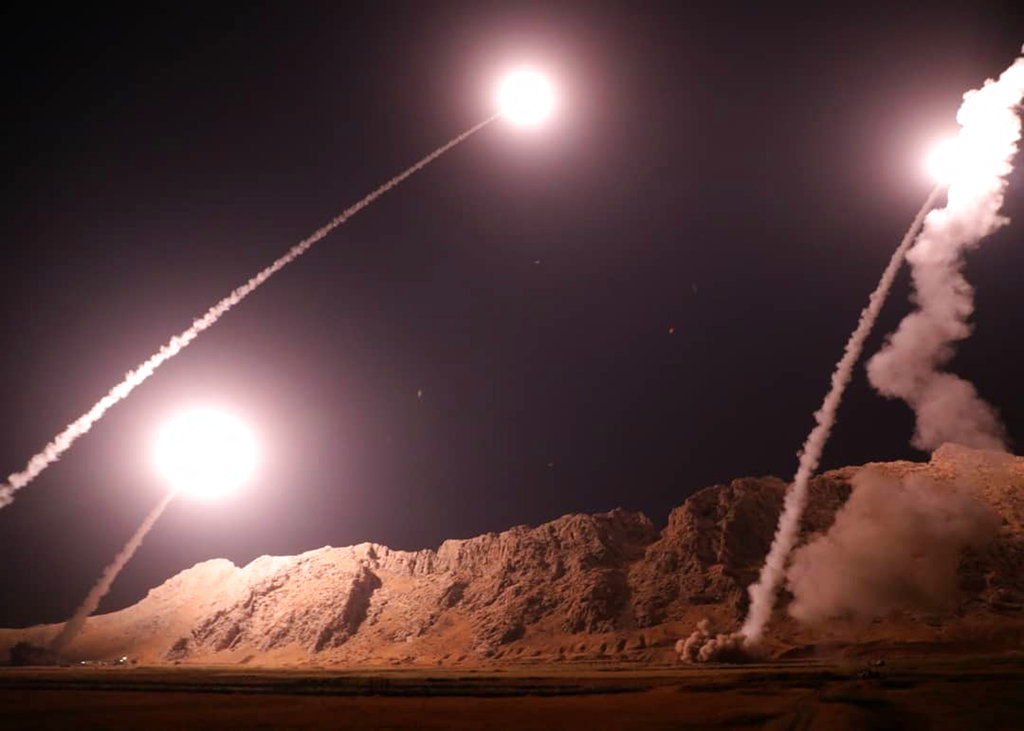 In this photo released on Monday by the Iranian Revolutionary Guard, missiles are fired from the city of Kermanshah in western Iran targeting the Islamic State group in Syria.
Sepahnews via AP
AP   |   Tehran   |   Published 01.10.18, 06:40 AM

The launch saw the Guard fire missiles with enough range to strike regional US military bases and targets inside both Saudi Arabia and the United Arab Emirates.

Iran’s supreme leader has called out those two nations by name, accusing them of being behind the September 22 attack on the parade in the Iranian city of Ahvaz, something denied by both Riyadh and Abu Dhabi.

The strike on Monday marked the second-such attack by Iran in a month’s time and highlighted the greater tension felt across the Mideast as US sanctions targeting Tehran’s oil industry will take effect in early November.

“This is the roaring of missiles belonging to the Revolutionary Guard of the Islamic Revolution,” the state TV’s reporter said as the missiles launched behind him. “In a few minutes, the world of arrogance — especially America, the (Israeli) Zionist regime and the Al Saud — will hear the sound of Iran's repeated blows.” Al Saud is a reference to Saudi Arabia's royal family.

Boukamal is held by forces loyal to Syria’s embattled President Bashar Assad. However, the city has been targeted even now by IS militants who have lost almost all the territory they once held in both Syria and Iraq.

Rami Abdurrahman, who heads the Britain-based Syrian Observatory for Human Rights, told The Associated Press that the Iranian missiles hit the IS-held town of Hajin, just north of Boukamal.

Strong explosions shook the area in the early hours of Monday, reverberating east of the Euphrates River, he said. The area of Hajin and IS militants there have been under attack for weeks by US-backed Kurdish-led fighters. The US military’s Central

Two men hold up anti-American and anti-Israeli placards in a rally in Tehran on Friday.
AP

Command, which is aiding Kurdish forces, did not immediately respond to a request for comment.

A Syria-based official with the so-called “Axis of Resistance” led by Iran, which includes Iran, Syria, the Lebanese militant Hezbollah and other groups fighting alongside Assad’s forces said the missiles hit “the last pocket held by Daesh” in Syria, using an Arabic term to refer to IS.

The official spoke to the AP via text messages from Syria on condition of anonymity because he was not authorised to talk to journalists. IS militants did not immediately acknowledge the attack.

The missile launch further adds to confusion over who carried out the assault on a military parade in the Iranian city of Ahvaz on September 22 that killed at least 24 people and wounded over 60.

Iran initially blamed Arab separatists for the attack in which gunmen disguised as soldiers opened fire on the crowd and officials watching the parade from a viewing platform in the southwestern city. Arab separatists also immediately claimed the attack and offered details about one of the attackers that ultimately turned out to be true.

The separatists want to see that oil-rich region of Iran break away from Tehran’s theocratic government and accuse its Persian officials of discriminating against their minority. Previously, they only attacked targets like unguarded oil pipelines at night.

The Islamic State group also claimed responsibility for the Ahvaz assault, but initially made factually incorrect claims about it. Later, IS released footage of several men that Iran ultimately identified as attackers, though the men in the footage never pledged allegiance to the extremist group.

In announcing the launch, Iranian state media said the missiles targeted both “takfiri” militants — a term it often applies to the Islamic State group — and Ahvazi separatists. The separatists have not been known to work with IS in the past.

Mohsen Rezaei, who formerly led the Guard, praised the missile strike on Twitter, adding that the “main punishment is on the way”, suggesting more attacks could be imminent.

The strike may have been for an entirely different audience, however.

The semi-official Fars news agency, believed to be close to the Guard, identified the six missiles used as Zolfaghar and Qiam variants, which have ranges of 750 km and 800 km, respectively. Those missiles can reach Emirati and Saudi targets, as well as US bases.

Tensions in the region have been rising for months after President Donald Trump pulled America out of Iran's nuclear deal with world powers in May. The United Nations says Iran still honors terms of the accord, which saw it limit its enrichment of uranium in exchange for the lifting of economic sanctions.

This is the third time in about a year that Iran has fired its ballistic missiles in anger.

Last year, Iran fired ballistic missiles into Syria over a bloody IS attack on Tehran targeting parliament and the shrine of Ayatollah Ruhollah Khomeini. In September, Iran fired missiles into Iraq targeting a base of an Iranian Kurdish separatist group. The separatists say that strike killed at least 15 people and wounded over 50.