Indian sworn in as US citizen at Trump event

Even though he praised the new citizens, the President has long sought to reduce legal immigration into the US 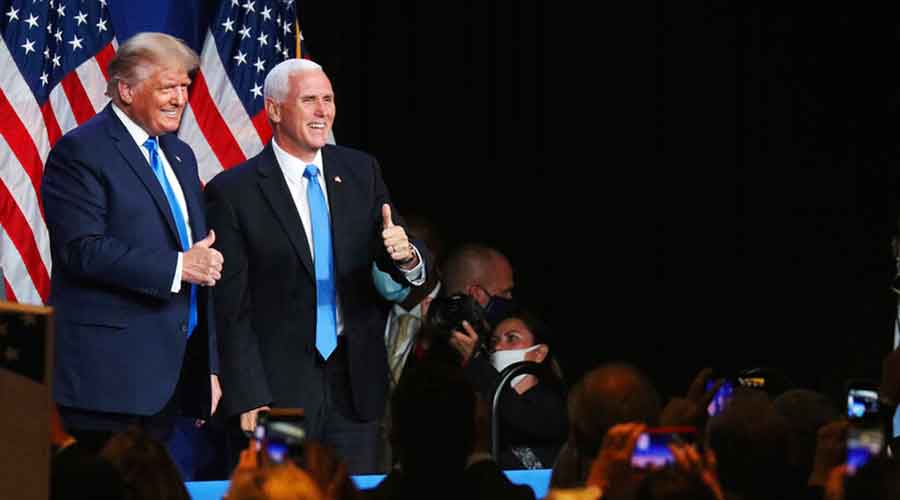 President Donald Trump and Vice President Mike Pence give a thumbs up after speaking during the first day of the Republican National Convention Monday, August 24, 2020,
AP
Michael D. Shear   |   Washington   |   Published 27.08.20, 03:38 AM

President Trump sought on Tuesday to wrap himself in pro-immigrant sentiment — even though his administration has waged a years-long assault on the nation’s immigration system — by presiding over a naturalisation ceremony where five immigrants, including a software developer from India, were sworn in as American citizens.

The US leader welcomed the immigrants to the “magnificent nation” that is comprised of every race, religion and colour.

Using the majesty of the White House for blatantly political purposes, Trump appeared during the convention’s second hour as Hail to the Chief played and strode to a lectern where five immigrants were waiting to take the oath to become citizens.

“Today, America rejoices as we welcome five absolutely incredible new members into our great American family,” he told them in a 10-minute ceremony that had been taped in the afternoon.

With their right hand raised and a US flag in their left hand, they were administered the Oath of Allegiance by the acting US secretary of homeland security Chad Wolf, as Trump looked on. Sudha Sundari Narayanan, a software developer from India, was among those sworn in as American citizens.

It was not the first time Trump has presided over such a ceremony. But the willingness to use the trappings of presidential power during a campaign convention was a stunning departure from the past, in which prior Presidents have avoided seeming to blur the lines between official actions and political activity.

On Tuesday night, the decision to preside over the naturalisation ceremony appeared to be intended to soften his attacks on immigration for particular groups of voters: suburbanites, people of colour and women who might be put off by his usually strident talk.

After listening to the five immigrants take the oath required to become citizens,  Trump approached the lectern to briefly share each of their stories. “Congratulations,” he said. “That’s fantastic. That’s really great.”

But the strongly anti-immigrant message that he has long delivered to his most fervent supporters is not likely to change anytime soon.

Even though he praised the new citizens, Trump has long sought to reduce legal immigration into the US and has recently moved to shrink or eliminate visa programmes that allow companies to hire foreigners to work in the US.

Aides to the President brag about the reductions in overall immigration, saying the efforts are helping protect Americans from having to compete with immigrants for jobs.

Just last week, during a briefing from border officials in Yuma, Arizona, the President had similar praise for a very different achievement.