Modi during a bilateral meeting with Putin underlined the importance of 'democracy, dialogue and diplomacy' 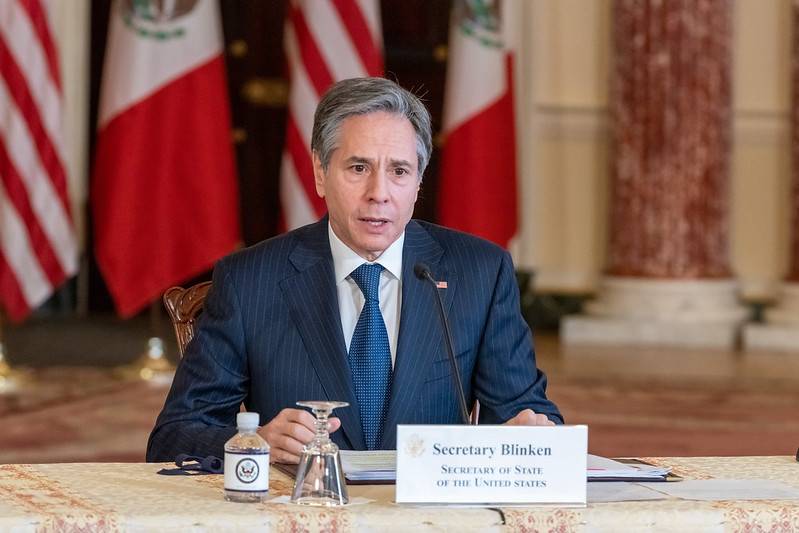 Indian and Chinese leaders expressing their concerns to the Russian President over the Ukraine war is reflective of the global worries about the effects of Moscow's aggression against the interests of people across the planet, US Secretary of State Antony Blinken has said.

Prime Minister Narendra Modi during a bilateral meeting with Russian President Vladimir Putin on Friday on the sidelines of the annual summit of the Shanghai Cooperation Organisation (SCO) in Uzbekistan pressed him to end the conflict in Ukraine soon, saying "today's era is not of war".

It was the first in-person meeting between the two leaders after the Ukraine conflict began in February.

Modi also underlined the importance of "democracy, dialogue and diplomacy" while calling for an early cessation of hostilities in Ukraine.

The Ukraine issue was also figured out during Putin's meeting with Chinese President Xi Jinping. Putin has told Xi Jinping that he understands China's questions and concerns about the war in Ukraine.

"What you're hearing from China, from India, is reflective of concerns around the world about the effects of Russia's aggression on Ukraine not just on the people of Ukraine, devastating as that's been, but on countries and people across the entire planet, Blinken told reporters on Friday at a joint media availability with the Jordanian Foreign Minister Ayman Safadi.

Blinken was responding to a question on leaders of China and India expressing their concern about the war in Ukraine directly to Vladimir Putin.

Do you see this as a significant shift for Russia on the international stage? he was asked.

Blinken argued that the United Nations Charter should be front and centre.

The number one violator of the charter right now is Russia. So there are real concerns that, I think, are being heard from countries around the world about that, and, of course, all of the impacts that this is having, including, for example, on food insecurity, he said.

We've spent a lot of time and a lot of focus in recent months in trying to address the challenges to food security that have been exacerbated dramatically by Russia's aggression. We already had Covid, we already had climate change that was having profound effects on food insecurity. Add to that conflict, we now have well over 200 million people who are severely food insecure, Blinken said.

"This is something that leaders in countries around the world are feeling because their people are feeling it. And so I think what you're seeing is just a manifestation of the fact that this aggression has been an aggression against the interests of people across the planet, and I think it increases the pressure on Russia to end the aggression, Blinken said.

Meanwhile, the mainstream American media on Friday also praised Prime Minister Modi for telling Russian President Putin that this is not the time for war in Ukraine.

The Modi-Putin conversation in the Uzbek city of Samarkand was widely carried by the mainstream American media.

"Today the biggest worry before the world, especially developing countries, is food security, fuel security, fertilisers. We must find ways on these problems and you will also have to consider it. We will get an opportunity to talk about these issues," Modi said in his opening remarks.

"I know today's era is not of war. We discussed this issue with you on phone several times, that democracy, diplomacy and dialogue touch the entire world. We will have the opportunity to talk today about how we can move forward on the road of peace in the coming days," Modi said.

In a statement, the Ministry of External Affairs said the prime minister reiterated his call for an early cessation of hostilities and the need for dialogue and diplomacy in the context of the ongoing conflict in Ukraine.

"Modi rebukes Putin over war in Ukraine, The Washington Post reported in a headline. In a stunning public rebuke, Modi told Putin: Today's era is not an era of war, and I have spoken to you on the phone about this," the daily reported.

"The rare reproach showed the 69-year-old Russian strongman coming under extraordinary pressure from all sides, the Post said.

On his part, Putin told Modi that he was aware of India's concerns over the Ukraine conflict and that Russia will do everything possible to end it as soon as possible.

"I know about your position on the conflict in Ukraine. I know about your concerns. I know that you share these concerns and we all want an end to all of these as soon as possible," Putin said in his televised opening remarks at the meeting.

The Russian President said Ukraine has refused to engage in the negotiation process and it wants to achieve its "objectives on the battlefield militarily."

"We will keep you abreast of everything that is happening over there," Putin conveyed to Modi.

The meeting between Modi and Putin was the lead story on the webpage of both The Washington Post and The New York Times.

"India's Leader Tells Putin That Now Is Not an Era for War, The New York Times said in its headline.

The tone of the meeting was friendly, with both leaders referring to their long shared history. Before Mr Modi made his comments, Mr Putin said he understood India's concerns about the war in Ukraine, the daily said.

"Mr. Modi's comments came a day after President Xi Jinping of China -- in his first face-to-face meeting with Mr Putin since the invasion began -- struck a far more subdued tone than the Russian president, and steered clear in his public comments of any mention of Ukraine, reported the New York Times.

War can get more serious: Putin