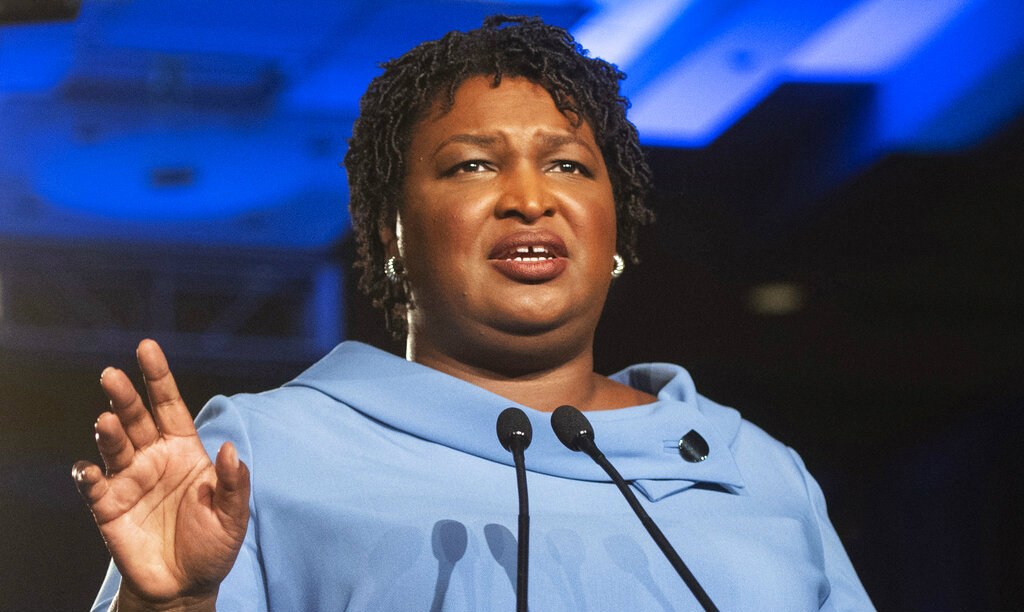 Georgia Democrat Stacey Abrams stepped onto the biggest stage of her political career to deliver her party's rebuttal to Trump's State of the Union address.
AP file picture
AP   |   Washington   |   Published 06.02.19, 09:43 AM

Stacey Abrams harnessed the frustration of Democrats on Tuesday with a sharp rebuke of President Donald Trump for abandoning working Americans and fomenting partisan and cultural discord.

Just months after narrowly losing her bid to become America's first black woman governor, the Georgia Democrat stepped onto the biggest stage of her political career to deliver her party's rebuttal to Trump's State of the Union address. She was the first black woman to deliver such an address and used the high-wattage event to blister Trump on everything from education and school safety to being out of touch with the middle class.

But she was especially stinging when it came to Trump's role in the 35-day partial government shutdown over his demands for a wall at the US-Mexico border.

'The shutdown was a stunt engineered by the President of the United States, one that defied every tenet of fairness and abandoned not just our people, but our values,' Abrams said.

Her speech was much shorter than the President's hour-plus address. And she largely avoided the pitfalls of others who delivered similar responses, including Florida Sen.

Marco Rubio, who broke from his script in 2013 to swig sips of water, and Democratic Rep. Joe Kennedy III, who was ridiculed for his overuse of ChapStick in 2018.

Still, a union hall in Atlanta doesn't compare to the grandeur — and bright lights — of the House chamber, where Trump delivered his speech.


The shutdown was a stunt engineered by the President of the United States, one that defied every tenet of fairness and abandoned not just our people, but our values.
- Stacey Abrams


In choosing Abrams to deliver the Democratic response to Trump, party leaders acknowledged the power and influence of women — especially black women — in anchoring the Democratic base. Senate Minority Leader Chuck Schumer is trying to persuade Abrams, 45, to run for Senate in 2020, sensing the opportunity to flip a Republican-held seat and bolster turnout in Georgia, which could become a presidential battleground.

Some potential 2020 Democratic presidential contenders were quick to praise her performance.

'Stacey Abrams achieved in a matter of minutes something Donald Trump failed to do in over an hour — to embrace and give voice to the spirit and core values that make America great,' former Vice-President Joe Biden tweeted.

Vermont Sen. Bernie Sanders said, 'I think all know why she would have been a wonderful governor of Georgia.'

In her speech, the Yale-educated attorney traced her personal story to her parents, who were raised in segregated Jim Crow Mississippi. She recalled how her family and neighbors overcame adversity by relying on each other and valuing education.

'These were our family values: faith, service, education and responsibility,' she said, crediting her parents, both of them United Methodist ministers, for teaching her about 'this uncommon grace of community.'

'We do not succeed alone,' she added. 'In these United States, when times are tough, we can persevere because our friends and neighbours will come for us.'

Abrams' audience at the union hall included workers, activists, labour leaders, health care professionals, educators, entrepreneurs and voters who her aides say had trouble casting their ballots in 2018. Abrams abandoned her governor's race without a formal concession, asserting that her opponent, Brian Kemp used his last post as secretary of state to make it harder for people, particularly minorities and the poor, to cast ballots. Kemp defended his job performance, but Abrams has still emerged as a leading voting-rights advocate nationally.

'Let's be clear: voter suppression is real,' she said Tuesday, arguing that the issue must be solved before government will be capable of addressing matters from climate change to expanding healthcare access.

'This is the next battle for our democracy, one where all eligible citizens can have their say about the vision we want for our country,' Abrams said. 'The foundation of our moral leadership around the globe is free and fair elections, where voters pick their leaders - not where politicians pick their voters.'


Stacey Abrams achieved in a matter of minutes something Donald Trump failed to do in over an hour — to embrace and give voice to the spirit and core values that make America great.
- Joe Biden


As she did running for governor, Abrams spoke candidly about her personal debts, which Republicans have used as an attack. Abrams often said her student loans and other debts amassed caring for family members left her more empathetic than most politicians to what the majority of US households experience in day-to-day life. 'My family understood firsthand that while success is not guaranteed, we live in a nation where opportunity is possible,' she said.

Republicans are not sparing Abrams, with the Republican National Committee lambasting what it calls 'extreme policies' that were 'rejected by her home state of Georgia last November.' Trump resisted any shots at Abrams leading up to their prime-time juxtaposition. But last fall, as he advocated for Kemp, the president called Abrams 'unqualified' for statewide office.

Even as she critiqued Trump, she said she wasn't rooting for his failure.

'I'm disappointed by the President's approach to our problems,' she said. 'I still don't want him to fail. But we need him to tell the truth, and to respect his duties and the extraordinary diversity that defines America.'