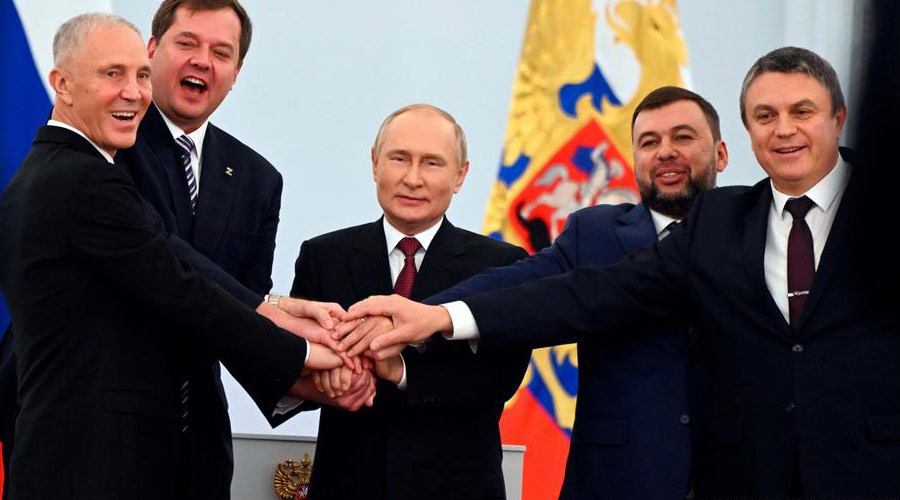 It was never going to take long for condemnations of Russia's freshly announced annexation of four Ukrainian territories to come rolling in on Friday. Ukraine's closest backers had already made their views clear.

The European Union was quick off the mark, releasing a joint statement while Russian President Vladimir Putin's address was still ongoing. "We do not and will never recognize the illegal 'referenda' that Russia has engineered as a pretext for this further violation of Ukraine's independence, sovereignty and territorial integrity, nor their falsified and illegal results," the 27 countries wrote in a joint statement.

Speaking to reporters in Brussels, NATO Secretary-General Jens Stoltenberg said it was an illegal and illegitimate "land grab".

"This is the largest attempted annexation of European territory by force since World War Two," Stoltenberg said.

The bloc also eluded to its next planned package of sanctions, still under construction, vowing to "strengthen our restrictive measures countering Russia's illegal actions.”

The new punitive measures could include further import bans on Russian products, export bans on key technology used for the military, a legal basis for an oil price cap and a ban on EU citizens from sitting on governing bodies of Russian state-owned companies.

The United States promptly announced fresh sanctions on Friday. President Joe Biden said in a statement that together with allies, Washington would punish "individuals and entities” supporting "illegal attempts" to redraw Ukrainian borders. "Make no mistake: these actions have no legitimacy," Biden said.

The United Kingdom also unveiled snap measures. Moscow will lose access to services like IT consultancy, architecture and engineering, according to a statement from the UK's Foreign Office. London would also ban the export of hundreds of goods "crucial to Russia's industrial and technological capabilities," the statement continued.

From outside Europe, Japanese prime Minister Fumio Kushida said Tokyo "strongly condemns Russia's 'incorporation' of the regions in Ukraine. It infringes upon Ukraine's sovereignty and territorial integrity, constitutes a violation of international law, and shall never be recognized.”

Leading officials from the Organization for Security Cooperation in Europe (OSCE), an intergovernmental security organization of 57 states including Russia, also condemned the illegal annexation of sovereign Ukrainian territory. "The step announced today is a blatant violation of the fundamental rules of international law, OSCE principles, and the UN Charter," the statement, signed by Chairman-in-Office, Polish Foreign Minister Zbigniew Rau, among others, read.

In a way, Ukraine's President Volodymyr Zelenskyy offered his own reaction to Putin: Announcing that Kyiv would apply for NATO membership using an accelerated procedure"De facto, we have already completed our path to NATO," he said in a statement. "Today, Ukraine is applying to make it de jure."

While NATO countries have been arming Ukrainian forces heavily, Kyiv's desire to imminently join the alliance may prove difficult when it comes to getting the necessary backing from all 30 members.

NATO allies are bound to come to each other's defense in the case of an external attack, so Ukraine joining the ranks could lead to a major NATO-Russia escalation.