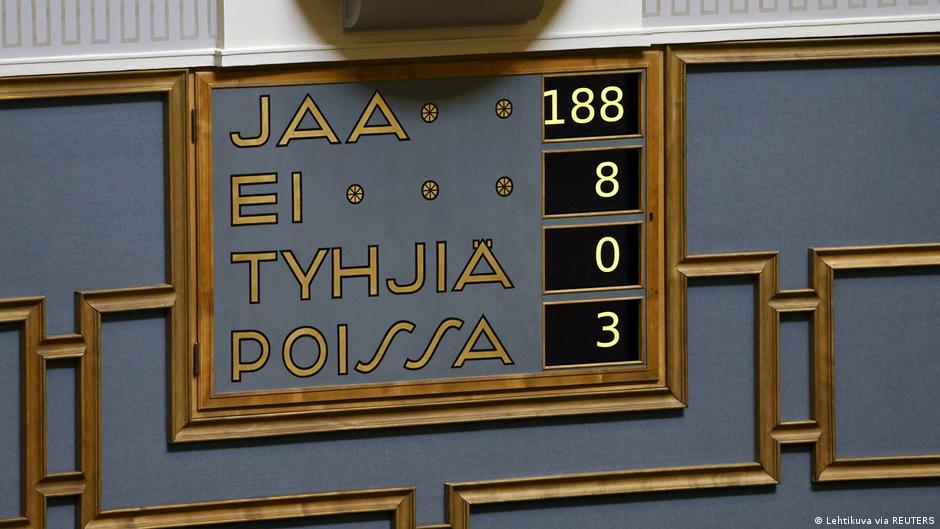 Finland has overwhelmingly approved a proposal to join NATO after a parliamentary debate. Fewer than 10 lawmakers opposed the proposal.
Finland's legislature on Tuesday approved the country's bid for NATO membership with 188 votes in favor and eight against, Parliament Speaker Matti Vanhanen said.

The vote comes after two days of parliamentary debate, during which the foreign affairs committee said that "Russia's long-standing aggressive policies and the goal of dividing Europe into new spheres of influence took on a new dimension after the country's invasion of Ukraine."

"Failure to respond would lead to a narrowing of Finland's foreign, security and defense policy," it added.

The vote in Parliament was seen a formality, as Finnish President Sauli Niinisto and Prime Minister Sanna Marin had already announcedthat Finland would go ahead and that minimal opposition was expected.

"Our security environment has fundamentally changed," Prime Minister Marin told parliament on Monday at the start of the debate.

What happens next?
The vote clears the way for a Finnish application for membership in the Western defense alliance. President Niinisto will now have to sign the application and hand it in to NATO's headquarters in Brussels.

Finland and Sweden have said they intend to submit their applications in unison, as the Swedish government voted yesterday to apply for NATO membership. Sweden's Foreign Minister Ann Linde had already signed her country's application on Tuesday morning.

The White House said Tuesday that US President Joe Biden would host the Finnish and Swedish leaders in Washington Thursday to discuss "NATO applications and European security, as well as strengthening our close partnerships across a range of global issues and support for Ukraine.

German Chancellor Olaf Scholz has said Germany will increase military cooperation with Sweden and Finland during the application process.

"We will intensify our military cooperation especially in the Baltic Sea region and through joint exercises," Scholz said amid concern for the two countries' security during the transition period, amid Russian ire at their NATO ambitions.

NATO Deputy Secretary-General Mircea Geoana told DW on Sunday that the alliance would do its best to make sure that Finland and Sweden will have an expedited application process.

There have been concerns over member state Turkey withholding approval of what Ankara considers to be Swedish and Finnish support for Kurdish political parties labeled as "terrorist" organizations.

Finnish and Swedish diplomats plan to travelto Ankara this week to talk to representatives of the Turkish Foreign Ministry.

Both NATO Secretary General Jens Stoletenberg and US President Biden have said they are confident differences with Turkey can be overcome, although questions remain as to what conditions Turkey could attach on greenlighting Swedish and Finnish NATO membership.

What does NATO membership mean for Finland?
Finland joining NATO would be the biggest security policy shift for the country since after World War II, after which the country adopted a policy of military nonalignment and neutrality.

Finland shares a 1,300-kilometer (800-mile) long border with Russia, and Moscow has strongly opposed its membership in NATO.

Neutral Finland was invaded by the Soviet Union in 1939 and fought two wars against it during the course of World War II. It ultimately lost large chunks of the eastern Karelia province to the Soviet Union and had to pay reparations.