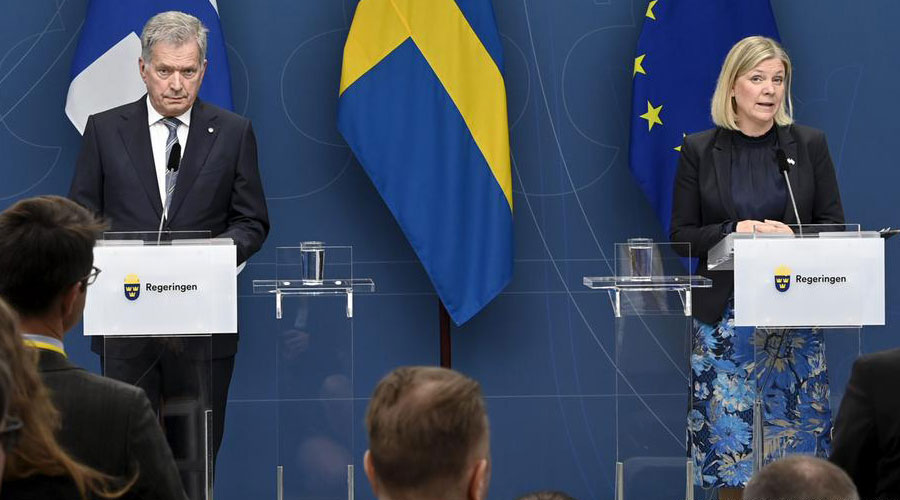 Two new prospective members of the 73-year-old NATO alliance have submitted their applications to join. Their bids, which come in light of Russia's aggression in Ukraine, have already faced resistance from Turkey.

Finland and Sweden submitted their bids to join NATO on Wednesday, despite Turkey's threat to block the addition of the Nordic nations.

Finland — which shares a 1,300-kilometer (800-mile) border with Russia — and its neighbor Sweden have been disturbed by Moscow's invasion of Ukraine.

"I warmly welcome the requests by Finland and Sweden to join NATO. You are our closest partners," NATO chief Jens Stoltenberg told reporters after receiving the bids.

What does the bid mean?

The two countries' applications to join the alliance as a defense against feared aggression from Russia would end decades of military neutrality.

The accession protocols for both nations could be signed as early as June, to be followed by ratification procedures in member states. Finland and Sweden could become NATO members by the end of the year. The process usually takes up to a year.

"I'm happy we have taken the same path and we can do it together," Swedish Prime Minister Magdalena Andersson said Tuesday during a joint press conference with Finnish President Sauli Niinisto.

Russian President Vladimir Putin on Monday warned that the expansion of NATO might trigger a response.

On Monday, Putin said that while Finland and Sweden joining NATO posed "no direct threat" to Russia, the "expansion of military infrastructure to these territories will certainly provoke our response."

However, the main obstacle to Finland and Sweden's membership comes from within the alliance.

Turkey claims that both Sweden and Finland have provided a refuge for Kurdish groups it labels "terrorists," and Turkish President Recep Tayyip Erdogan insists Ankara will not approve the expansion.

Any bid to join NATO must be agreed upon by all 30 members of the alliance.

Several other alliance members have already pledged to support a fast-track application process. Canada said it expected to ratify the bid of the two prospective members in just a few days.

Why have Finland and Sweden asked to join NATO?

Historically both countries maintained a form of diplomatic neutrality between NATO and the then-Soviet Union.

As democracies with well-funded militaries, they ended up as NATO's closest partners, but there was little public support for joining the alliance.

Since Russia's invasion of Ukraine, however, public opinion has changed course, reaching around 60% in favor of NATO in Sweden and 75% in Finland. This led the ruling Social Democratic parties in both countries, traditionally wary of NATO, to lead the charge in launching the bid.

Due to Finland's 1,300-kilometer border with Russia, its accession to NATO would vastly expand the proximity of NATO and Russian territory.