Islamabad retains right to use ‘anything and everything’ in its defence 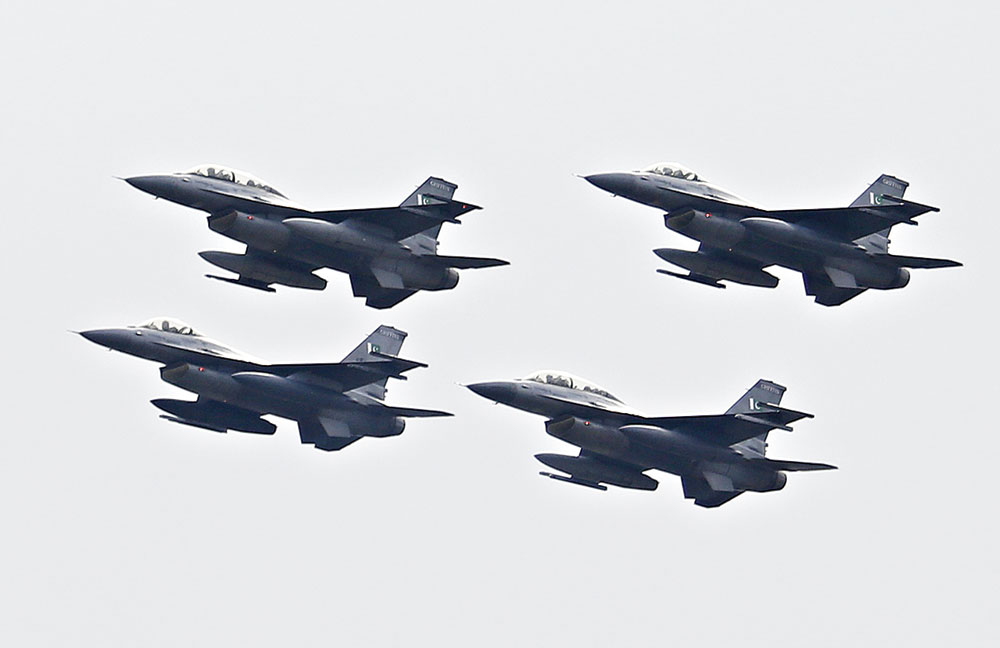 Pakistan on Monday, for the first time, indicated that F-16s may have been used to hit Indian fighter jets on February 27 and said that Islamabad retains the right to use “anything and everything” in its defence.

Pakistan’s military spokesman Maj. Gen. Asif Ghafoor in his statement referred to what he said was “repeated Indian claims” about shooting down of a Pakistani F-16 by India and the use of an F-16 in the air battle on February 27.

“As regards Pakistan Air Force action for strikes across the Line of Control, it was done by the JF-17 from within Pakistan airspace,” he said.

Later, when two Indian jets crossed the Line of Control, they were shot down by the PAF jets, he claimed.

“Whether it was F-16 or JF-17 which shot down 2 Indian aircraft is immaterial,” he said.

He further said: “Even if F-16 has been used at that point in time, complete PAF was airborne including F16s, the fact remains that Pakistan Air Force shot down two Indian jets in self-defence.”

Ghafoor said that Pakistan had the right to use anything for its defence. “India can assume any type of their choice even F-16. Pakistan retains the right to use anything and everything in its legitimate self-defence,” he said. He also rejected the claim that an F-16 aircraft was destroyed by the Indian Air Force in the dogfight. “The event of February 27 is part of history now. No Pakistani F-16 was hit by Indian Air Force,” he said.

Last month, Ghafoor said that only JF-17 was used against India on February 27.

Tensions between India and Pakistan escalated after the February 14 attack by the Pakistan-based Jaish-e-Mohammed group in Pulwama that killed 40 CRPF soldiers.

Amid mounting outrage, the Indian Air Force carried out a counter-terror operation, hitting what it said was a JeM training camp in Balakot, deep inside Pakistan on February 26.

The following day, Pakistan Air Force retaliated and downed a MiG-21 in aerial combat and captured an Indian pilot, who was handed over to India later.

Delhi has given proof to America about the use of US-manufactured F-16 jets and AMRAAM beyond visual range air-to-air missile by the Pakistan Air Force during its aerial raid on February 27.

As part of the purchasing agreement, the US had reportedly barred Pakistan from using the F-16s against any third country and it was only allowed to operate the fighter in self-defence and for anti-terror missions.

The IAF on February 28 displayed parts of an AMRAAM missile as evidence to “conclusively” prove that Pakistan deployed F-16s during the aerial raid targeting Indian military installations in Kashmir. It said Pakistan does not have any other fighters capable of firing an AMRAAM missile other than an F-16.

A five-year-old girl and a BSF inspector were killed and a dozen more were injured in renewed Pakistani shelling in Jammu, triggering fierce retaliatory fire from the Indian side, said, officials.

They added that Pakistan mortars pounded Indian positions at multiple places along the Line of Control in the Poonch district of Jammu, injuring more than a dozen persons, including six jawans.

A shell exploded near the home of the five-year-old girl, Sobia, in Shahpur sub-sector, killing her and leaving two other relatives injured.

Pakistan is using heavy weapons, including 120mm mortars, to target Indian positions and the firing was continuing till late in the evening, officials said. Pakistan targeted both security installations and civilian areas in Krishnagati, Mangote, Kerni, Gulpur, Shahpur and some other sub-sectors in Poonch.

The ceasefire violations by Pakistan are routine in Jammu districts, but the violations have taken place for the fourth day in a row. Several shells have landed in villages like Shahpur, Mankotr and Kerni, forcing residents to restrict their movement.