Air vice-marshal says pilot's return according to the Geneva Convention 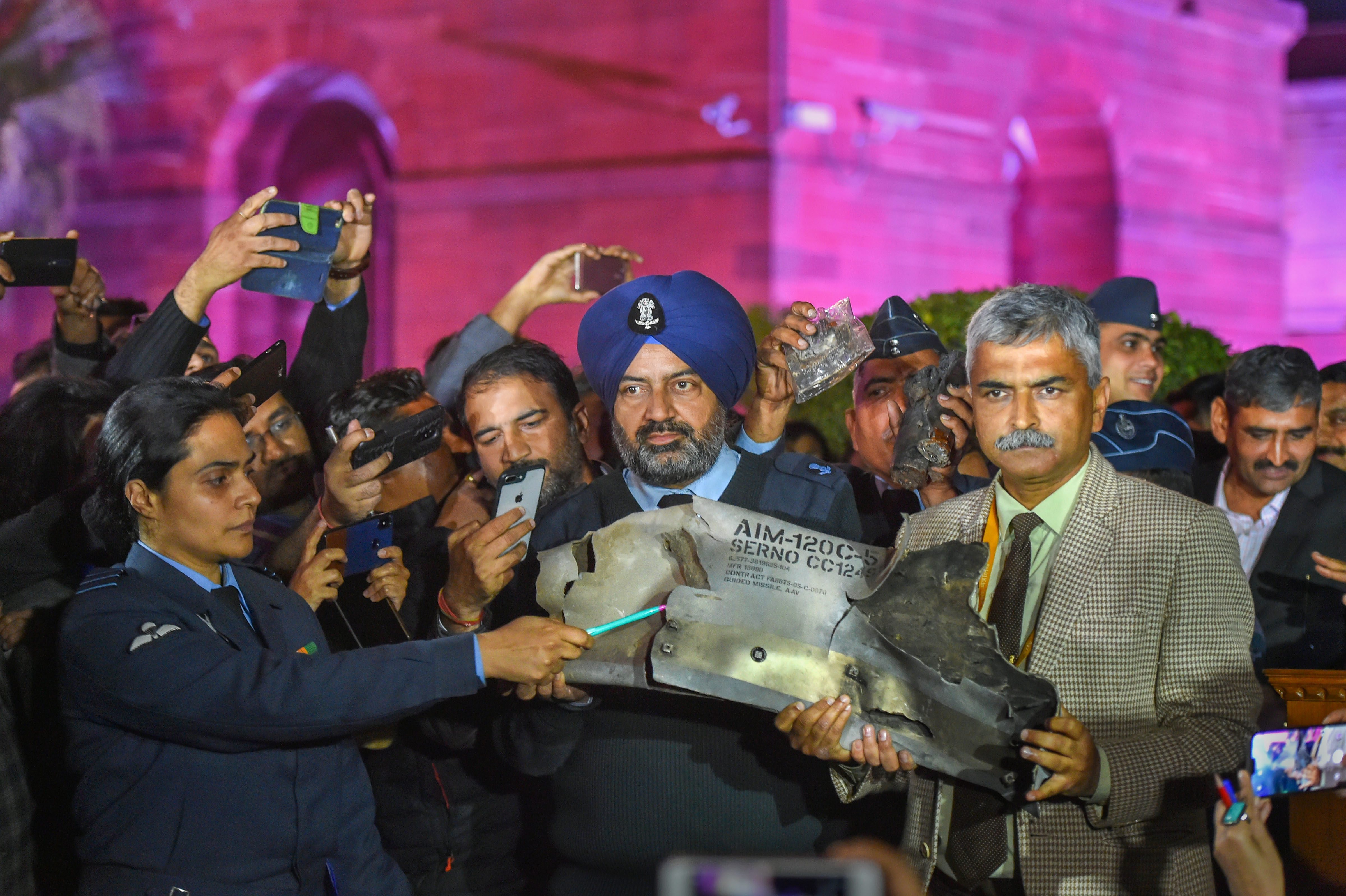 A senior air force officer on Thursday evening said Pakistan had sent F-16 fighter jets to attack Indian military installations on Wednesday but did not give the number of aircraft.

Three key points came out from the news conference held by three military officers. One, that India had proof that Pakistan had used F-16s during the February 27 incursion. Second, the air force was not ready to give details on the magnitude of damage, if any, that India had inflicted in Balakot. Third, the air force did not give the number of Pakistani jets that entered or tried to enter Indian airspace.

One TV channel as claimed 24 jets had tried to cross into Indian airspace and eight Indian jets chased them back. There were also reports earlier that India had sent in 12 jets on February 26.

One of the objectives of the defence officers' news conference was to debunk Pakistan's claim that it had targeted uninhabited areas in a bid to show strength, not to cause damage. The air force and the army officers said that multiple defence installations were targeted on February 27.

This was the first time defence officers spoke on the operations of February 26 and 27. Yesterday, when MEA spokesperson Raveesh Kumar held a news conference, Vice-Marshal R.G.K. Kapoor sat beside him and then left.

Today, after Vice-Marshal Kapoor,  Major General Surinder Singh Bahal of the army and Rear Admiral D.S. Gujral of the navy faced journalists at 7pm, IAF officers held up portions of metal with labels as 'evidence' of an F-16 strike on February 27. The mangled metal, according to the IAF, were portions of an advance medium-range air-to-air missile (AMRAAM). Vice-Marshal Kapoor said the missile was 'appropriate for carrying only on the Pakistan F-16' and these portions 'were recovered east of Rajouri'.

Pakistan had admitted to sending fighter planes across the LoC, but had denied F-16s were used.

Giving details of the February 27 air incursion by Pakistan, Vice-Marshal Kapoor said at 1000 hours, Indian radars 'detected a large package of Pakistan air force aircraft heading towards Indian territory'. The aircraft formation 'breached the Indian airspace west of Rajouri'. He said the ingressing aircarft were 'observed to be at various levels' and other than F-16, JF-17 aircraft were used by Pakistan.

Explaining India's counter-attack, Kapoor said IAF fighters, 'including MiG-21 Bison, Sukhoi 30 MKI and Mirage 2000 were tasked to intercept the intruding Pakistan air force aircraft'. The Pakistan aircraft 'attempting to target our military installations were intercepted' and some payload fell on Indian Army installation compounds. Pakistan was 'unable to cause any damage', he said. In the aerial combat that followed the incursion, one F-16 of Pakistan was shot down by an IAF MiG-21 Bison.

One journalist asked the vice-marshal about the Balakot casualty figures of February 26.

On the day of the Balakot airstrike, the government had said many terrorists and leaders of the Jaish-e-Mohammad were killed. Kapoor declined to give figures on casualties. 'There is fairly credible evidence with us which proves that there was damage to the camps. The weapons hit their intended targets,' he said.

The senior military officers did not say anything specific when asked if Pakistan's action on February 27 amounted to an act of war, probably because that prerogative lies with the civilian government.

The vice-marshal spoke about the 'factually incorrect statements' made by Pakistan - first, that two IAF aircraft were shot down by Pakistan and three pilots of the Indian Air Force were down. He said later in the day, Pakistan corrected its version and said that they had one pilot in custody. He said the force was happy to hear that Wing Commander Abhinandan Varthaman would be released by Pakistan.

When specifically asked by a journalist in what light the IAF saw the news of Wing Commander Abhinandan's release, he said that the force saw it as a move followed under the Geneva Convention.