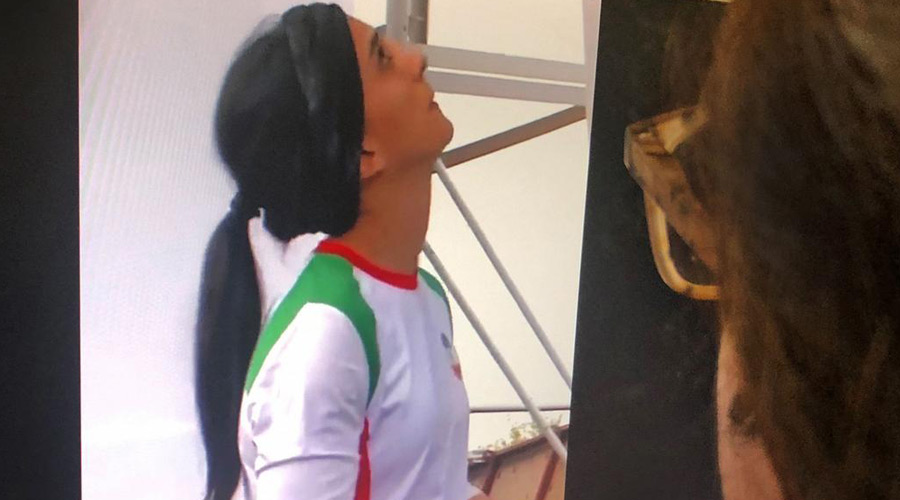 Iranian competitive climber Elnaz Rekabi, who was believed to have gone missing, arrived back in Tehran on Wednesday, according to several media reports.

Large crowds of supporters gathered at the Imam Khomeini International Airport outside of Tehran on Wednesday morning to welcome her back to Iran.

"Elnaz is a hero," they chanted, clapping their hands.

After receiving flowers from a passerby, Rekabi reiterated what she had said on Instagram earlier — that competing without a hijab had been "completely unintentional." She added that her journey back to Iran had been as scheduled.

Elnaz Rekabi has been hailed as a
Deutsche Welle

Competing without a hijab

The 33-year-old athlete took part in the Asian Sport Climbing Championships in South Korea on Sunday, where she did not wear Iran's mandatory headscarf.

The Islamic republic's strict dress code requires a compulsory headscarf for women, which also apply to all female athletes, including while participating overseas.

As the move was seen as a gesture of solidarity with the women-led protests at home, there has been significant worry for her well-being.

The country has been roiled by protests initially sparked by the death of 22-year-old Jina Mahsa Amini, who died after being arrested by Iranian morality police for allegedly breaching the country's strict rules on head coverings.

Hailed as a 'hero'

According to a stream provided by the International Federation of Sport Climbing (IFSC), Rekabi wore a bandana over her head during the first discipline of bouldering but switched to only a headband for the next event.

Elnaz Rekabi has been hailed as a "hero" by supporters on social media, who posted images of her with the protest slogan "Woman. Life. Freedom."

She later expressed regret for causing "concerns" in a post on Instagram. She insisted that her appearance without a hijab was "unintentional."

"I firstly apologize for all the concerns I have caused," the statement said. It added that due to the pressing schedule of the events "my hijab unintentionally became problematic."

"This has been done under duress," Shiraghaei said.

Maral Karimi, author of a book on the Iranian Green Movement, pointed out that "the authorities have also summoned and arrested her brother, which can only be translated as hostage taking," which Karimi told DW was to force Rekabi to return to Iran.

Meanwhile, the protests in Iran entered their fifth week. More than 100 people, including children, have reportedly been killed in the protests that began last month, according to rights groups.

These demonstrations have been one of the strongest challenges to Iran's religious leaders since the 1979 revolution, with protesters demanding the downfall of the Islamic Republic.