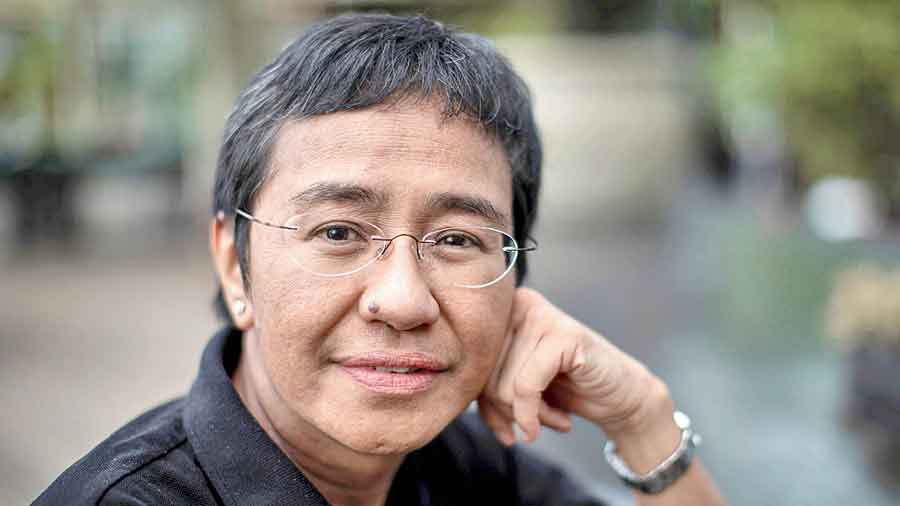 Philippine President Rodrigo Duterte’s administration belatedly congratulated journalist Maria Ressa Monday for being one of two winners of this year’s Nobel Peace Prize in recognition of her fight for freedom of expression under grave risks.

However, it rejected criticisms that it was a slap on Duterte’s leadership, despite Ressa being a critic of the president's leadership, which critics say veers toward authoritarianism.

Presidential spokesman Harry Roque said Ressa, the 58-year-old co-founder of the Rappler news website known for its probing reportage into Duterte’s bloody anti-drugs crackdown, has been convicted of cyber libel and faces other criminal charges which courts would independently decide on.

Journalists were not being muzzled in the country, he said. It was the first time the Duterte administration has publicly reacted to Ressa’s victory since she won the award on Friday.

“There is no slap there because as everyone knows, no one has ever been censored in the Philippines,” Roque said in reply to a reporter’s question at a televised news conference.

Roque sought to back up his statement by citing a Filipino National Artist awardee, Francisco Sionil Jose, who said in a statement that Ressa did not deserve the award and that “the Philippine press is alive and well not because of” her and added that there were no writers in jail nor did censorship exist in the country.

Duterte has not shut down any newspaper or radio station, Jose said, while adding that, even though the President exerted influence on Congress, which did not renew the licence of leading TV network ABS-CBN, leading to its closure last year, that was not a press freedom issue.

Jose conceded that journalists have been killed after attacking local politicians and officials under Duterte —  similar to what had happened under his predecessors. However, “those killings cannot be laid at Duterte’s door”, said the 96-year-old multi-awarded novelist, whose comments drew criticism and ridicule.

Despite that, Roque said the presidential palace agreed with his views. The Norwegian Nobel Committee noted that Ressa’s Rappler news site which was set up in 2012 has put a spotlight on Duterte’s “controversial, murderous anti-drug campaign” in the Philippines. Other domestic and international news agencies have also closely reported on the brutal campaign, which Duterte launched when he took office in 2016 and which has left more than 6,000 mostly poor suspects dead.

Western governments and human rights groups have repeatedly expressed concerns about the level of brutality and lack of due process.      The committee also cited the work of Ressa and Rappler in documenting “how social media is being used to spread fake news, harass opponents and manipulate public discourse.”

Ressa won the award with Dmitry Muratov of Russia, a co-founder of the independent Russian newspaper Novaya Gazeta, which the Nobel committee called “the most independent newspaper in Russia today, with a fundamentally critical attitude towards power.”

Six of its journalists have been killed since its founding in 1993, the committee said.

Ressa was convicted last year of libel and sentenced to up to six years in jail in a decision which media watchdogs called a major blow to press freedom in an Asian bastion of democracy.

The Manila court found Ressa and a former Rappler reporter, Reynaldo Santos Jr., guilty of libelling a wealthy businessman, who was linked to a murder, drug dealing, human trafficking and smuggling in a story that cited an intelligence report.

The businessman denied the allegations and complained that Rappler did not publish his side of the story. The news site's lawyers disputed any malice and said the statute of limitations for filing the libel complaint had passed.

Ressa and Santos appealed the convictions.

“The Philippine government filed 10 arrest warrants against me. In the last year, the government has prevented my travel four times, including when my mother was diagnosed with cancer and I needed to go to see my aging parents,” Ressa said in a Zoom interview after she won the Nobel Prize Friday.

Duterte and other Philippine officials have said the criminal complaints against Ressa and Rappler were not a press freedom issue but a part of normal judicial procedures arising from their alleged violations of the law.

Duterte has openly lambasted journalists and news sites who report critically about him, including the Philippine Daily Inquirer, a leading daily, and ABS-CBN, which was shut down by the government's telecommunications regulator after its 25-year license expired.

The shutdown has been criticised as it cut off a major source of information on the Covid-19 pandemic in a Southeast Asian hot spot of the disease.

The Philippines has remained one of the most dangerous countries in the world for journalists even after the 1986 downfall of dictator Ferdinand Marcos, who had muzzled the media, imprisoned journalists and opponents and tortured activists.

In 2009, 58 people were gunned down in the country's volatile south in a brazen assault sparked by an electoral rivalry between two powerful local political clans that horrified the world. Thirty-two of those gunned down were local reporters and media workers in the world's single worst recorded attack on journalists.