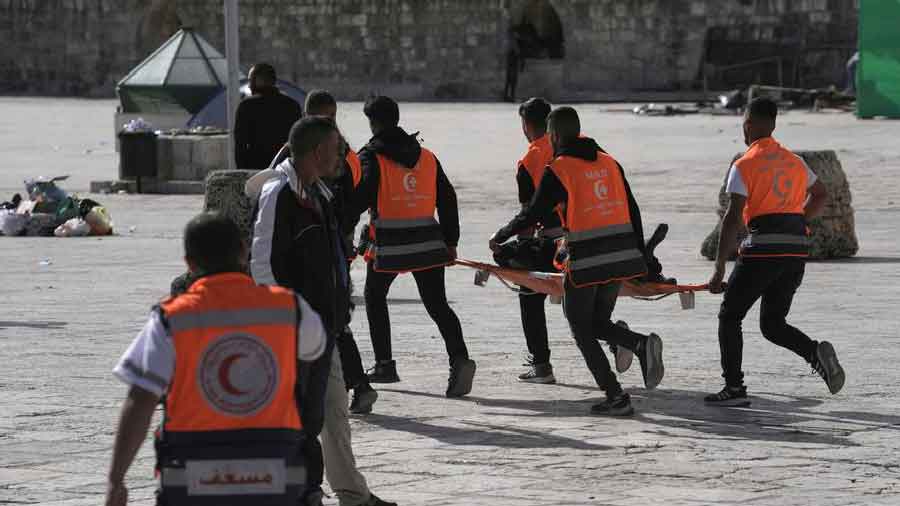 The Palestinian Red Crescent accused the police of beating one of their medics
Deutsche Welle
Deutsche Welle   |   Published 29.04.22, 04:04 PM

Over 40 people were injured in fresh clashes between Israeli police and Muslim worshipers at the Al-Aqsa compound, the Palestinian Red Crescent said on Friday. The humanitarian group added that 22 people sought hospital treatment, though none of them were seriously injured.

Israeli police said forces entered the compound and deployed "riot dispersal means" after people gathered at the mosque grounds began throwing stones and fireworks toward the nearby Western Wall. The wall is a Jewish holy site and a place of prayer.

Witnesses and reporters at the scene said police used tear gas and rubber-coated bullets to disperse the crowd. The clashes reportedly ended an hour later after other people in the compound convinced the stone throwers and the police to stand down Separately, the Palestinian Red Crescent accused the police of preventing first responders from entering the compound and beating one of its medics.

Three people have been arrested, including one person suspected of "inciting the mob," according to police. "For the past hour, the site has been quiet and (Muslim) worshipers are safely entering (the compound)" police said.

"We will continue to act decisively against rioters and outlaws for public safety and security.

Tensions remain high at the flashpoint site. With Ramadan drawing to a close, tens of thousands of Muslim worshipers are expected to gather at Al-Aqsa later on Friday. Multiple violent clashes have been reported at the site in recent weeks, prompting comparisons with similar clashes last year that fanned the escalation into a brief war between Israel and Hamas militants. Israeli officials accuse the Islamist group of trying to incite violence among Palestinian youths, while Hamas claims Israel is not doing enough to uphold the ban on Jews praying at the mosque grounds. Why do worshipers gather at the site?

Both Jews and Muslims have religious ties to the Jerusalem area known as Haram al-Sharif, or Temple Mount. For Jews, it is the location of the ancient temple built by the biblical King Solomon, as well as the so-called Second Temple built on the ruins of the more ancient building and eventually destroyed by the Romans in the first century AD.

For Muslims, the area is the home of the Al-Aqsa Mosque, the site from which Prophet Mohammed is believed to have ascended into heaven during the so-called Night Journey.