Trump threat to deploy army on US streets

President calls protesters terrorists, police use tear gas to clear a path for his walk to a church 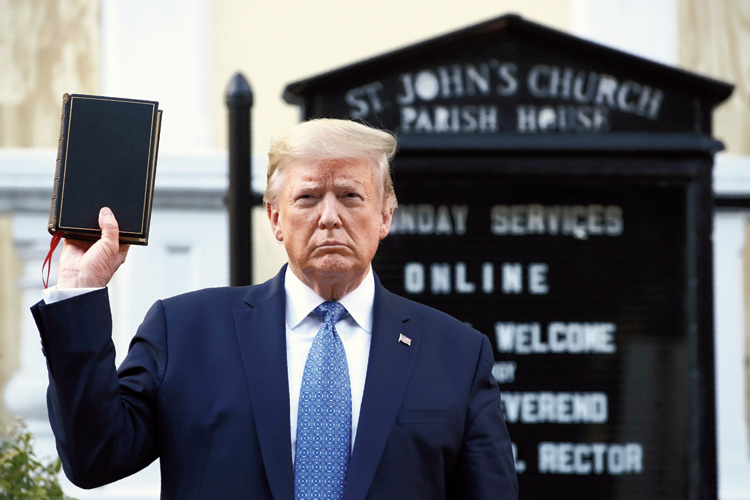 President Trump on Monday angrily denounced the demonstrators who have used violence to call attention to the deaths of black men killed by the police as “organisers” of terrorism, and threatened to send the American military to states where governors could not bring the protests under control.

“If a city or a state refuses to take the actions that are necessary to defend the life and property of their residents,” Trump said in brief remarks in the Rose Garden, “then I will deploy the United States military and quickly solve the problem for them”.

As the President began speaking, the police used tear gas and flash grenades to clear out the crowd that had gathered across the street in Lafayette Square so Trump could walk to St John’s Episcopal Church afterwards and pose for photographs while holding a Bible outside the boarded-up church.

St John’s, the so-called Church of the Presidents, had been briefly set ablaze as the protests devolved on Sunday evening. After Trump’s aides spent much of the day on Monday expressing outrage over the burning of a place of worship, one of his most trusted advisers, Hope Hicks, worked with others on ideas, eventually hatching a plan to have Trump walk over to the building, according to an official familiar with the plans.

Bishop Mariann E. Budde of the Episcopal Diocese of Washington said that she had not been told Trump would be making the trek.

“He did not pray,” she said. “We need a President who can unify and heal. He has done the opposite of that, and we are left to pick up the pieces.”

In his speech, Trump vowed to bring “law and order” to protests across the country that have sometimes led to looting and arson and reserved some of his harshest language for protesters in Washington, where demonstrations on Friday night forced his evacuation to a protected White House bunker. They continued with a growing intensity on Saturday night, and again on Sunday night, when St John’s briefly caught fire.

“What happened in this city last night was a total disgrace,” Trump said. “As we speak, I am dispatching thousands and thousands of heavily armed soldiers, military personnel and law enforcement officers to stop the rioting, looting, vandalism, assaults and the wanton destruction of property.”

The President blamed the destruction on the nation’s governors. “States have failed to take care of their citizens, like the young man in Dallas who was left dying on the street or the woman in upstate New York viciously attacked by thugs,” Trump said, recounting some of the violent episodes that angered him.

His remedy is a federal law that gives the President broad power to federalise states’ National Guard troops or to send in the military to restore order in a situation when rioting has left local authorities unable to enforce the law.

It is not always necessary for a governor to request that the federal government send in troops for domestic law enforcement purposes, legal specialists said. Some laws ultimately leave it up to the President to determine when such an intervention is necessary.

Trump told the army on Monday to deploy active-duty military police to Washington, a military official said, but the deployment may not be limited to those units. Washington is the one jurisdiction in the country where the army can do so without first consulting the governor of a state.

The deployment of the military police unit — a battalion of some 200 to 500 troops from Fort Bragg, North Carolina — is a sharp escalation in the response to the riots and protests until now mounted by the Secret Service and the local police.

One military official likened the deployment to Trump requesting his own “palace guard” to protect him from protesters.

In addition to the active-duty military police and engineering units on their way to Washington, the defence department has also requested 600 to 800 additional National Guard troops from Delaware, New Jersey, New York, Ohio and Utah join 1,200 DC National Guard troops, a Pentagon official said on Monday night. Some of those troops are on their way, and others are already in the capital.

Governor Tim Walz of Minnesota, whose state has been at the centre of the protests, has declined Trump’s offer of a military police response in his state, and other governors have followed Walz’s lead.

Trump’s address in the Rose Garden — an event that aides were not certain would take place until about 20 minutes before he delivered it — was shaded in anger and laced with the increasingly aggressive language he had used in the 48 hours since he observed a rocket launch in Cape Canaveral, Florida.

There, he devoted much of a speech to the May 25 death of George Floyd.