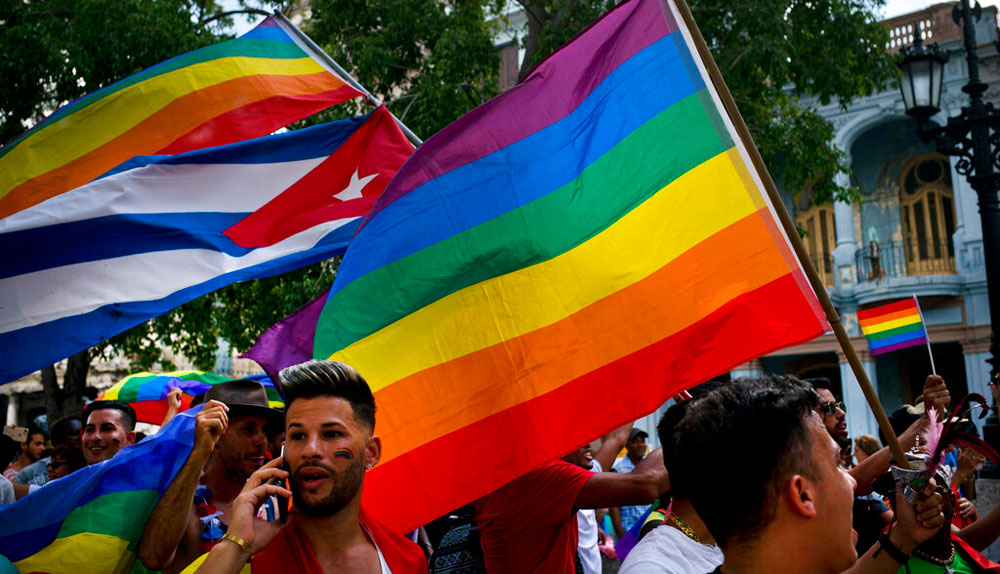 Gay-rights activists organising on social media held an unauthorised march on Saturday down eight blocks of one of Havana’s main thoroughfares before they were stopped by police.

The march was the second by a non-governmental organisation in Cuba in slightly more than a month. That’s highly unusual in a country where the only legal civil society groups are de-facto arms of the Communist government. Any sort of unofficial march or demonstration has long been met with a swift and overwhelming police response.

On April 7, more than 400 animal-lovers received an official permit and peacefully marched more than a mile through Havana, shouting slogans and waving signs calling for an end to animal cruelty.

Saturday afternoon’s gay-rights march received no such permit but the police and plainclothes state-security agents allowed it to proceed from a gathering point in Havana’s Central Park, along the Prado boulevard till it reached the Malecon, the capital’s famous seaside promenade.

A handful of marchers were arrested when they attempted to push through a massive police presence and continue onto the Malecon.

“It was a complete success because we got so many people together despite all the expectations of government interference,” said Raul Soublett, a 26-year-old gay rights activist. “It’s historic.”

The march was organised largely using Cuba’s new mobile Internet, with gay-rights activists and groups of friends calling for a march over Facebook and WhatsApp after the main government-run gay rights organization, the Center for Sex Education, cancelled a Saturday march. The government group by known its Spanish acronym Cenesex said it was cancelling its annual Conga Against Homophobia and Transphobia because unnamed groups were attempting “to distort the reality of Cuba and use our Conga to discredit, divide and substitute the true meaning of the event”.

In response, activists called for the Saturday gathering at 4pm in Havana’s Central Park, a plaza in the heart of the capital’s historic centre.

Some gay-rights activists said online that police had tried to prevent them from leaving their homes on Saturday with threats of unspecified repercussions. But more than 100 assembled and marched, chanting “It could be done!” and “Diverse Cuba!” and waving rainbow flags.

“This is because we don’t want to lose our rights to public space,” said Lidia Romero, 49, who works in a private design store.

“We’re not here in opposition to anybody,” Soublett said.

Cuba repressed homosexuals in the decades after its 1959 revolution, sending many to forced-labour camps, but the government has since barred anti-gay discrimination and Cenesex, led by Mariela Castro, the daughter of Communist leader Raul Castro, has been internationally recognised for campaigning for gay rights.

However, a Cenesex-endorsed push for gay marriage was removed from a constitutional reform this year after objections from many Cubans, including the country’s growing ranks of evangelicals.

Cenesex never clearly explained why it was cancelling the conga but said tensions with the Trump administration were a factor.

The US has recently tightened the embargo on Cuba as part of a push to topple the allied Venezuelan government, and the Cuban government typically cracks down on internal dissent when it feels threatened.