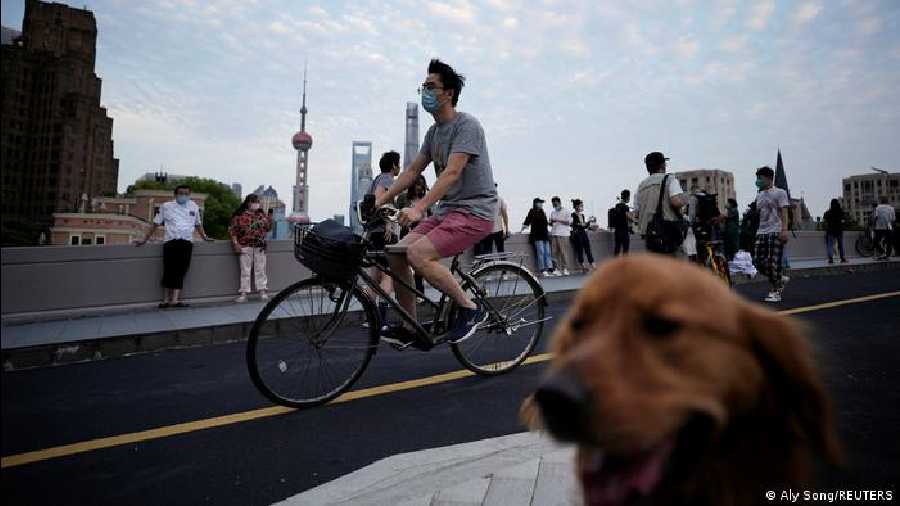 Shanghai opened for business and eased a range of COVID restrictions for residents in low-risk neighborhoods Wednesday.

Full subway and bus services, as well as basic rail connections with the rest of China, opened Wednesday; while malls, convenience stores, pharmacies, and beauty parlors prepared to operate at 75% capacity.

Residents from low-risk areas were allowed to move freely starting Wednesday after a two-month lockdown that began in late-March, which confined millions to their homes and battered Shanghai's economy.

"This is a moment that we have been looking forward to for a long time," the Shanghai municipal government said in a statement.

Restaurant dining, cinemas, gyms, and schools, however, remain closed to the public.

Residents would also require negative COVID-19 test results to use most services, leading to mixed feelings among people who were both happy and wary about how quickly the situation could change.

Austria eased mask mandates in all provinces except Vienna on Wednesday. In Vienna, people are still required to wear FFP2 masks at pharmacies or when taking public transport. Masks also remain compulsory at hospitals and at care homes for the elderly across the country.

Germany recorded 61,889 new COVID infections and 136 COVID-related deaths on Wednesday, according to data from the Robert Koch Institute for infectious diseases. The total number of COVID cases stands at 26,305,996; and deaths at 139, 000.

German authorities on Tuesday raided the properties of five individuals across four German states who were thought to be the main suspects behind a network accused of misappropriating COVID funds.

Japanese Foreign Minister Yoshimasa Hayashi has tested positive for COVID-19 and is recovering at home, the Foreign Ministry said in a statement Wednesday.

Hayashi developed a mild fever earlier but his current symptoms are limited to a sore throat, Reuters news agency reported.

State media outlet reported Wednesday that the country made progress in its fight against drought and a looming food crisis amid the pandemic.