Choking on Ukraine: How Jacques Tilly perceives Putin through art

The artist is currently in the headlines for his latest carnival float featuring a red-faced Vladimir Putin, eyes bulging as he attempts to swallow a blue-and-yellow object in the shape of Ukraine 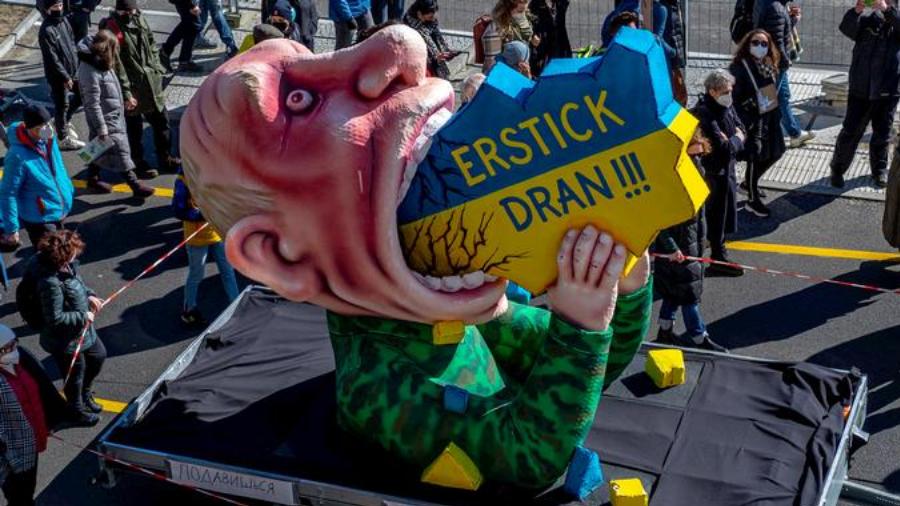 "My job is to take a very complex political situation and turn it into a very simple image," says Jacques Tilly, a German papier-mâché artist from Düsseldorf. Tilly is currently in the headlines for his latest carnival float featuring a red-faced Vladimir Putin, eyes bulging as he attempts to swallow a blue-and-yellow object in the shape of Ukraine and emblazoned with the words "Choke on it!"

In February 2022, following the invasion Ukraine, carnival events in German cities like Cologne and Düsseldorf turned into spaces for protest and political articulation. Düsseldorf authorities completely canceled carnival parades. Still, Tilly's sculpture toured Düsseldorf in February and now the city is auctioning the float, which has also appeared in protest demonstrations in Berlin.

The highest bidder will get to use the float from time to time and the money received from the auction will be donated to the war-torn city of Chernivtsi, Düsseldorf's partner city in Ukraine.

Previously, a signed sketch of the float was also auctioned by the charitable organisation Diakonie in March 2022. The proceeds helped newly-arrived Ukrainian refugees settle in the Düsseldorf region.

A long time critic of Putin, Jacques Tilly defines himself as a humanist, and therefore sides with the victims of Putin’s regime. In his creative journey spanning more than three decades, Tilly has built nine carnival floats featuring the Russian President. In 2009, he built one that portrayed Putin attacking press freedom in the country.

In an interview with DW, Tilly says that Putin, for him, has always been a "political gangster." He says, "From the beginning, I was convinced that Putin is the mafia boss of a clique that exploits the state and has established a totalitarian dictatorship. He has always supported the right-wing radicals in Europe in the past. So, he is an opponent of Europe, of pluralism. He opposes a free, open society, and therefore he is my natural opponent."

A carnival too political?

The carnival season in Düsseldorf has been Tilly's preferred moment to express his political stances for years. The carnival floats, too, have morphed into satirical expressions of political opinion. But for some critics, this politicization of carnival could potentially take away from its festive spirit, which itself is often accused of being "too primitive."

Tilly perceives carnival as a diverse and multifaceted event and therefore doesn't see a reason that his politics shouldn't have a place there. He says, "There are historical roots to why carnival came into being. And the reason is that people, especially in repressive, authoritarian societies, don't want to be told how to live, at least on one day every year. Carnival has the task of once a year upholding the freedom to speak truth to power with impunity. And that is the rebellious, anarchic element of carnival."