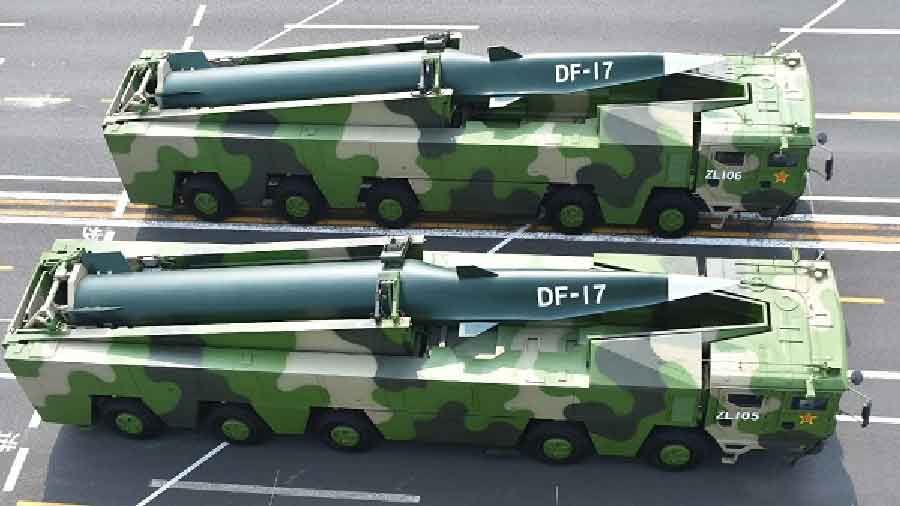 The People's Liberation Army (PLA) fired several ballistic missiles into waters to the east of Taiwan on Thursday afternoon, with all of them hitting targets accurately, a Chinese military spokesman said.

Senior Colonel Shi Yi, a spokesman for the PLA Eastern Theatre Command, said that rocket forces in multiple locations on the mainland launched several types of missiles carrying conventional warheads to designated waters off the eastern coast of Taiwan.

The Rocket Force is a new wing of the Chinese military, which was created a few years ago under the reforms launched by President Xi Jinping to exclusively deal with missile systems.

The drills tested the rocket forces' capabilities to conduct precision attacks and area-denial tasks, Sr Col Shi noted, adding that the missile test operations had concluded and related airspace and waters had been reopened to civilian use.

The PLA will perform long-range artillery strikes and ballistic missile launches to target areas around Taiwan in the coming days, official media here quoted the military as saying. On Wednesday, the PLA said it plans to conduct the war games in the region from August 4-7. The drills were expected to continue till Sunday.

This is the second time this week the Chinese military announced missile test plans in the Taiwan Strait.

China views Taiwan as part of its territory, despite having never controlled it and has long vowed to reunify the island with the Chinese mainland, by force if necessary.

Taiwan has confirmed that the PLA has launched several Dongfeng tactical ballistic missiles capable of flying up to 500 km into waters northeast and southwest waters of the island on Thursday afternoon, a day after Pelosi left the island.

A statement from the island's defence ministry said the firing of multiple DF series missiles began around 1350 BJT. It is the first time mainland missiles have flown over the island.

Taiwan also cancelled airline flights on Thursday as the Chinese navy fired artillery near the island.

The PLA Eastern Command, which oversees military operations in Taiwan Straits, issued two statements saying that it conducted precision strikes in specific areas over the east of the Taiwan Strait.

All the missiles hit the target accurately, testing the precision strike and area denial capabilities. The entire live ammunition launch training mission has been successfully completed, and the relevant sea and airspace control has been lifted, the PLA statement said.

Video footage from the state-owned China Central Television showed several Dongfeng series ballistic missiles were launched from unknown bases on the mainland, and launched at targets in waters off Keelung port, Hualien and Taitung counties.

The Chinese military will do what they have said, Tan said in a statement, the Post reported.

The collusion between Taiwan and the US will only plunge Taiwan into a deep disaster and bring serious harm to Taiwan's compatriots, Tan said.

The PLA drills also came amid vocal criticism by Chinese especially in the local social media about the failure of China stopping Pelosi's visit despite public assertions earlier by Beijing that it would not allow her visit, highest by a top American leader in 25 years to Taiwan to go ahead.

Travelling by US Air Force plane along with a US Congressional delegation, Pelosi arrived in Taipei on Tuesday and left on Wednesday under the glare of international publicity.

Pelosi's visit was regarded as a setback for the image of Chinese President Xi, who is widely expected to get an unprecedented third five-year term unlike his predecessors. He is expected to be endorsed in the once-in-a-five-year Congress of the ruling Communist Party of China in the next few months.

In Beijing, Chinese Foreign Ministry spokesperson Hua Chunying on Thursday staunchly defended the military drills, saying what we are taking and will be taking are a necessary and timely response and countermeasures which have been fully thought through and fully assessed, to protect sovereignty and territorial integrity, in line with international laws, and a warning to provocateurs.

About the US State Department's assertion that China is using Pelosi's visit as an excuse to change the status quo, Hua, who is also the Assistant Foreign Minister, shot back asking, What is the status quo on the Taiwan question?

It is crystal clear that two sides on the Taiwan Strait belong to one and the same China. China's sovereignty and territorial integrity have never been split. This is the real status quo on Taiwan," she asserted.

Accusing the US of creating the crisis in the Taiwan Strait, Hua said the US is colluding with Taiwan independence" forces.

The US side has been distorting, obscuring and hollowing out the One China Principle. It is playing the Taiwan card' to contain China," she said, adding that things would not have come this way without Pelosi's visit to Taiwan .

She also hit back at Group of Seven (G7) Foreign Ministers' statement, calling on China not to use the Pelosi's visit to Taiwan as "pretext for aggressive military activity in the Taiwan Strait", saying they still live in an imperialist world of the past to ride roughshod over Chinese people.

Furious over the visit of Pelosi to Taipei, the Chinese military on Wednesday conducted a series of naval-air joint drills around Taiwan amid speculation that it may be attempting a blockade of the self-ruled island.

Thursday's exercises indicate that Beijing is ramping up its intimidation campaign targeting Taipei in the wake of Pelosi's visit.

It is the first time the PLA has staged such a massive and complicated war game in what it deemed a de facto blockade of the island with almost all the PLA drill areas taking place across the median line that divides the Taiwan Strait and also covering the sensitive eastern coast of Taiwan, Hong Kong based South China Morning Post reported.

A US Navy P-8A Poseidon maritime patrol plane and American MH-60R anti-submarine helicopter Seahawk entered an area to the southwest of Taiwan where the PLA is conducting drills close to Kaohsiung around noon when the war games were getting started, the Post report said.

Taiwanese media reported that the Taiwanese air force was scrambling Mirage 2000 and F-5 fighter jets early on Thursday to monitor the situation before the PLA started its war games.

Meng Xiangqing, a professor at the National Defence University, said the exercises cover areas including an area to the east of Pingtan Island in mainland Fujian province, and off the coast of Keelung Port in northern Taiwan.

The six major areas of this military exercise are the training areas closest to Taiwan island, he told mainland state broadcaster CCTV. It has formed an encirclement of Taiwan island, the Post report quoted him as saying.