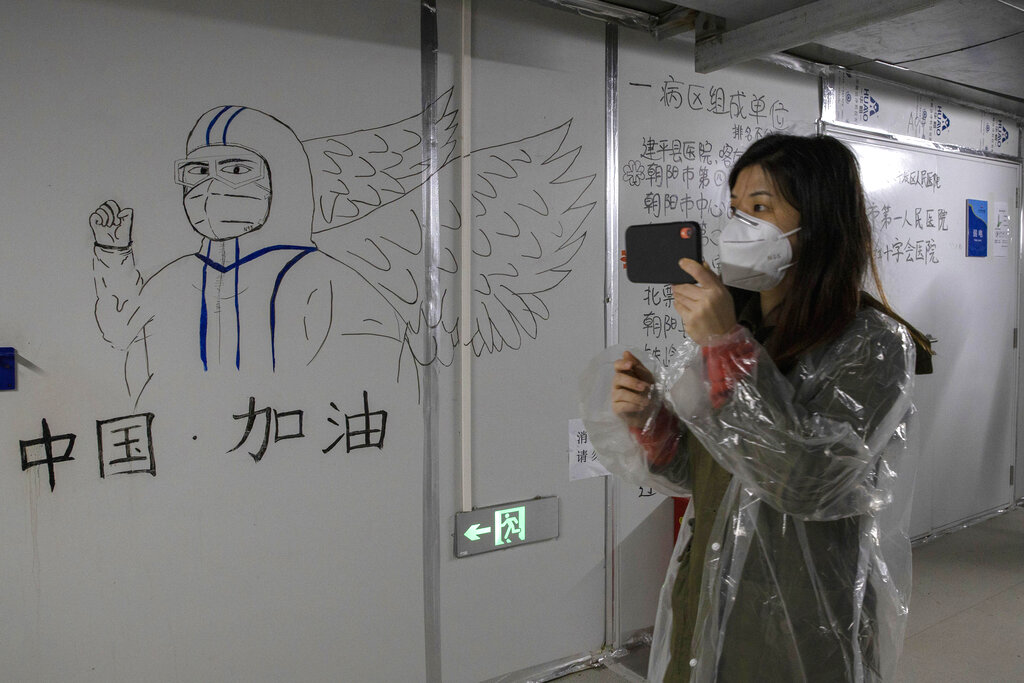 A visitor looks at art work with the words "Go China" left by workers at the Leishenshan Hospital which was constructed in a parking lot from prefabricated modules in two weeks in Wuhan in central China's Hubei province, Saturday, April 11, 2020,
(AP)
Reuters   |   Published 11.04.20, 10:21 PM

China reported on Saturday a rise in new coronavirus infections, mostly in travellers arriving from abroad, as doctors in the central city of Wuhan, where the virus initially emerged, warned its behaviour was still not well-understood.

Tough curbs imposed in China since January have reined in infections sharply since the height of the pandemic in February, although it has spread worldwide to infect 1.6 million people with 100,000 deaths.

But Chinese authorities fear the possibility of a second wave triggered by arrivals from overseas or asymptomatic patients.

“We can’t say that there is no such potential risk,” said Wang Xinghuan, president of Wuhan’s Leishenshan hospital, its second built especially for virus patients.

While some experts do not expect a big second wave, thanks to China’s stringent controls, the possibility could not be ignored, he told reporters.

“At present, from the hospital perspective, our understanding of the virus is still very insufficient,” Wang said, during a hospital tour organised by Wuhan officials.

For instance, it was not immediately clear how infectious asymptomatic people were, he added. Doctors in China have seen some differences in virus behaviour from that experienced in Europe and the US, said Zhao Yan, a doctor at Wuhan's Zhongnan Hospital.

“The most obvious one is that in Europe and the US quite a few people lost their sense of taste and smell, (but) we saw very few such cases,” Zhao said. The National Health Commission said 46 new cases were reported on Friday, including 42 from abroad, up from 42 a day earlier, as Hubei province, whose capital is Wuhan, reported no new cases.