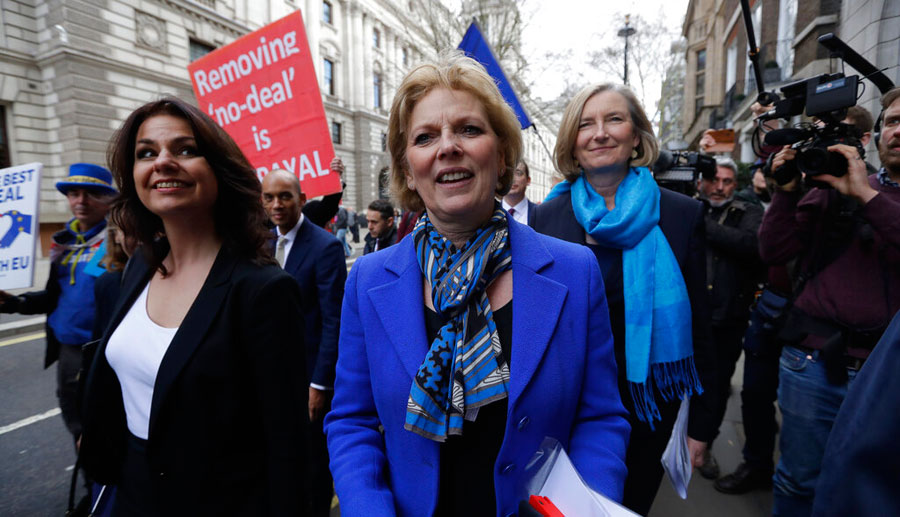 Brexit-driven cracks in Britain's political party system yawned wider Wednesday, as three pro-European lawmakers quit the ruling Conservatives to join a new centrist group of independents who oppose the Conservative government's determination to take Britain out of the European Union with or without a divorce deal.

Anna Soubry, Heidi Allen and Sarah Wollaston resigned to join eight ex-opposition Labour Party lawmakers in an alliance dubbed the Independent Group. The defections involve only a small fraction of the 650 lawmakers in the House of Commons, but mark the biggest shake-up in decades for Britain's political parties.

The breakaway lawmakers hope to gain members from disgruntled pro-Europeans in both the Labour and Conservative parties and forge a new force at the centre of British politics. They are inspired in part by the 'En Marche' movement of French President Emmanuel Macron, which dominated France's most recent presidential and legislative elections at the expense of the country's mainstream parties.

'Both our parties are broken. We are going to #ChangePolitics for the better,' the group tweeted Wednesday.

In a letter to Prime Minister Theresa May, the three ex-Conservatives accused party leaders of abandoning the political centre, and said 'the final straw for us has been this government's disastrous handling of Brexit.'

Britain's departure from the EU is scheduled for March 29 but no deal on divorce terms has been agreed on yet by British lawmakers. The three departing lawmakers accused May's government of allowing the Conservatives' hard-core pro-Brexit wing to push the country to the edge of an economically damaging 'no-deal' exit from the bloc.

Allen said May had been 'bullied into submission' by Brexiteers and was 'dragging the country and Parliament kicking and screaming to the edge of a no-deal abyss.'

Soubry said attempts to modernise the right-of-centre party by encouraging a more diverse membership and tackling social problems had been wiped out by the all-consuming obsession with Brexit.

'I'm not leaving the Conservative Party — it has left us,' she said.

May said she was saddened by the decision, but said the government was 'doing the right thing for our country' by implementing voters' decision to leave the EU.

The three join eight Labour rebels who quit the main opposition party this week over its direction under left-wing leader Jeremy Corbyn. The Labour defectors accuse him of mounting a weak opposition to May's plans for leaving the EU and of failing to stamp out anti-Semitism in the party.

Joan Ryan, one of the ex-Labour legislators, said the party had become 'infected with the scourge of anti-Jewish racism' under Corbyn, a longtime supporter of the Palestinians.

There have long been signs that voters' 2016 decision to leave the EU could spark a major overhaul of British politics. Brexit has split both the Conservatives and Labour down the middle into feuding pro-Brexit and pro-EU wings, and has empowered the ideologically driven wings of both parties at the expense of centrists.

It's unclear whether the fraying of the two parties that have long dominated politics will help break Britain's political impasse over Brexit. Last month British lawmakers rejected the divorce agreement agreed upon by May's government and the EU, and May's attempts to win changes to the deal from Brussels have not borne fruit.

Members of the Independent Group want to hold a new referendum on Brexit that could keep Britain in the 28-nation bloc. May's Conservative government opposes that idea, and Labour under Corbyn has been lukewarm about it.

More lawmakers are likely to join the Independent Group in the coming weeks, but its chances of success are hard to predict.

Rob Ford, professor of politics at the University of Manchester, said the realignment — 'a cross-party split of the centre against the extremes' — was unprecedented in postwar British politics.

And while Britain's political system has long been resistant to change, Ford said the dominance of the two big parties, Conservatives and Labour, was weakening.

'People don't have a 'team' that they feel attached to in the numbers they used to,' he said. 'So that makes it easier for a new force to break through.

'And there is a new form of tribal attachment in town, which is attachment to your (Brexit) referendum vote. This new party is clearly going to be the political wing of 'Remain.''