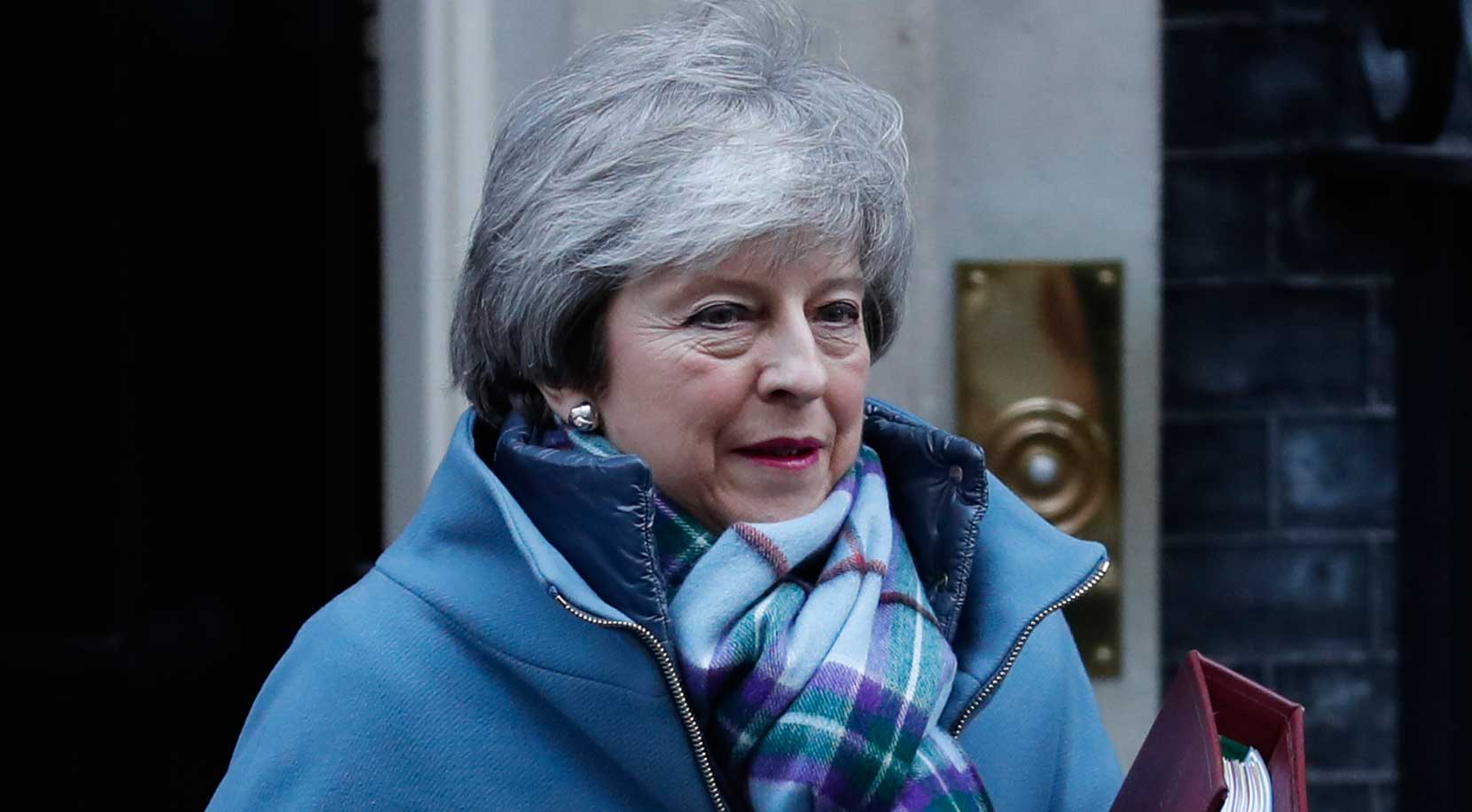 British Prime Minister Theresa May’s statements on Brexit are devoid of economics. Parliament debates do touch on economics, but no one in Parliament has laid out the economic case against Brexit as the Confederation of British Industry has.
(AP Photo)
Ashok V. Desai   |     |   Published 05.02.19, 03:37 AM

Theresa May looks good. She does not have much competition amongst politicians, if we leave out Kashmiris, who cannot help looking good. But if one has to watch leaders on television, most options are optically worse. Her defeat in the House of Commons is the worst any British prime minister suffered in a long time (largely because prime ministers who are at risk of defeat have the sense to avoid a vote); but her demeanour in a chamber where she faced tough, hostile questions, not least from members of her own party, was cool and businesslike. Every time she is criticized or interrogated in the House, she springs up, hauls her enormous dossier on to the lectern, and gives firm answers without getting upset.

That is in contrast to her achievement: she made an abysmal deal with the European Union and, not surprisingly, failed to convince her members of Parliament that it was the best deal available. The fault is not all hers; it was her countrymen and women who voted to leave the EU. David Cameron, her predecessor, was so disappointed with their decision that he resigned and retreated to his country cottage. She put on the prime minister’s mantle with the conviction that her duty was to carry out the wishes of her people expressed in the referendum. While members of Parliament have changed their minds and the British people may also split differently in another referendum, May carries on with her outdated mandate.

The British decided in 2016 to leave the EU because they could not bear Poles coming and taking jobs they themselves were not too keen on. Three years later, their representatives decided that Brexit on the terms May had negotiated was unacceptable. She got the best terms she could. The EU has no reason to shower favours on a leaving member; so no new prime minister is likely to get better terms for Brexit. After seeing the high cost of Brexit, the members of Parliament also implicitly decided that options that involved staying in the Union must be explored. May’s defeat was a byproduct of this preference. But whether one is for or against Brexit, no one would wish on anyone the treatment May received in her meetings with her fellow members. One could not watch her treatment by her peers in the meetings in Brussels, but I guess it would make one even sorrier for her. She does not have the full support even of her own ministers. Tobias Ellwood, one of her defence ministers (Britain, with armed forces of less than 200,000, has five defence ministers), tweeted: “Cooked a banana cake yesterday. Told my son it will be ready in 20 mins — according to the cookbook. It took 30. It was a big decision — honouring the cookbook or take more time to get the right result.”

The long Brexit drama reminds me of India’s Independence, or what could be called the divorce of Britain from India. M.K. Gandhi, the standard-bearer of Independence, was no enemy of Britain. He started as a loyal colonial subject. He organized an ambulance corps for the British during their war with the Boers in South Africa. It took a good deal of British insensitivity and inhumanity to turn him against them. He gave them a lot of time before he asked them to quit India. Between the Round Table Conference in 1931 and the Quit India campaign in 1942, he stopped asking for independence; he retired to Sevagram and experimented with ashram community living. The Congress formed governments in a number of provinces; they resigned in 1939 when Lord Linlithgow, the viceroy, declared without consulting the Congress that India was at war with Germany; but after that it too did nothing. The British had a chance to give India dominion status and make friends with it; they simply ignored it. They proved themselves very good at apathy and outrage, and incompetent at negotiation. Over seventy years later, they have proved equally inept in bargaining with their European neighbours.

That is, of course, not how the British see it. When they joined the European Community in the 1970s, it consisted mainly of West European countries with standards of living similar to Britain’s. Then, in 2004, eight East European countries — Estonia, Latvia, Lithuania, Slovakia, Slovenia, Hungary, Poland and the Czech Republic — were admitted. Soon, workers from these countries started coming to work in Britain. Their standards of living were much lower; so were the wages they were prepared to accept. The standard of living of the poorest 25 per cent of Britons, with whom they competed, declined. The impact was exacerbated by the recession of 2008, from which Britain recovered very slowly. Real wages drifted down till 2018. Britons, especially poor British workers, blame East European migrant workers for their woes. Free movement of labour within the EU has been a major factor behind the unpopularity of the EU in Britain.

This hostility is not shared by British business. Confederation of British Industry is appalled at the thought of Brexit. It put out five fact sheets listing the advantages Britain gains from EU membership. They build up an argument that after a quarter century of single market, Britain is closely integrated with the EU and cannot afford to cut off the links peremptorily. The 500 million people and the market of $16.2 trillion are major benefits of EU membership; and the EU’s bargaining power has opened large markets elsewhere to the United Kingdom. It has received substantial foreign investment from the EU; and although some of EU’s labour legislation is dubious, free movement of labour has been good for Britain: three quarters of a million Britons live in Europe. Britain has substantial voting rights in the EU, and can be even more influential if it builds alliances. If Britain left the EU, it would have to negotiate various agreements with the latter on trade, investment, movement of people and so on; in doing so, EU, with its enormously larger economy, would have disproportionate bargaining power. Instead of leaving the EU, Britain should use its influence as a member to make the EU more competitive and outward looking, and to improve its regulatory mechanisms.

Confederation of British Industry has made a good case for Britain to remain in the EU; but looking at the debate in Britain’s Parliament as well as its media, CBI has made a poor job of reaching out to the British people or politicians. British businessmen once built sailing ships, rode the winds to trade all over the world, and made Britain the world’s leading economic power; it is ironic that they cannot even influence British public opinion today.

Perhaps it is the other way round: the British are unwilling to listen to economic arguments on Brexit. May’s statements on Brexit are completely devoid of economics. Parliament debates do touch on economics, but no one in Parliament has laid out the economic case against Brexit as the Confederation of British Industry has. The disconnect between Britain’s economic interests and British politicians’ concerns could not be greater. This disconnect led to Britain’s unceremonious departure from India; over seventy years later, it is about to lead to its departure from the EU.

A moment of metamorphosis of the UK party system