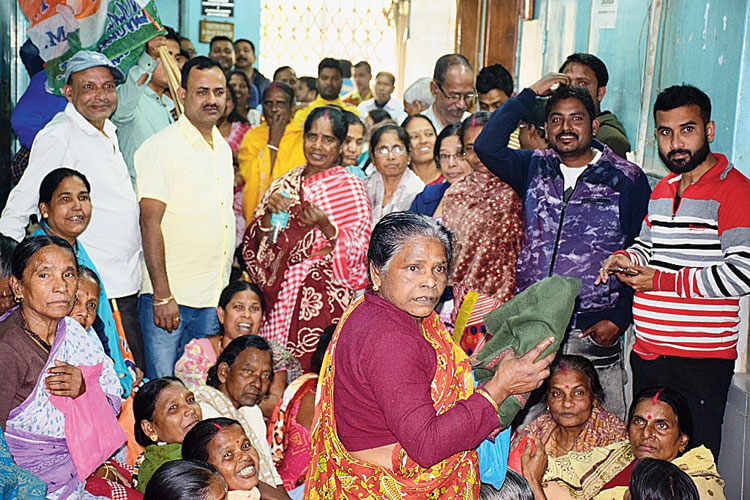 A group of elderly women from the ward of Siliguri Trinamul Congress councillor Ranjan Silsharma confined mayor Asok Bhattacharya to his chamber for three hours on Monday, alleging that the Left Front-run civic board did not pay old age pension in the past two years.

Bhattacharya denied the charges and said Silsharma had orchestrated the gherao to cement his position in Trinamul ahead of polls to the Siliguri Municipal Corporation.

Around 1.30pm, hundreds of elderly women walked into the SMC headquarters and sat on the passage that leads to the mayor’s chamber. Silsharma and some Trinamul supporters of his ward 37 shouted slogans against the mayor and said they would not let him leave his office.

The mayor asked the councillor to visit his chamber for talks but Silsharma rejected the offer outright.

“There are over 500 underprivileged senior women in ward 37 and all of them are being deprived of old age pension by the civic board since February last year. We want the mayor to apologise to these people for his failure to provide financial assistance to them,” Silsharma said.

The protest left the mayor stuck in his office for three hours. “I wanted to talk to the councillor and the demonstrators, but they were not ready for that. As they confined me to the office, I could not hold a meeting with health officials and councillors regarding dengue prevention. I have to take insulin at regular intervals but could not because of the protest,” Bhattacharya said.

“Despite cash crunch, we are trying to clear old age and widow pensions in every two months. The SMC has also decided to increase the amounts from March. Ahead of the civic polls, the Trinamul councillor staged a drama to show that he is active,” the mayor added.

SMC sources have said there are over 15,000 beneficiaries of old age and widow pensions in the SMC area. They receive Rs 450 in every two months.

Around 5pm, Bhattacharya went out of his chamber and assured the demonstrators that he would try to resolve their problems in a month. Following the promise, the demonstration was withdrawn.

Ranjan Sarkar, the leader of the opposition, said: “The Left board has deprived the Siliguri residents of their dues. In the coming days, we will organise similar movements.”