When greenery is harmful: Eucalyptus a wrong choice

As Forest Week concludes, two species that are doing more damage than good 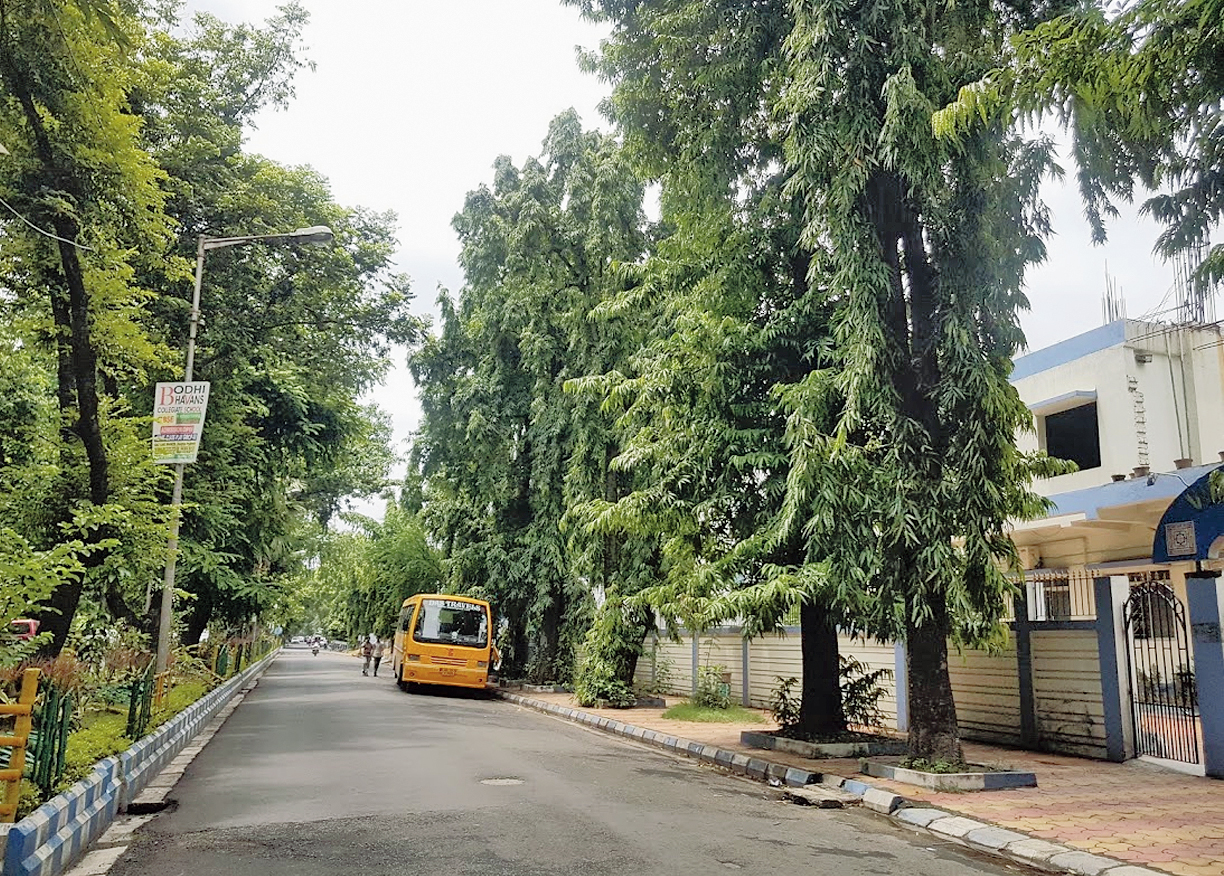 It’s not enough to plant trees; one also has to take care to plant the right kind of trees.

The Telegraph Salt Lake spoke to Biswajit Roy Chowdhury, environmentalist and chairman of South Asian Institute for Advanced Research and Development about the wrong kinds of trees growing in our township. Roy Chowdhury also teaches geography at the CL Block branch of Vidyasagar University. Here’s what he had to say —

Too narrow for cover

Of late, a species of tall, narrow trees can be spotted across the township. These are Eucalyptus and have become an avenue tree of choice for the civic authorities as they grow very fast. But these are not indigenous to our climate and so come with their share of complexities.

Calcutta’s climate needs large canopy trees such as banyan, jackfruit and mango and a major reason is the nature of rain here. The rain in Calcutta can be harsh and if the water hits the ground with that intensity, it can cause the soil to erode.

But if there are umbrella-shaped canopy trees, the leaves and branches take the first impact. The rain water then trickles down the tree gently, recharging the soil without eroding it.

But for the sake of beautification if we plant maple trees in Salt Lake, they won’t be able to shield much of the ground. This is because the tree is conical in shape and rather narrow. Such trees belong to regions where it snows more than it rains. Since snow is soft on the ground, it does not damage it on impact. Also trees like pine, maple and eucalyptus do not produce as much oxygen as the banyan. 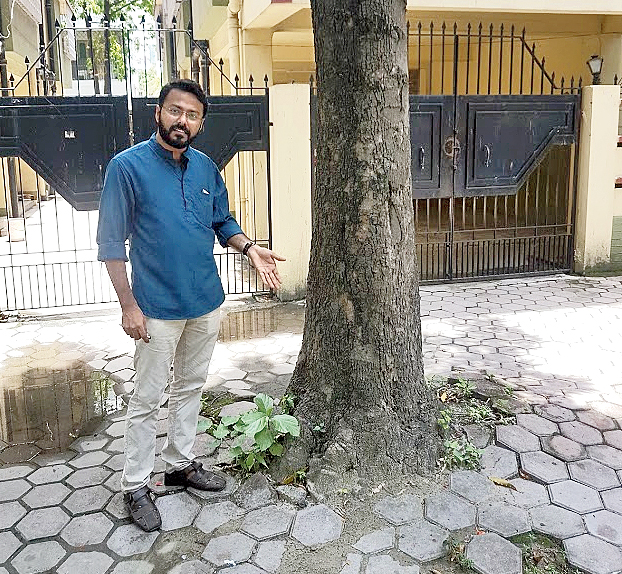 Biswajit Roy Chowdhury shows how the base of a tree has not been given space to grow.
(Brinda Sarkar) 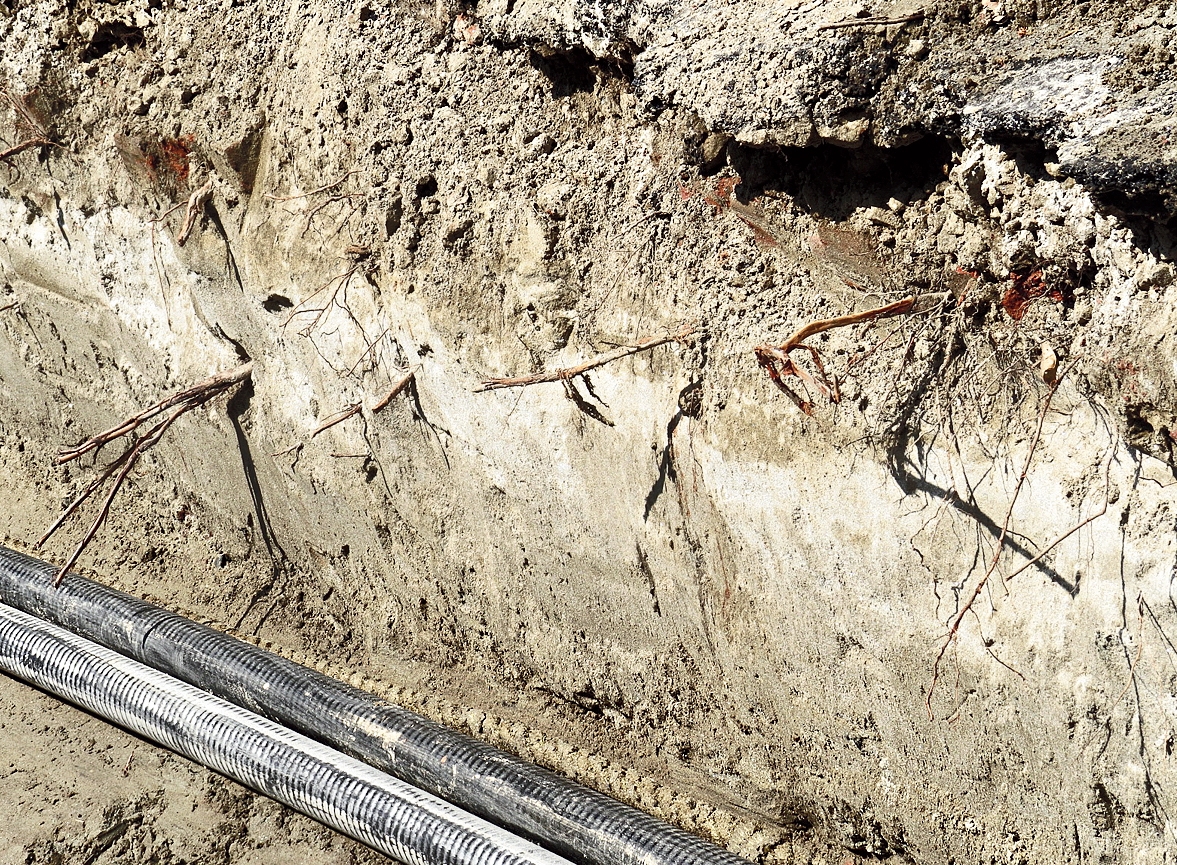 Chopped roots of trees on a Broadway divider in HA Block stick out of the soil as electric cables are being installed underground.
(Sudeshna Banerjee)

Nature has perfected everything and we need to study it before blindly copying what works in other parts of the world. Digha’s jhau trees, for instance, have interwoven leaves that trap strong coastal winds. But they would be useless in Salt Lake.

The irony is that our township is full of eucalyptus trees now. These trees suck more ground water than indigenous plants, do not contribute as much oxygen and do not even provide shade to pedestrians in our sweltering summers.

Why our trees collapse

The collapse of even a single tree is bad news and one needs to examine the reason to ensure it does not happen again.

Perhaps the base of the tree was suffocated with tiles or cement around, giving it no room to spread. How would ground water recharge be possible if the raindrops trickling down tree trunks find no soil underneath to seep into? Sadly, several trees on Salt Lake’s footpaths are built without allowing any room for the trees.

Another reason for a tree to collapse is unscientific chopping of its branches. Before the Pujas, advertisers want their banners hung up on trees and the suitable height for this is not too high up. So labourers go chop the lowest branches, making the tree top-heavy.

Sometimes they only chop branches on one side of the tree, making the plant heavier on that side. And then at the first sign of a Nor’wester, these disbalanced trees fall. 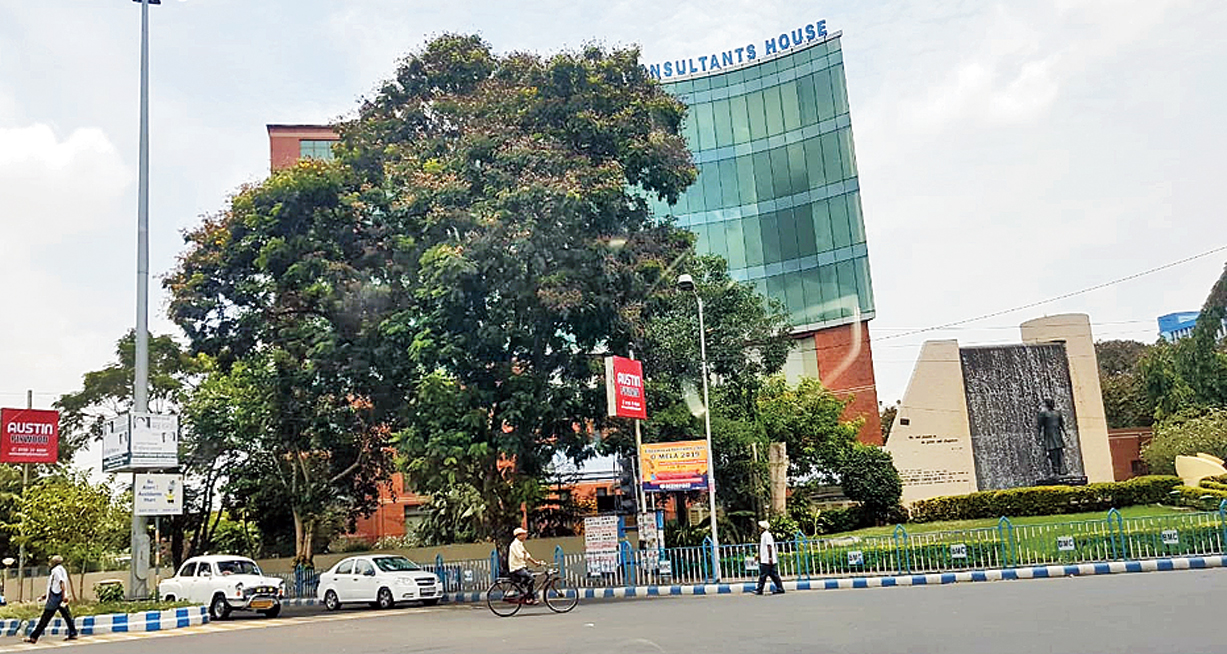 One cannot chop trees in the name of building roads or other development projects either. We have technology now to transplant them so the authorities must exploit this option. Even a single tree cannot be sacrificed.

At times they leave the tree intact but chop off part of the roots. This weakens the tree. How stably would a person stand if three of his toes were chopped off?

Sometimes government departments plant saplings in lieu of felling trees but who is to see if they survive? Instead of blaming the government, residents should take up the responsibility of nurturing them. If there is a plant outside your house, water it. If the government has built a fence around a sapling, don’t dump trash in it.

The government, in fact, should conduct environmental audits at a micro level. They need to know the number, type and location of trees in their area so they can identify space to plant more. At present only the benefits are counted before undertaking new projects but one should also measure the environmental costs before deciding if a project is feasible.

Public participation is paramount to make these plans a success. Children should especially be involved as it is easier to imbibe healthy habits in them. Urban agriculture must be encouraged on rooftops too.

A senior civic official, with experience in the tree upkeep department, said if they try to chop Eucalyptus now, the public would protest. The mayoral council member in charge of the environment, Rahima Bibi Mondal, said they lack the infrastructure to transplant trees that topple over due to storms.

“As for the cable workers chopping off roots, there is nothing we can do. They pipes are being laid for the greater good of Salt Lake,” she said. “What’s alarming is that outsiders come and chop branches of Salt Lake’s trees to sell as firewood. I have caught them red-handed several times and alerted the police and municipal commissioner about it,” she said.