Some people did fall on SUV door that hit CM: Report

Mamata's allegation about conspiracy is not yet proved, but the preliminary probe suggests she was partially right, said a source 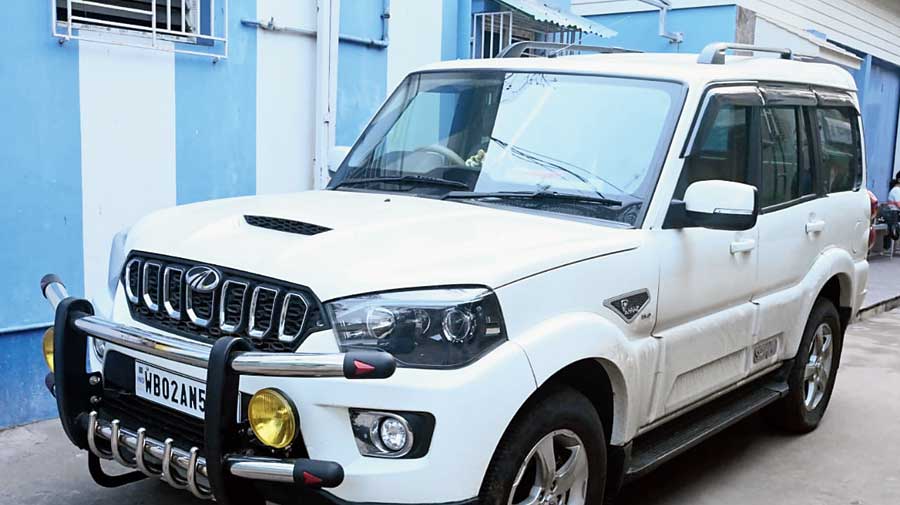 The SUV used by Mamata at the time of the incident in Nandigram was parked outside her residence in Calcutta on Thursday. The car was shown to journalists by Trinamul leader Firhad Hakim to debunk the theory that the vehicle had hit an iron beam by the road and that was why the chief minister had suffered the injury to the leg. Hakim said the vehicle didn’t have any scratch and hence, the accident theory was wrong
Telegraph picture
Kinsuk Basu, Pranesh Sarkar   |   Calcutta   |   Published 12.03.21, 03:18 AM

The East Midnapore district authorities on Thursday sent a preliminary report to Nabanna on the incident that had left Mamata Banerjee injured on Wednesday, suggesting that the door of the Scorpio that the chief minister had been riding had gone back to hit the chief minister’s left leg after some men had fallen on it.

The report has revealed a group of men from among hundreds who were running behind the chief minister’s car at Birulia market in Nandigram on Wednesday evening to catch a glimpse of her had tripped after hitting a four-feet high concrete pole that stood on the 12-feet wide road and fell on the car’s door that she had left ajar while waving at the mass, said sources.

“The door, which was heavy since it was a bullet-proof vehicle, went and hit the CM even as she was trying to set her left foot on the ground from her seat in the front. This caused severe injury to her left foot,” an official quoted the preliminary report.

The report reached the state secretariat within hours of district magistrate Vibhu Goel and superintendent of police Praween Prakash visiting the Birulia market to inquire about the incident. “This is a preliminary report. The district administration has sought time to send a detailed report,” said a senior official of the home department.

The report partly corroborates the version of Mamata, who had said immediately after the incident that four-five men had forcibly slammed the door of the SUV with an intention to injure her. The saffron ecosystem had said the door, which was open, had hit an iron beam and that had resulted in the accident.

“The CM’s allegation about conspiracy is not yet proved, but the preliminary report suggests she was partially right,” said a source.

The report, according to officials, states hundreds of villagers had started following the chief minister soon after she finished visiting a temple near Birulia market, climbed down four steps of the temple and walked down around 15 feet to get into her car.

Mamata boarded her Scorpio without hassle and just as the car started making its way towards her rented accommodation at Reyapara, a huge wave of people kept trailing the car forcing the driver to steer his way very slowly down a 12 feet wide road, said the sources aware of the report.

Enthused by the excitement of the swarming mass on either side of the road, the chief minister, seated in the front seat beside the driver, opened the door and kept waving at her followers.

At a distance of about 20 feet from where the Scorpio was making its way among the crowd stood a four feet high concrete pole. Villagers have told the police that it was set up to prevent heavy vehicles from entering the road.

Some people in the crowd that was running along with the convoy hit the concrete pole having missed it apparently in the darkness of the evening.

“A few of them tripped and fell on the door that was left partly open by the chief minister, who was about to step down and had even put her left leg forward. The door hit her left ankle leaving her in excruciating pain. The chief minister had even screamed in pain, which a few shop owners near the site have heard,” the report states.

Sources said the top brass of the government would wait for the final report from the district authorities. Ahead of sending a detailed report, the district police have initiated a probe into the incident after drawing up a specific case at Nandigram police station.

The police said the detailed probe would try to answer some questions like why there was inadequate police deployment along the VIP’s line of route at Nandigram, why enough civic volunteers weren’t deployed to hold ropes that would keep masses at a bay, how thousands of villagers arrived in front of the convoy when Mamata Banerjee is a Z-category protectee.

“There was a clear failure on the part of the local police in handling the crowd and the chief minister could have suffered an even bigger accident,” said an officer of the home department.

The Election Commission sought a report from the chief secretary and two special observers deployed in the state on the “incident of attack” on the chief minister by 5pm on Friday.

“We didn’t send any report to the EC today (Thursday). But we will definitely send it within the given timeframe,” a senior official said.

The chief electoral officer of Bengal and the additional director general of police (law and order) held a video conference with all district magistrates and police superintendents and sent an instruction to tighten security of VVIPs like Prime Minister and the chief minister during their district visits ahead of the polls.

The special police observer, Vivek Dube, is scheduled to visit East Midnapore on Friday. “He would hold meetings with the district officials but it has no connection with the inquiry into the incident in which the chief minister was seriously injured,” said a source.