Bengal Elections 2021: Do not vote for BJP, says Tikait at Nandigram 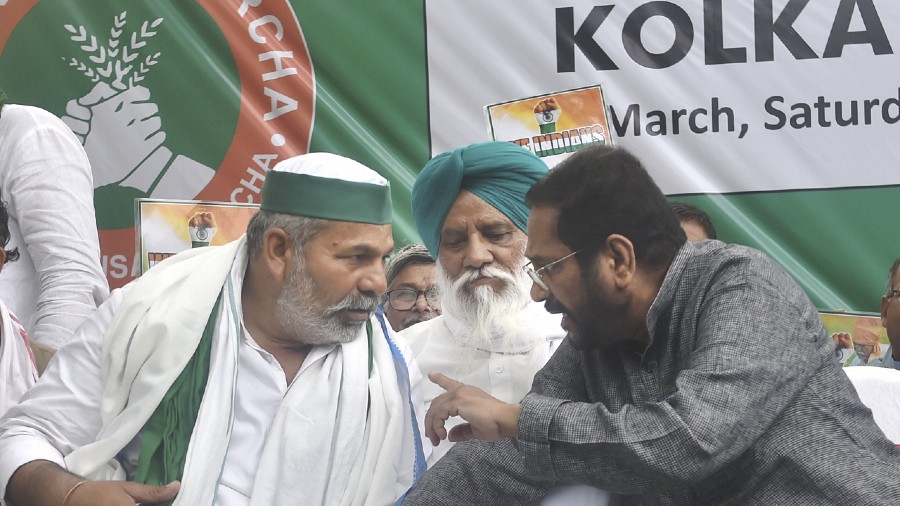 Farmers in Bengal held mahapanchayats on Saturday in the city and at Nandigram, where Chief Minister Mamata Banerjee is in the fray, at the call of the Samyukt Kisan Morcha and urged voters not to vote for the BJP in the coming West Bengal Assembly poll.

Farmer leader and Bharatiya Kisan Union chief Rakesh Tikait, one of those spearheading the four-month-old farmers’ stir against the Centre’s farm laws, reached the state during the day to be part of the Mahapanchayat.

Tikait, who was received at the airport by TMC MP Dola Sen, later addressed gatherings of farmers in the city and at Nandigram in East Midnapore district along with social activist Medha Patkar.

Patkar and Yogendra Yadav, had reached Calcutta on Friday to address a mahapanchayat at Ramlila grounds, which was followed by an intellectual meet.

Alleging that the BJP-led government at the Centre is intent on breaking the backbone of the farmers and their movement, Tikait said it is “anti-people”.

“Don’t vote for BJP. If voted to power they will give away your land to big corporates and industries and make you landless. They will hand over the country to big industrialist groups putting your livelihood at stake and in danger,”he said.

Calling BJP “a party of cheats” which hides its sympathy for the rich, Tikait said “We will be on the side of those who oppose BJP, those who will stand by the farmers and the poor.”

Clarifying that the Krishak Mahapanchayat in Bengal is not meant to pledge support to any particular non-BJP party in the state, the Bharatiya Kisan Union chief said “I am not here to seek votes for a particular party. We are here to issue an emphatic appeal to start the battle against BJP on behalf of the farmers in Bengal.”

Referring to Nandigram, he said the land of farmers’ agitation will give new direction to the movement against the farm bills.

On the ongoing farmers’ stir in Delhi, he said the protestors are ready to continue their agitation for a long period as their morale is high.

Tikait is also expected to visit Singur, one of the epicentres of anti-farm land acquisition agitation in 2006-07.

Patkar warned against the “sinister design” of the Narendra Modi government to rob small and marginal farmers of their right over their small plots of land. Also it does not allow farmers to decide the remunerative price of their agri produce.

The people of Nandigram must show the way by giving the lead against the BJP's objective to thrust the farm laws, she said.

The social activist also urged the people to exercise their franchise cautiously.

The Samyukta Kisan Morcha (SKM), an umbrella body of over 40 farmers’ unions, had on Friday urged ploughmen and other people of West Bengal not to vote for BJP arguing that electoral defeat will force the BJP-led government at the Centre to repeal the three farm laws.

Patkar had on Friday condemned the Centre for allegedly insulting the farmers’ stir and had said even the British occupiers had not resorted to acts which the present government is indulging in.

She had welcomed the passage of a resolution against the farm laws in the West Bengal assembly.