Advertisement
Home / West-bengal / Up close, the heat of distant fires

Up close, the heat of distant fires

Kashmiris have forever felt at home in Calcutta. Does that remain the case after Pulwama? 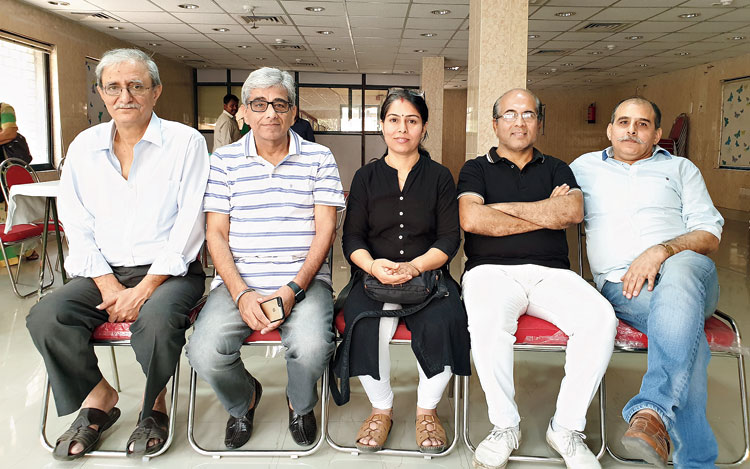 This City,” Plato had written in Republic, “is what it is because our citizens are what they are.” But settlers, for-ced to choose a city as home under duress, can at times, hold the mirror up to it in a way original inhabitants cannot.

Days after it had been reported that bigoted mobs had threatened a Kashmiri doctor based in Calcutta, a group of Kashmiris — all of them Pandits — who have embraced Calcutta after being hounded out of the land that they once called home, gathered in Kashmir Bhawan in Salt Lake to discuss whether the Calcutta they knew is, in fact, changing. Twenty cases have been lodged by the police against miscreants who intimidated Kashmiris. Forty arrests were made in Bengal alone after Pulwama.

Yet, the talk began with two women — one had left Srinagar in the early 1950s and the other reached Calcutta as recently as 2013 — eagerly pointing to some of the redeeming features of this metropolis. “Bengali families are refreshingly gender inclusive,” said Suman Raina, who was born in Anantnag. Reena Dhar, elderly and experienced, joined in by saying, “It is still one of the safest cities with very little explicit discrimination.” But she added, “It always helps if one can pick up Bengali quickly.”

Rajesh Tikoo, another member of the Kashmir Sabha, offered a poignant example of Calcutta’s fabled spirit of inclusion, telling the gathering how a business deal, which he had expected to come undone, had been salvaged after the negotiator, a Bengali, came to know that Tikoo was a displaced Pandit from Kashmir.

Other aspects of a shared culture came to light too. Narendra Kaul is convinced that Kashmiris can give Bengalis a run for their money in two things: “adda” and “an ability to take things easy”. Suneel K. Kaul swore that both communities love animated conversations; “Don’t forget our common fondness for rice,” chirped Reena Dhar. “Add to the list the shared devotion to the shakti cult,” said Suneel. There was excited chatter over Durga Puja, that quintessential symbol of Bengal’s accommodation and pluralism, even though it soon became evident that the blatant commercialisation of the festival has not gone unnoticed.

But none of this mutual admiration could ignore the proverbial elephant in the room: the bullying of the Kashmiri doctor in Calcutta or the assault of a Kashmiri shawl trader in Nadia. The Pandits did come up with an explanation for the change, but it was a rather unexpected analysis.

“What happened in Kashmir in that fateful year of our expulsion could happen in Bengal,” said Tikoo. “Bengal is missing the markers of the change,” nodded Suneel grimly.

What are some of these markers? In spite of fondly reminiscing about their Muslim friends and neighbours in that now-distant land, most of the speakers complained about perceived demographic changes that are causing an imbalance in Calcutta’s population as well as the marked sense of aggression in, and visibility of, the minority community. These transformations, they said, could explain the backlash.

On being asked whether their inferences were based on reliable data, Akshay Moza, one of the younger members of the sabha, conceded that the assumptions were based on “what we hear and read”.

Could it be that their anxiety is linked to the horror and the embedded trauma of their cruel displacement, making them imagine transformations in the city that the Right-wing narrative alleges to be true?

The question was met by a counter query. “Why are civic rules not equal for all? Why is it that the police turn a blind eye to blatant violations by bikers who hail from particular areas of this city?” asked Akshay. Only Reena Dhar said, “We do not condone the assault on Kashmiris. But our suffering cannot be compared to what they are enduring.” The elderly lady’s decision to insert the metaphorical — dreaded — hyphen, indicative of a chasm that now separates the Kashmiri Pandit from the Kashmiri Muslim, is evidence of a change that transcends Calcutta’s geographical boundaries.

How is a chasm crossed? By building a bridge. Calcutta’s Kashmiri Pandits think that there are many ways of building one. “Revive older, inclusive traditions,” chimed Akshay; “Let influential people come forward to bridge the gap,” argued the two Kauls; Tikoo diagnosed the problem differently and came up with a solution as well. “Kashmir and Calcutta have witnessed migration for different reasons, political and economic. But the impact has been similarly debilitating. When the brightest minds choose to leave, what remains behind is a volatile residue — people — that is particularly vulnerable to division. The key is to invest heavily in education and economic regeneration in both places.”

Suman, younger and unwilling to surrender to despair, confided that the idea of India is indestructible.

But as the orchestrated intimidation of Kashmiris all over India has demonstrated, there is a diabolical method in this madness. Would the city be able to heal itself? Or would it be washed away by a political tide that seeks to break and not build?

The choice is really up to Calcuttans and those who have come to call this city their own.