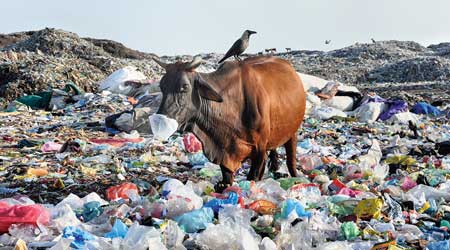 The drive against the use of plastic carry bags continued in Siliguri for the second day on Wednesday.

Siliguri Metropolitan Police raided a godown and seized 21 tonnes of plastic carry bags. Authorities of the Siliguri Municipal Corporation (SMC) conducted a drive in another market of the city.

The special operation group and the detective department of police reached a godown off Sevoke Road on Wednesday afternoon and found plastic carry bags packed in sacks.

“Across Darjeeling district, there is complete ban on plastic carry bags. The civic board has started a drive and civic body officials have said raids are necessary at specific points to prevent entry of such bags in local markets,” said a police officer. SMC authorities took away the plastic bags and sealed the stockyard, Mriganka Dey, sanitary inspector of the SMC, said.

On Wednesday, Gautam Deb, who chairs the board of administrators of the civic body, and officials held a drive against plastic carry bags at the DI Fund Market in Mahabirstan. “Soon, we will hold a meeting with NGOs and those who work for conservation of nature. The drive will go on in markets and an awareness campaign will be launched in the city,” said Deb. Around 40kg of plastic bags were seized by civic officials during the drive, SMC sources said.