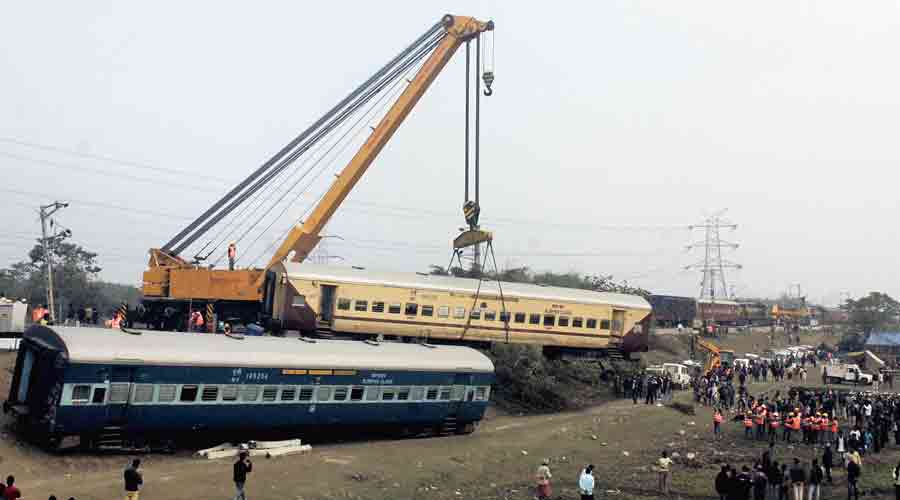 A crane removes the derailed coaches at the accident site in Maynaguri block of Jalpaiguri district on Friday.
Passang Yolmo
AVIJIT SINHA And ANIRBAN CHOUDHURY   |   Maynaguri/Alipurduar   |   Published 15.01.22, 01:50 AM

The derailment of the Bikaner-Guwahati Express along the principal track that connects three districts of north Bengal and the entire Northeast with the rest of the country disrupted train movement in the region since Thursday evening.

As restoration works are in progress on the accident site,  a number of local trains have been cancelled. The inbound and outbound long distance trains are being diverted through the Dooars route that connects Siliguri Junction with Alipurduar Junction.

“It would take some time to restore the tracks on which the accident occurred. The second track is fine but the crane, relief and other trains which have been sent to the spot are standing on it. Also, the derailed coaches need to be removed from near the second tracks so that trains can run through it. Till then, trains will be diverted via the Dooars,” said a source in Northeast Frontier Railway (NFR).

There is always a chance that trains moving through the Dooars route will get delayed as it has just one track. “We can run only one train at a time between two stations along this route,” the source added.

Because of the accident, the NFR has cancelled a number of trains which include four pairs of intercity express trains, two of which run between north Bengal and Assam. “The tourist special train which runs with a vistadome coach through the Dooars (between New Jalpaiguri (NJP) and Alipurduar Junction) has also been cancelled. Also, the Uttarbanga Express that runs till Cooch Behar district has been short-terminated at NJP,” said a railway official.

All other long distance express trains, including the Rajdhani Express trains which run from the Northeast, are running through the diverted route, he said.

The special train, that had left the accident site with stranded passengers for Guwahati on Thursday night, reached Guwahati at 7.55am today. According to railway sources, 156 passengers de-boarded in Guwahati while another 23 passengers got down at Kamakhya station, said NFR sources.

Sanjeev Kumar, a passenger who reached Guwahati today, said he managed to evade any injury in the accident but got stranded at the site.

“It is good that the railways arranged a special train for us. We were also provided with refreshments and security men were posted in each coach of the train throughout the route,” said Kumar.