The two-day protests across the state, announced by chief minister Mamata Banerjee earlier this week, will also try to mobilise labourers under the rural job scheme 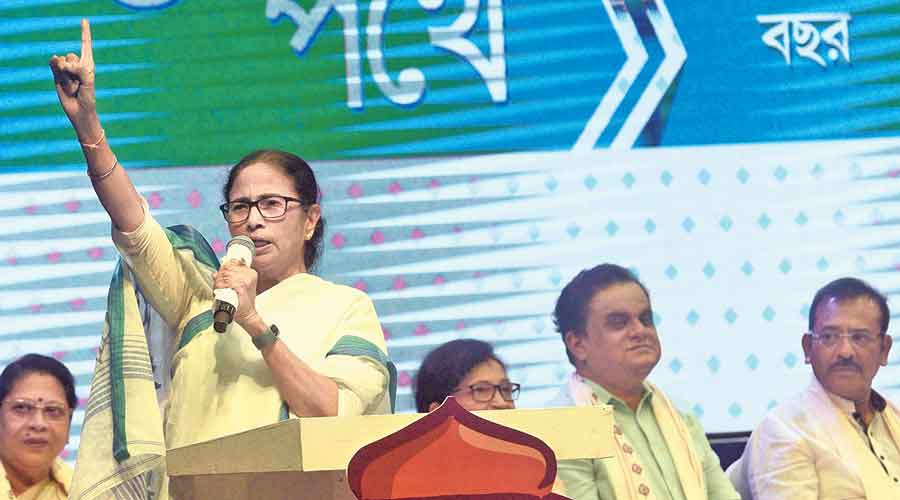 Trinamul will start protests on Sunday and Monday to attack the BJP-led central government for “deliberately” withholding Rs 6,500 crore of funds under the 100-days job scheme, which has held up wages meant for MGNREGA workers in Bengal.

The two-day protests across the state, announced by chief minister Mamata Banerjee earlier this week, will also try to mobilise labourers under the rural job scheme.

“Party leaders in districts have been asked to confirm the participation of beneficiaries from each village in the protests as the issue is pertinent to them. The protests will be launched over the next two days and continue as we want the people of Bengal to know how the BJP-led Centre is depriving Bengal,” said a senior Trinamul leader in Calcutta.

The timing of the protests, multiple sources in Trinamul said, is significant as the party seeks to counter the fortnight-long celebrations that the BJP has planned to commemorate eight years of the Narendra Modi government.

Trinamul, sources said, is planning to highlight how the Modi-led central government is “depriving” Bengal.

Over the last few days, Mamata in her public meetings said how the Bengal government has not been able to pay MGNREGA workers since December because of the Centre’s decision to withhold funds — Rs 3,000 crore as wages and Rs 3,500 crore as material cost — under the job guarantee scheme. The Centre argued that the state government created extra 3 crore mandays of work without prior approval.

A Trinamul source pointed out that delay in wages will be an issue in the 2023 panchayat polls. “The chief minister has decided to make it a political issue and that’s why we are organising protests across Bengal,” said the source.

Soumen Belthoria, Trinamul chief in Purulia, where the BJP won over 50 gram panchayats in 2018 rural polls, said processions will be taken out in all blocks on Sunday and Monday. “People will join the rallies with utensils... Under the state leadership’s orders, we have asked block leaders to bring at least 20 people from each village under each block. Participation of labourers under the (job) scheme will be prominent,” he said.

Trinamul leaders in several other districts said that they will hold similar events involving MGNREGA workers.

“Rural people don’t understand Centre-state dynamics. They only know they aren’t getting paid. We have to tell them the real reason behind the mess,” said a Birbhum leader.

In South 24-Parganas, Trinamul workers along with over 200 MGNREGA workers took out rallies on Saturday demanding that the Centre release funds immediately.