Crowning glory: An evening to remember for winners

It was time to honour some of the best literary, artistic and photographic content in the township. The prize distribution ceremony of The Telegraph Salt Lake Super Souvenir 2018 was held on Friday at the Royal Bengal Room in City Centre. The people contributing the best entries in different categories printed in Puja souvenirs of blocks or housing estates were felicitated.

The three best entries of our year-long Click Your Township contest were honoured too.

To participate in the 2019 edition of the contest, send us the souvenir your block or housing complex publishes for the upcoming Durga puja. And keep mailing us pictures clicked in Salt Lake and New Town at saltlakett@gmail.com 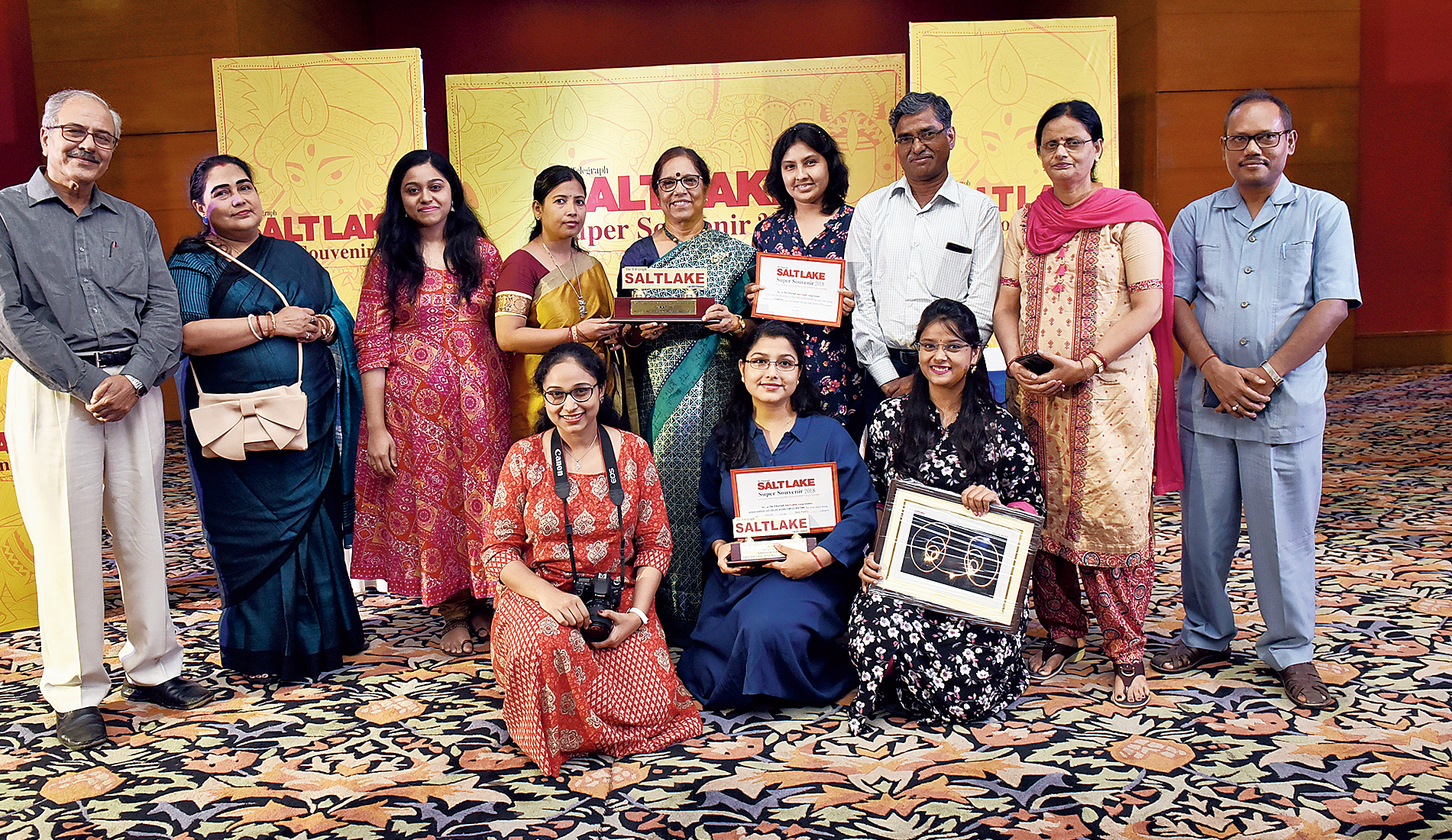 East Enclave Residents’ Welfare Association won the The Telegraph Salt Lake Super Souvenir 2018. “Our souvenir is not without its constrains. We have to maintain budgets and deadlines but what we have on our side is a pool of talented writers,” said editor Kumkum Chattopadhyay. “We are also lucky to have the youth working for us actively,” she said, mentioning Moumita Mallick, Nabomita Nath, Koushik Pattanayak and Oindrila Saha as those working actively for the souvenir. 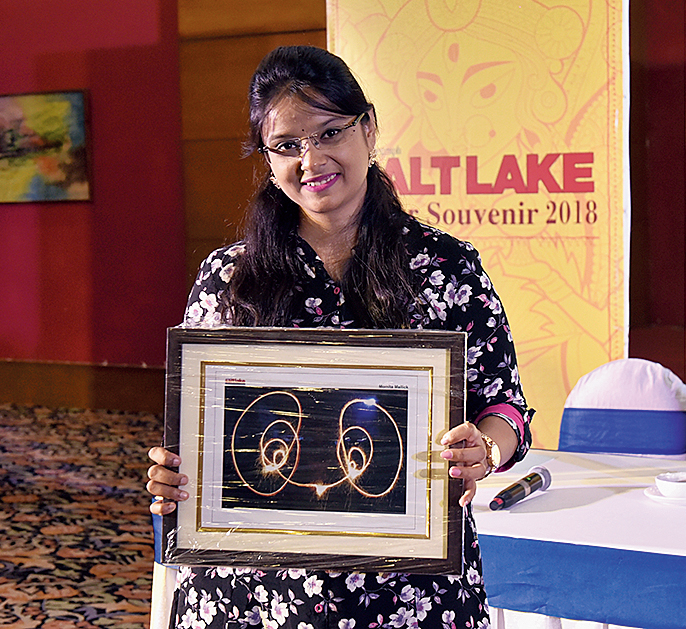 Moumita Mallick’s winning entry was clicked on the new DSLR camera that she had bought for Kali puja. “My friends and I wanted to try something new and that’s how we landed that shot with fire crackers,” she said. “This was the first time I took part in this contest and am very happy to have won it too.” 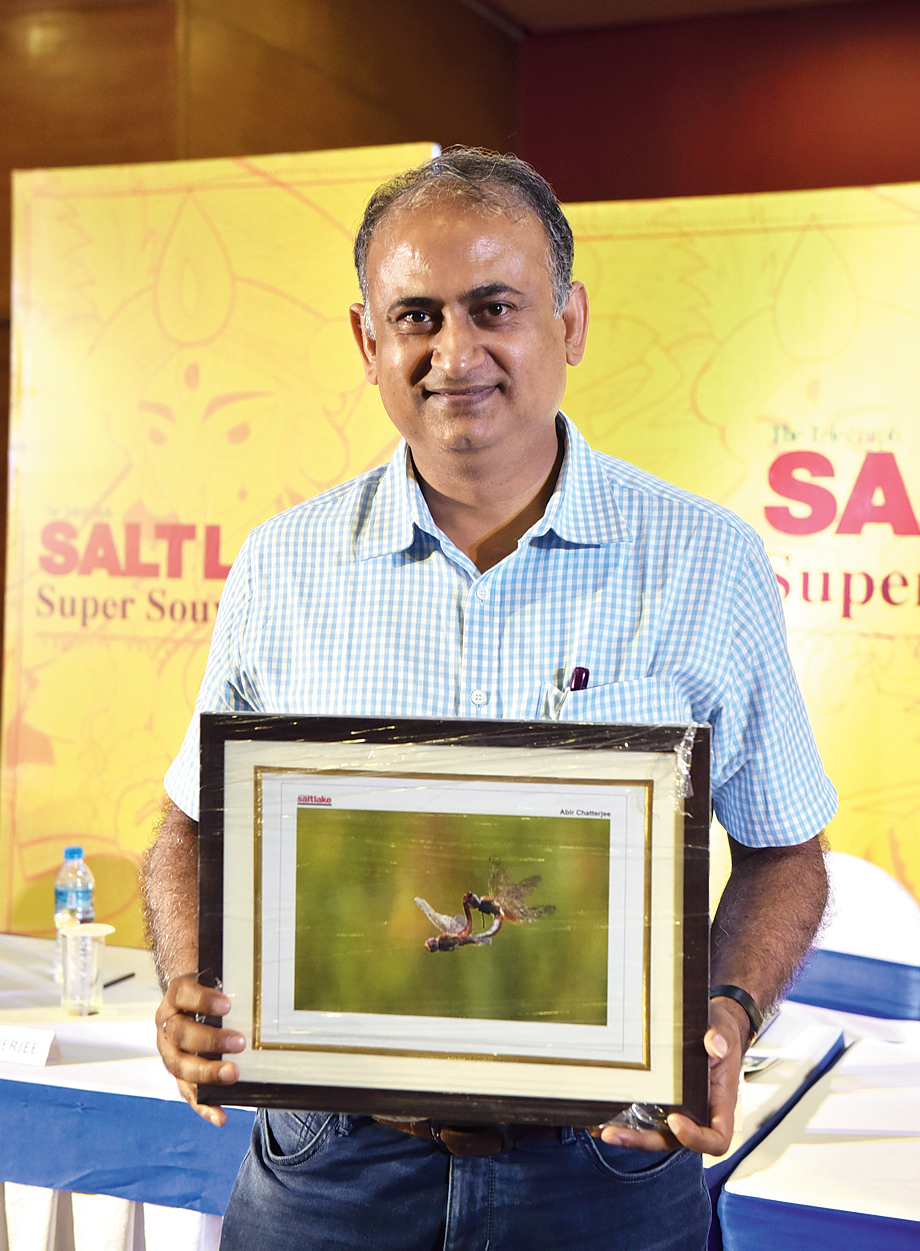 “It is wonderful to see your name in print,” said Abir Chatterjee, who specialises in clicking birds. His winning entry was a picture of two mating dragonflies. “I’m glad my sons are also developing this hobby. It’s way more constructive than computer and video games.” 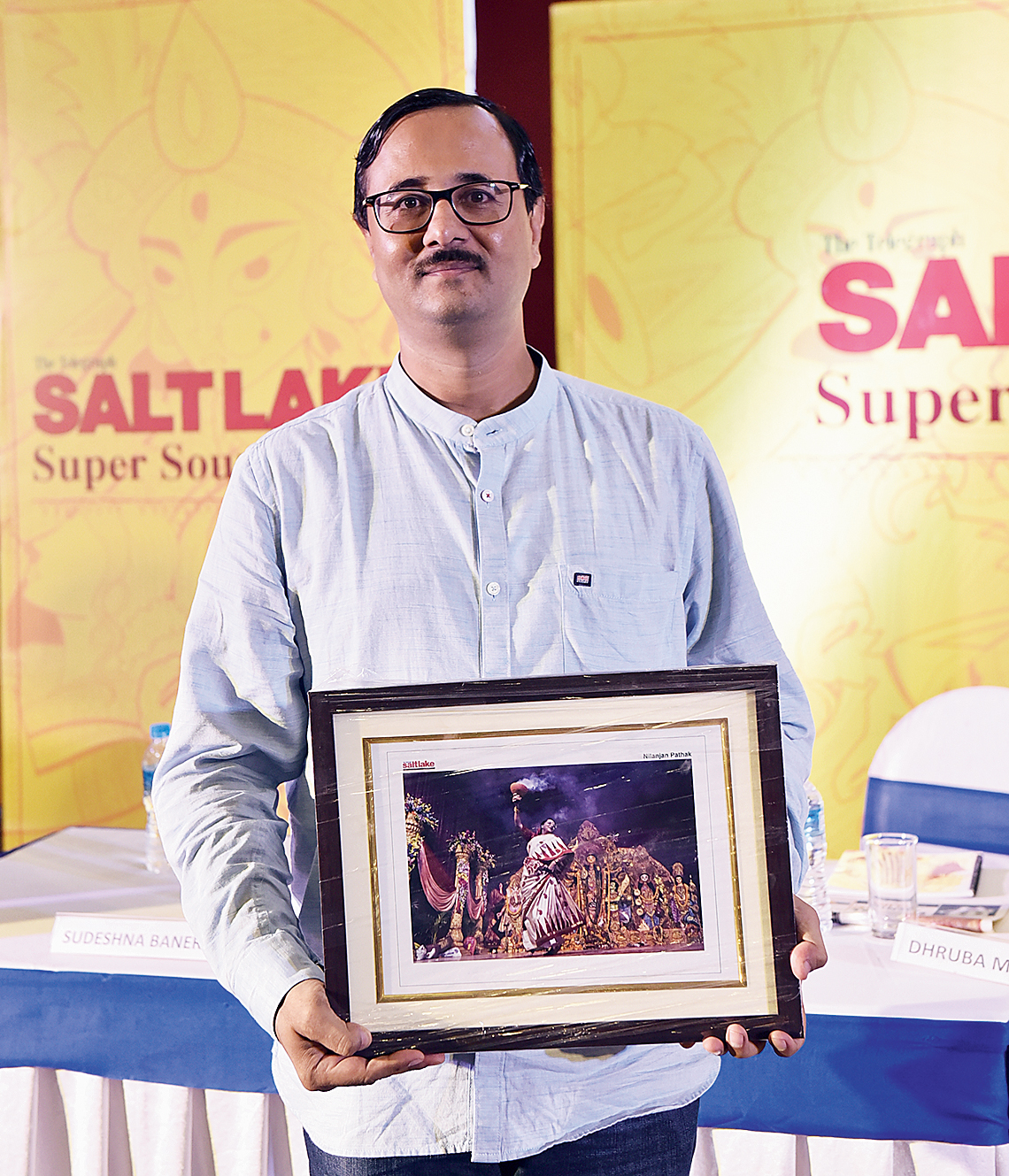 “I like street photography the most and had clicked this winning picture of dhunuchi naach when I went to see FE Block’s Puja with my family last year,” said Nilanjan Pathak, adding that feels like a celebrity whenever someone tells him he has seen his picture in the newspaper. 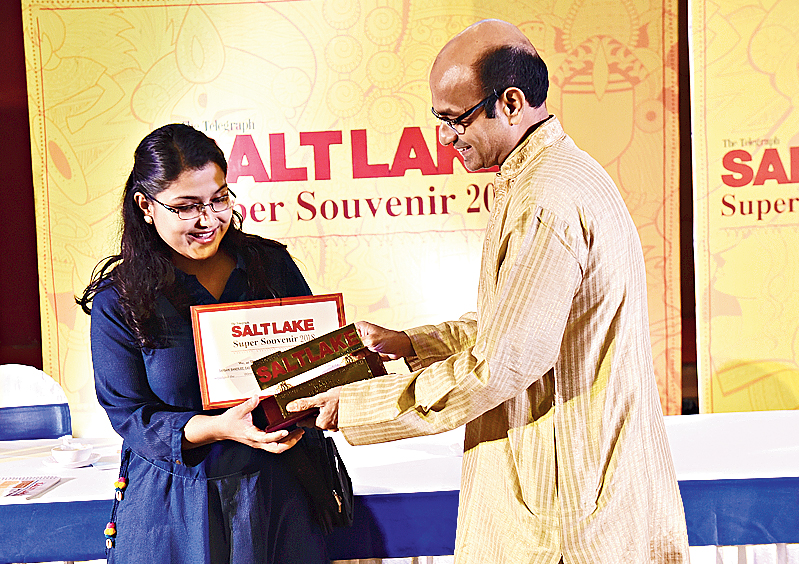 Sarbani Banerjee won the award for her poem titled Chhuti and read out to the audience what she said was the sequel to the poem. “My sister complains that I don’t write enough and that I sit to write poetry only when our souvenir committee comes asking for an entry,” she smiled. 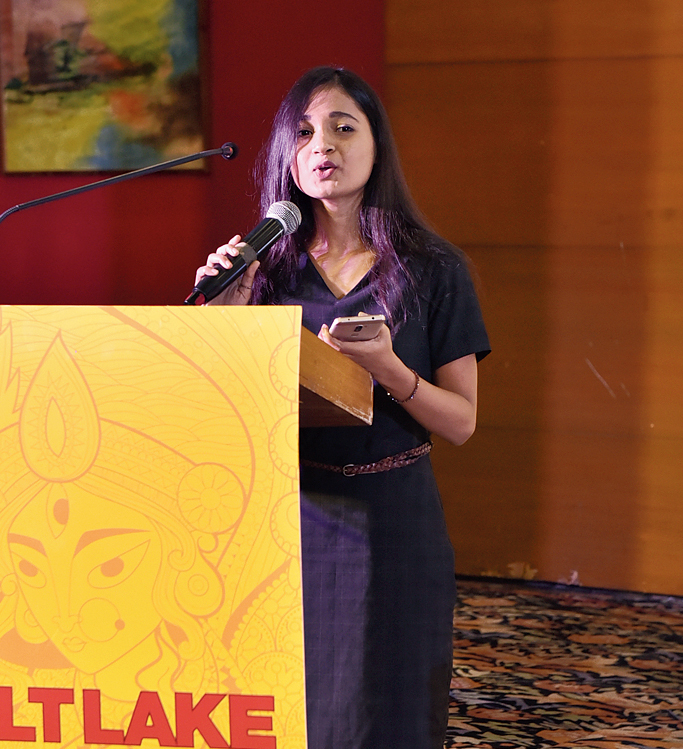 “I don’t usually take part in contests and so it was a lovely surprise to know that my poem has won a prize,” said Rhitama Basak, who happens to be the daughter of the Best Editorial winner Basab Basak. A chip of the old block, Rhitama spoke eloquently about how Salt Lake has acquired its own character and about the satisfaction of reciting one’s work before the audience. 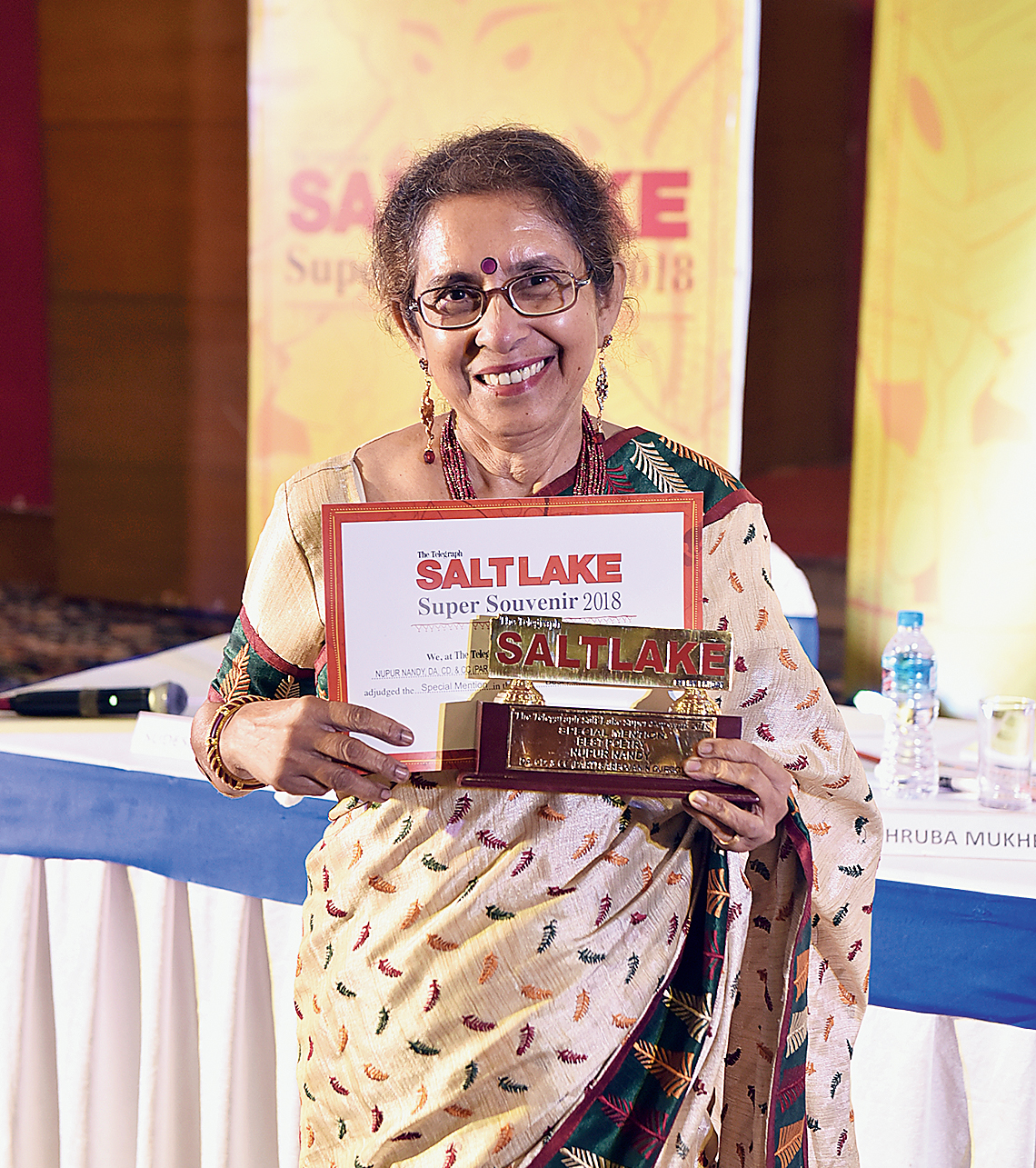 “I have a Masters degree in Bengali but couldn’t pursue the subject as we moved to Ranchi after marriage,” said Nupur Nandy of New Town’s CD Block. “However I had kept in touch with writing essays and more recently — poetry — and was very surprised to see my name as a winner in the newspaper. Thanks to The Telegraph Salt Lake!” 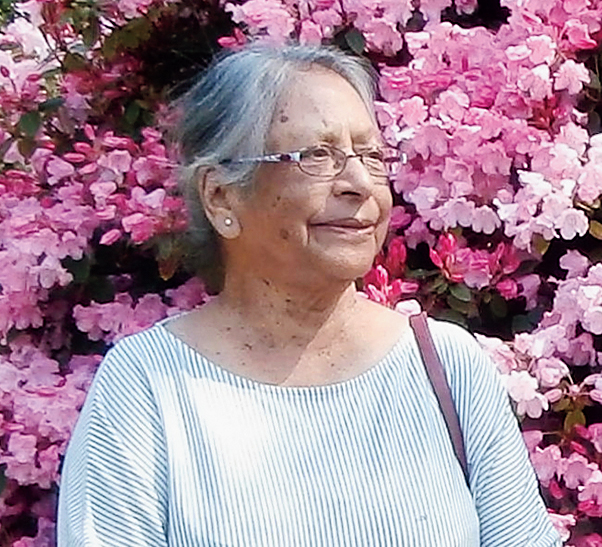 Winner: Jharna Gourlay, Banga Sourav Abasan for Hanover Lodge, Ranimata ar Chhuriknata Gourlay, who is now in the UK, sent us her acceptance letter — I am grateful that The Telegraph Salt Lake has given me this honour and I regret that I can’t be present in the prize distribution ceremony.

I am also thankful to my fellow residents of Sourav Abasan who every year send me a reminder that Puja writing contribution is due. They also send their critical appreciation later which encourages me to write again.

What I have written had happened to me as a student in England, when I was young and naive. At that stage I went through immense anxiety and failed to see the funny side of it. Now in my old age I look back to those events and feel amused. I am glad that those who kindly read my piece also enjoyed it. 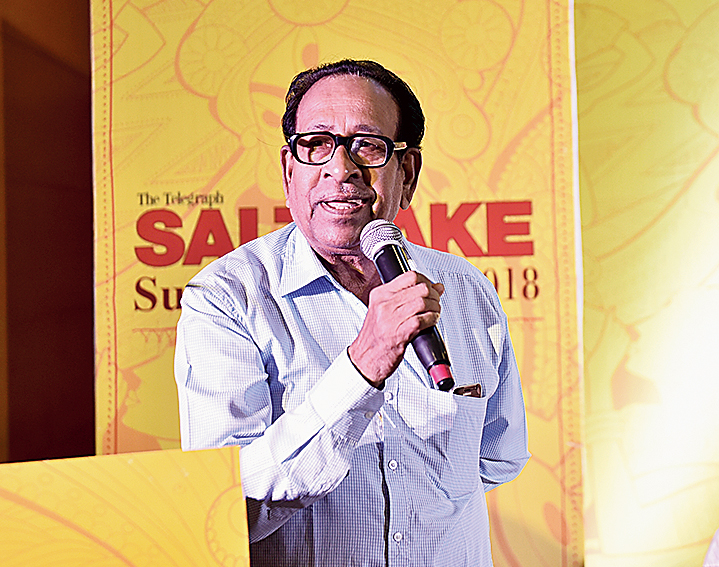 “Today children know Jack and Jill but not Sukumar Ray’s Baburam Sapure. They know Twinkle twinkle but not Nazrul Islam’s Babuder Dalpukure. They know Harry Potter but not Thakumar jhuli. I urge parents to teach their children Bengali,” said Pijushkanti Majumdar, before reciting a Tagore poem. 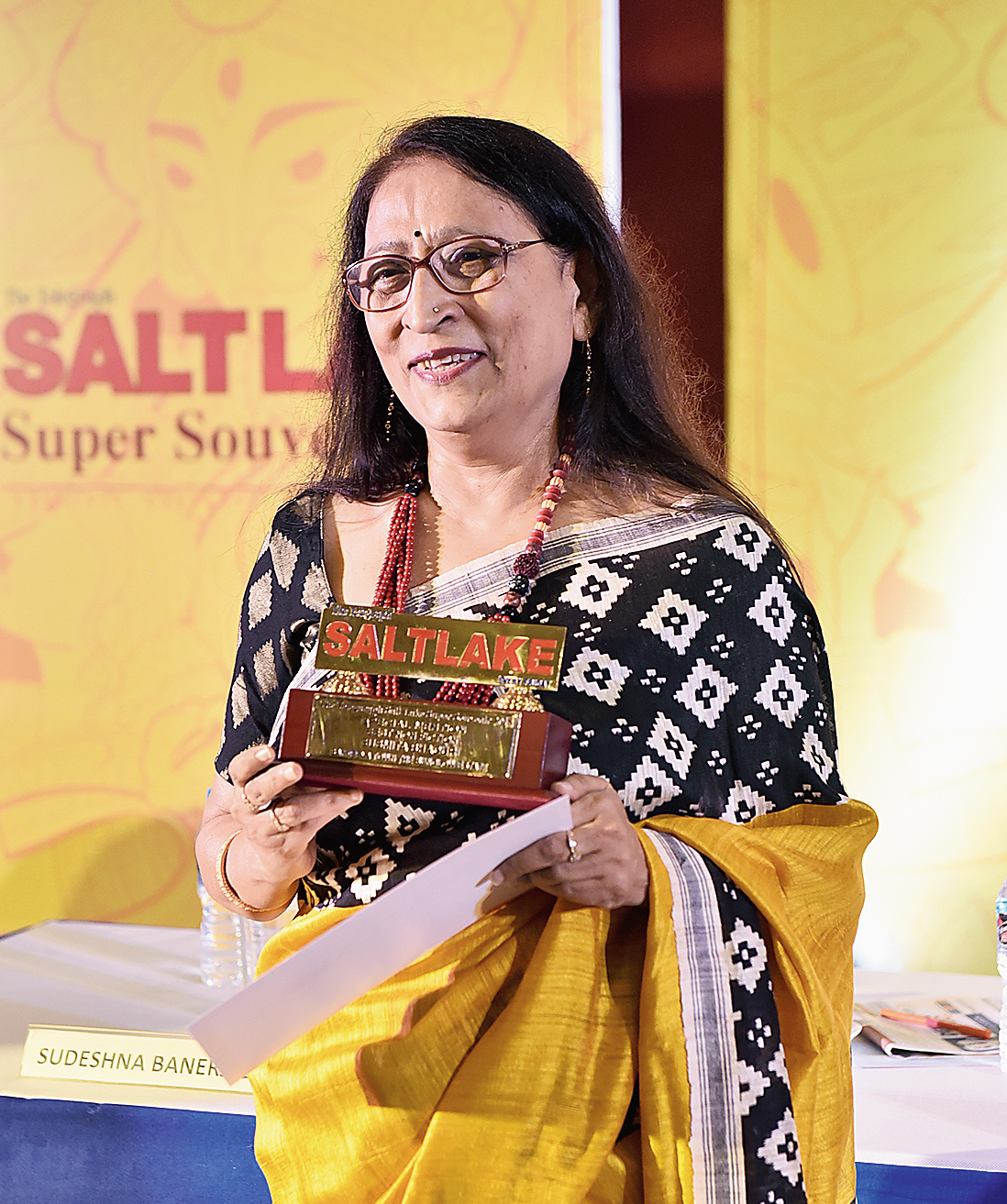 “Travelling is a passion, almost an addiction, but instead of writing serious journals I prefer giving a light hearted take on my experiences,” said Susmita Bhaduri, who had written on her adventure visiting Alaska. 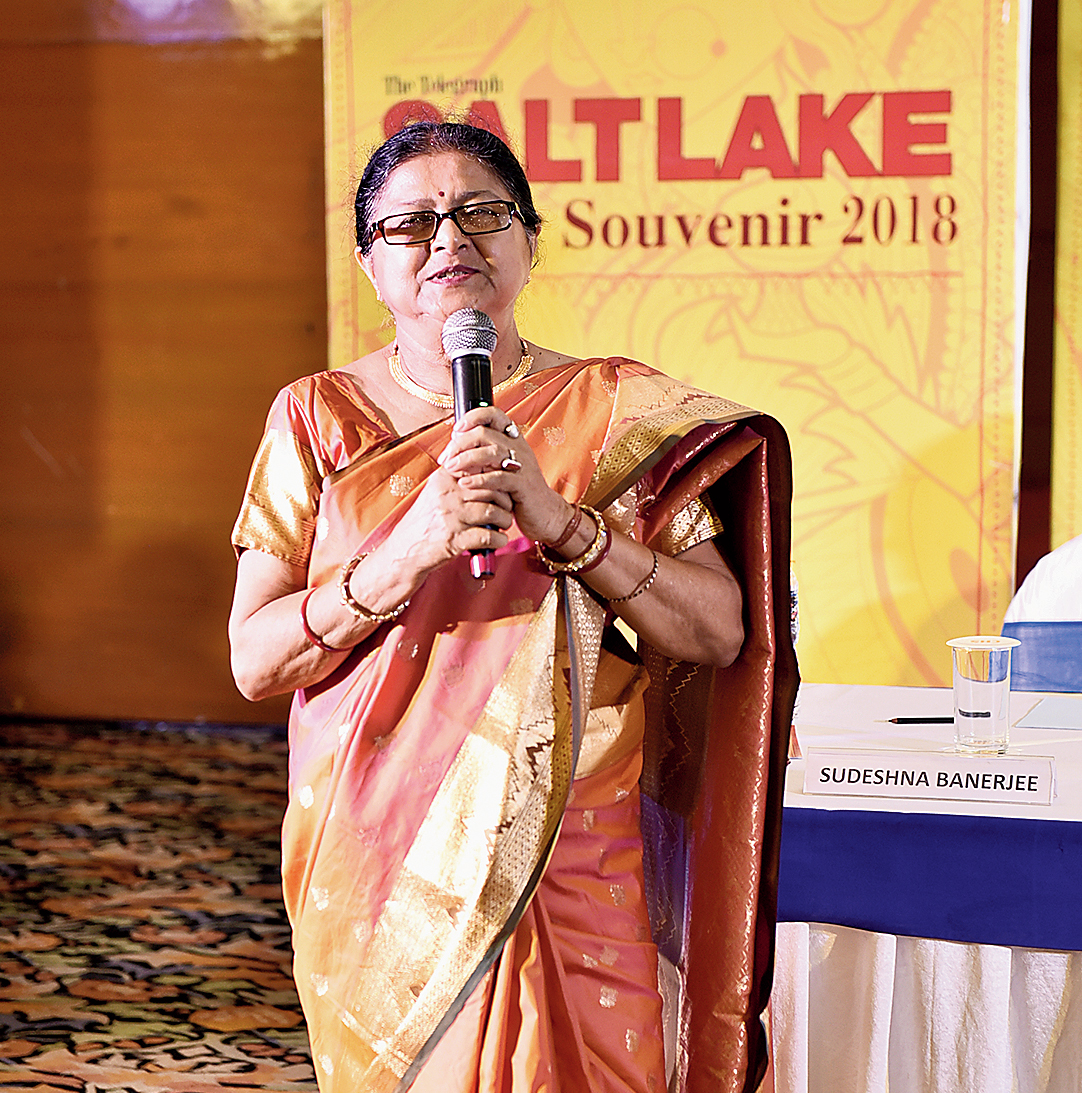 Rita Das dedicated her award to her elder sister, who unfortunately, could not accompany her to the ceremony. “My sister has always encouraged me to write and one of my first landmarks in writing was when her acquaintance asked me to write his mother’s biography,” said Das. “I really wanted to bring didi along today but she wasn’t well.” 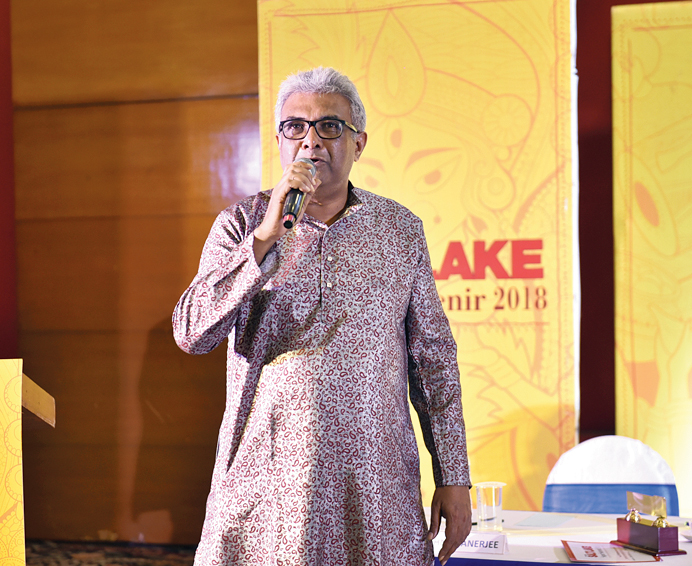 “Puja means rivalry between every neighbourhoods but The Telegraph Salt Lake evokes healthy competition. It nudges us to better ourselves,” said Krishnendu Mukhopadhyay. “And judging by the interest among readers here and even at the book fair, it doesn’t seem like the habit of reading is dwindling at all.”

Chandra felt amateur writers benefit from awards and encouragements. She also showed a book she has published of 15 short stories that were first released in BL Block’s souvenirs over the last 15 years. “The central character in all these stories is the festival of Durga puja,” she said. 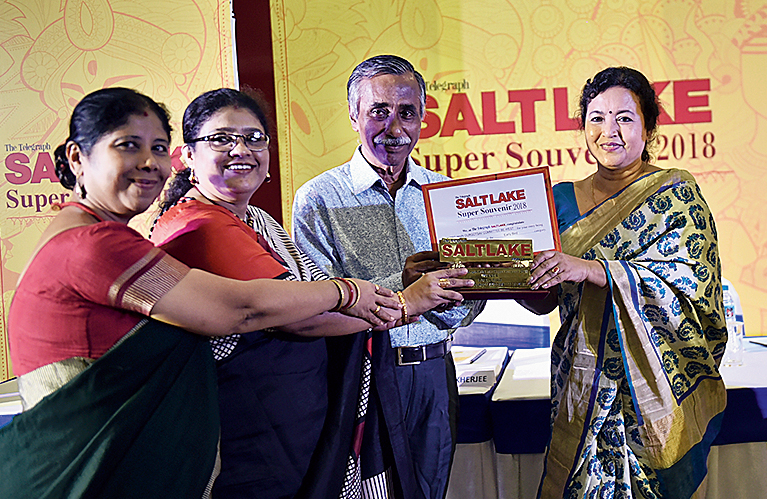 “As secretary of the puja committee I’m basking in reflected glory,” said Shyamal Baran Roy (in white shirt). “The real credit goes to members like Susobhan Roy and Alak De, who chase writers, co-ordinate with the printer and maintain the deadline. And for the sake of this contest we consistently strive to be the early — nay — earliest bird.” 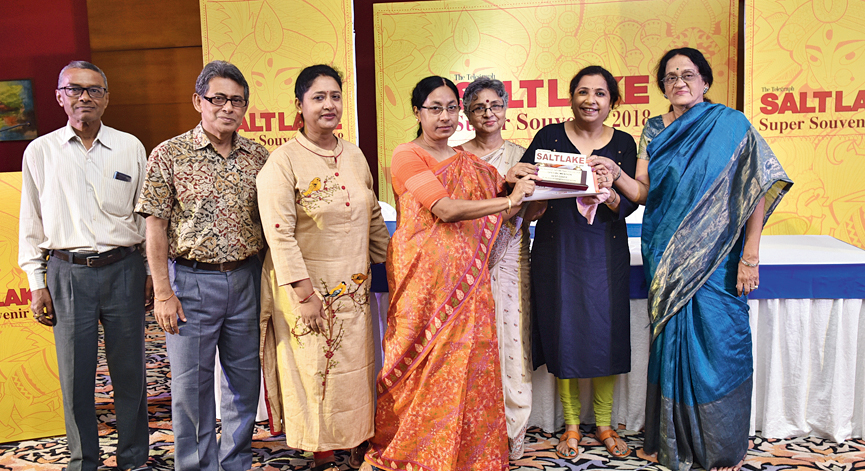 “This prize distribution ceremony has become part of our block’s annual events calendar. Even the children were so excited this morning at the prospect of us receiving a prize. These awards work to motivate us and help raise the standard of the souvenirs,” said said one of the convenors Sreya Ghose (in orange). 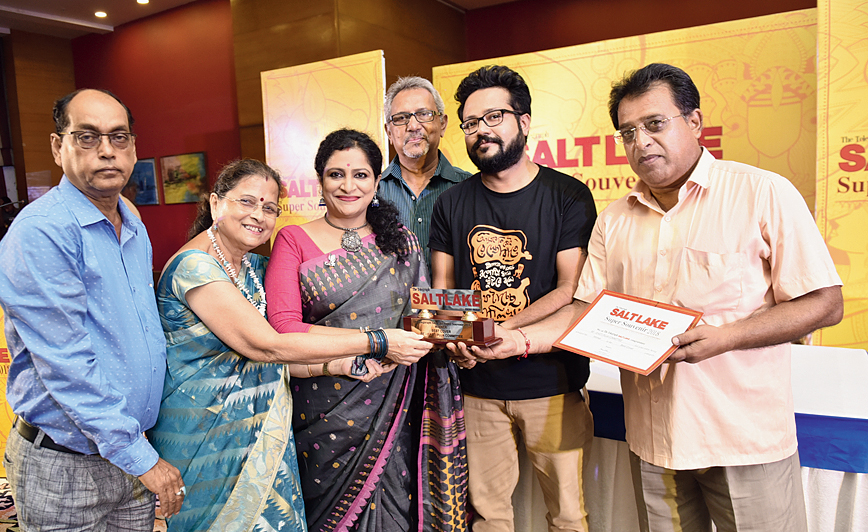 Narottam Dutta, convenor, souvenir sub-committee (in green shirt), shared how tough it was to produce the souvenir but how this award encourages them every year. The cover had been created by visual artiste Kushal Bhattacharya (in black T-shirt), whose office is in BE Block. “I’m happy everyone has liked the cover. In fact I’ve even come to know that some pujas outside Salt Lake have copied the design,” said Bhattacharya. 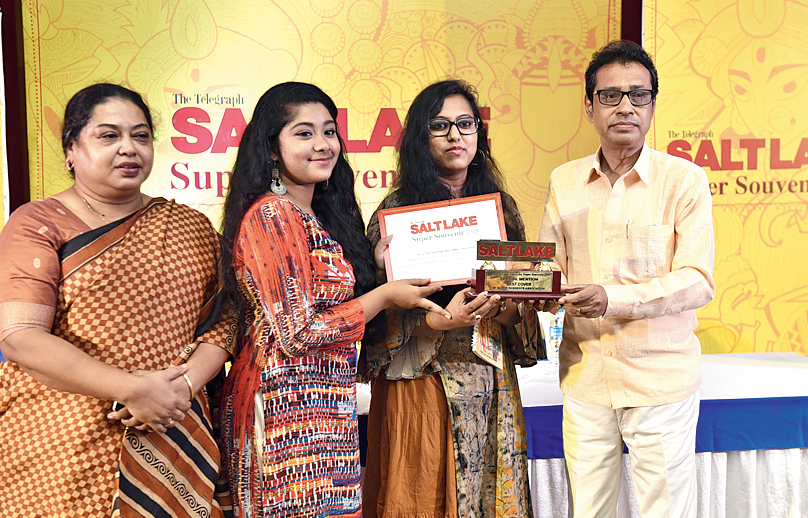 “More than a prize distribution ceremony this is an occasion to honour us,” said editor Subhasish Mondal (in white shirt). “The artiste who created the cover is Arup Pal, who runs an art school in our block. It’s a pity he couldn’t come with us today.” 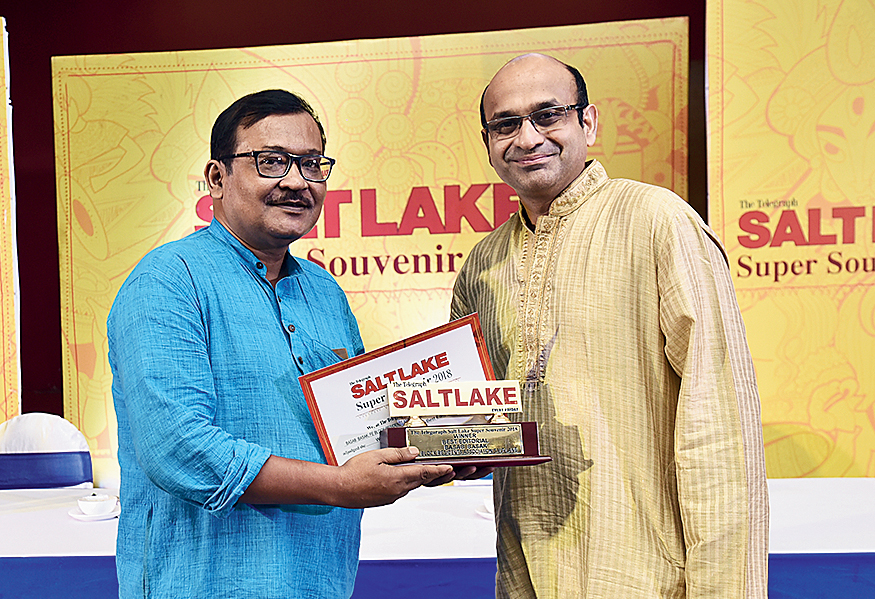 “These are trying times for Bengali literature but these souvenirs upholds the language and culture of Bengal and so kudos to The Telegraph Salt Lake for supporting it for 14 years now,” said Basab Basak (in picture left, receiving the award from executive vice president, dailies, Dhruba Mukherjee). 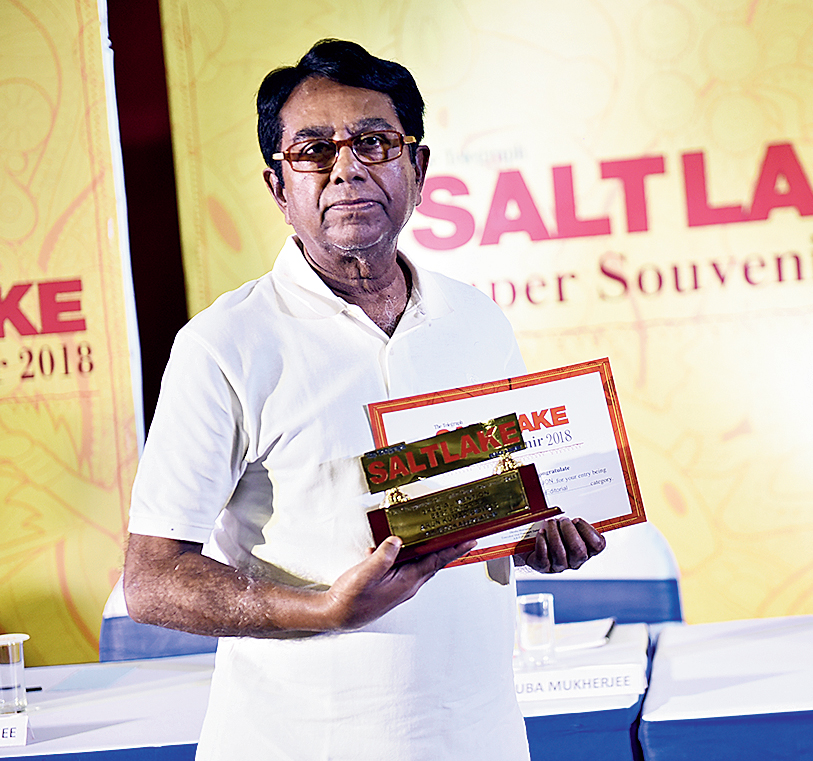 “I’ve been living in Salt Lake for 38 years and had written on the differences between pujas now and then. Now a handful of pujas has become much bigger than the others and in a way, I miss the simplicity of the pujas of yore,” said Arun Kumar Biswas. 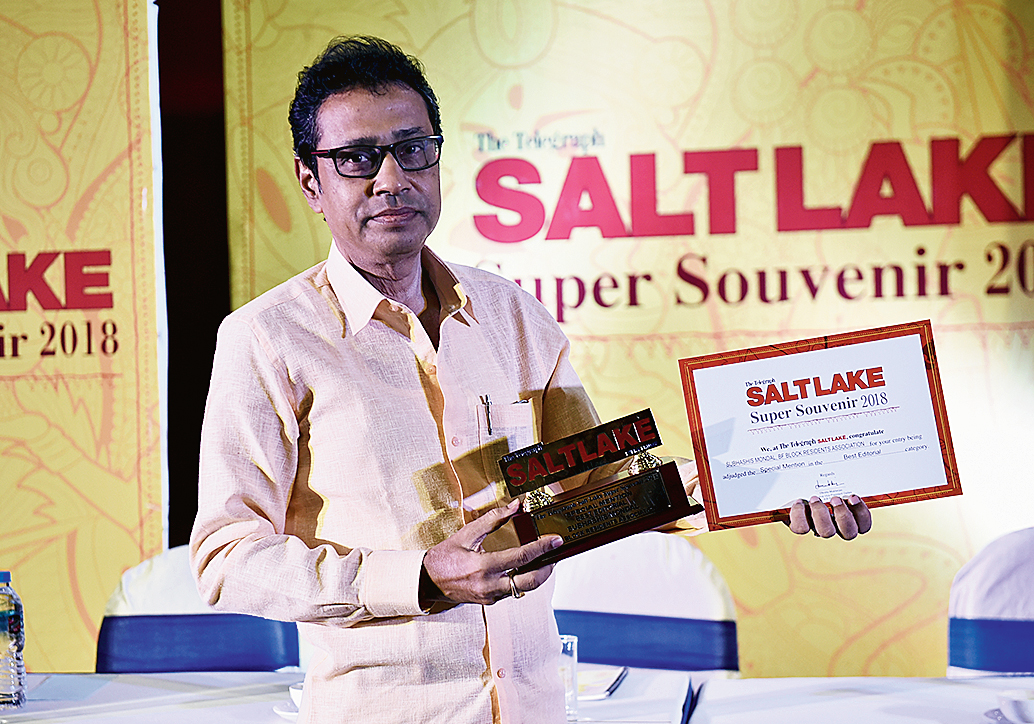 “We go to puja pandals to admire the art without sparing a thought for the artisans,” said Subhashis Mondol, on the subject of his article. “Let’s think about doing something for the sculptors, painters and lighting men who slog so we can enjoy.” 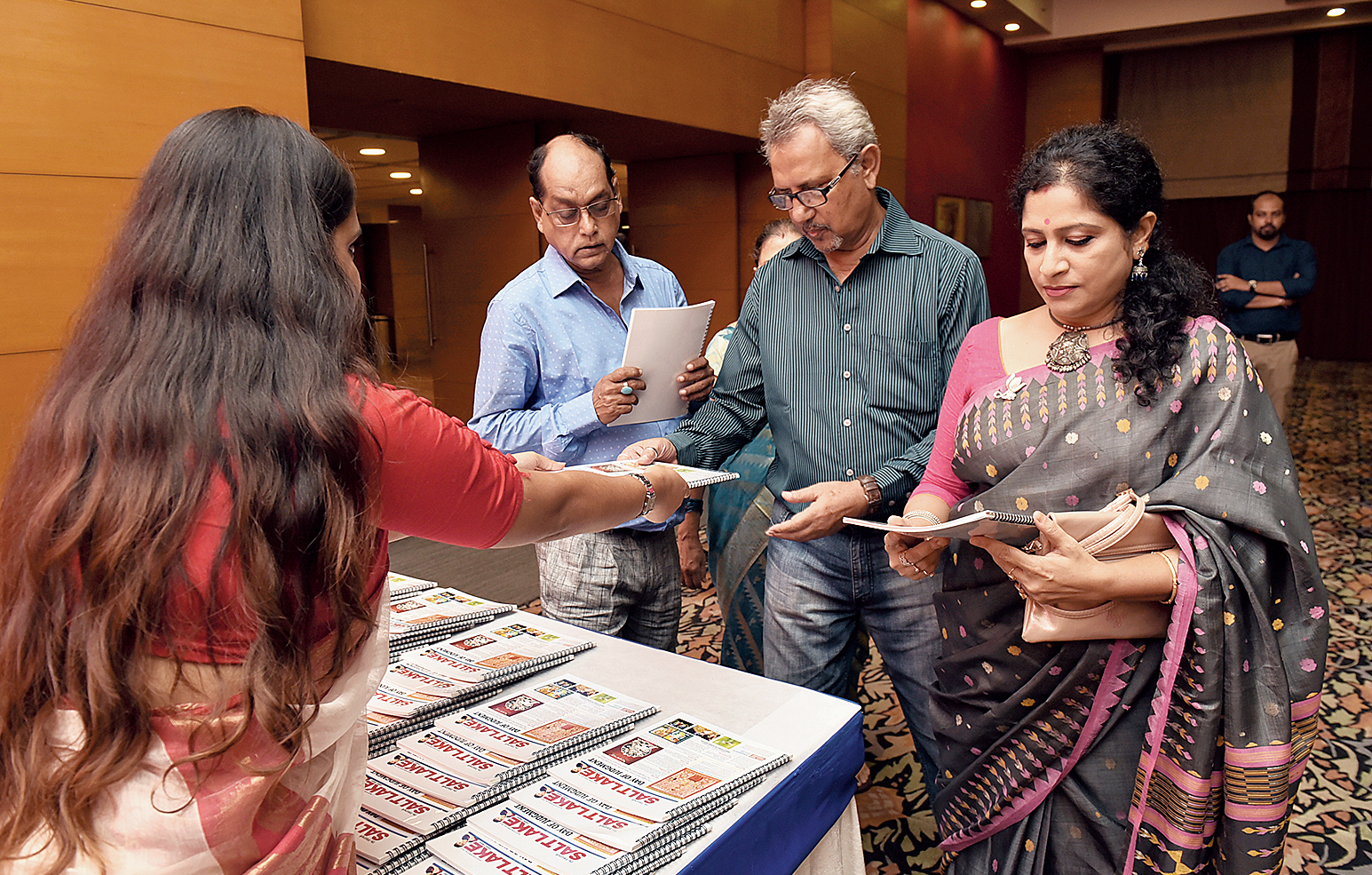 Guests collect copies of booklets compiling the works of the winners. 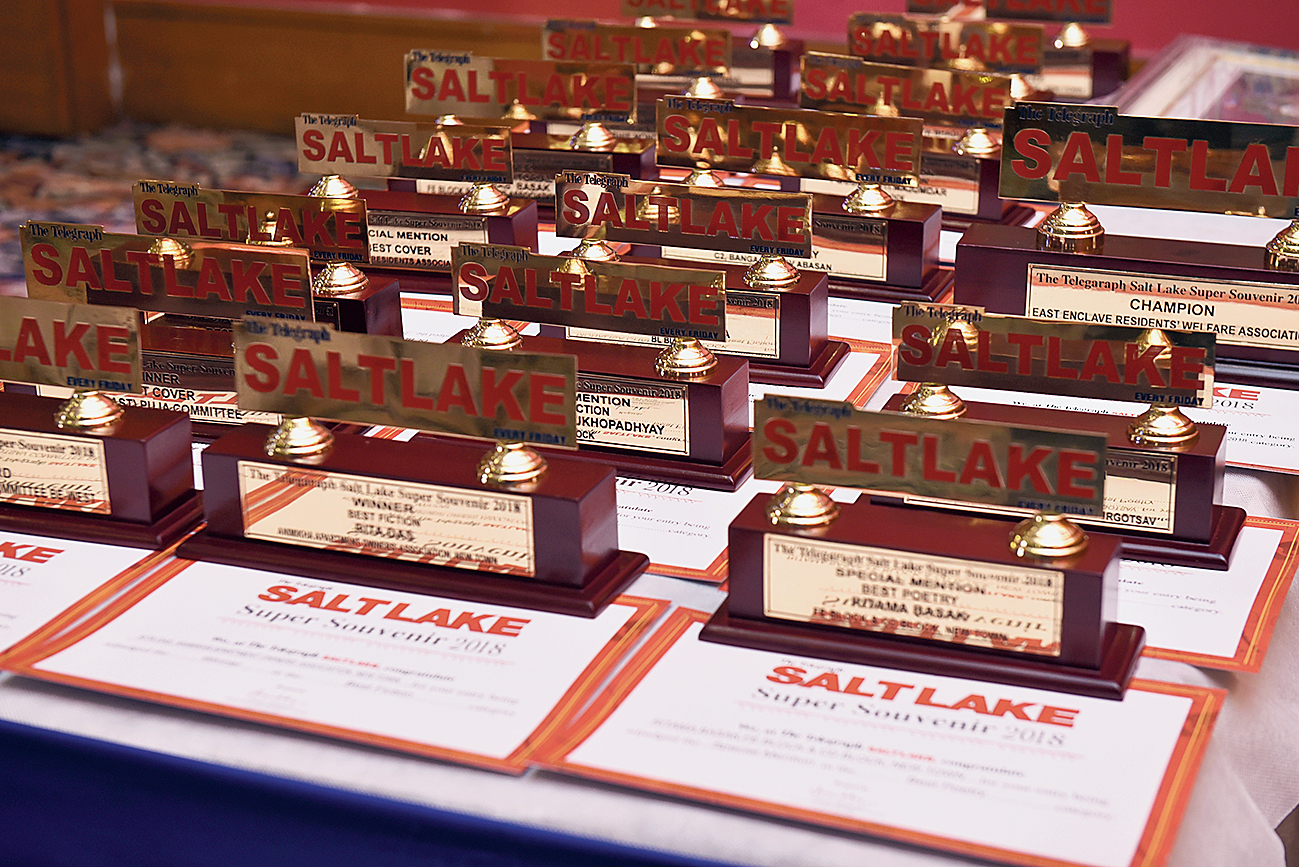