Teesta river water was collected and tested from a Jalpaiguri pocket on Wednesday, days after shoals of dead fish were found floating along the stretch. 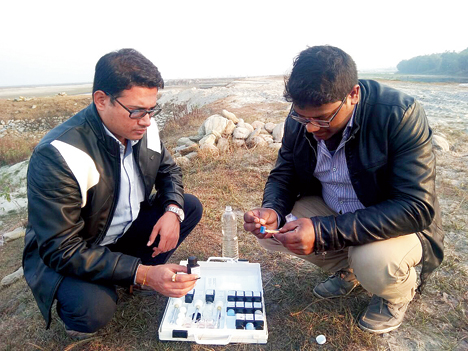 Jalpaiguri: Teesta river water was collected and tested from a Jalpaiguri pocket on Wednesday, days after shoals of dead fish were found floating along the stretch.

Officials of the district fisheries department and the Fish Farmers' Development Agency (FFDA), who collected the water from Mondalghat in Jalpaiguri Sadar block, said the samples would be sent to the department's laboratory in Calcutta.

The lab will determine whether the water was polluted amid suspicion that some unscrupulous fishermen put pesticides in the river, leading to the fish deaths.

"It is either a case of poisoning or electrocution. As we conducted the basic tests, we found no anomaly," said Somnath Chakraborty, executive officer of the FFDA.

During the visit, the officials also did not find any more dead fish. "This is because some people went on collecting the dead fish till yesterday (Tuesday) afternoon," said a resident.

Chakraborty said that to find out whether any poisonous substance was poured into the river, a test known as high performance liquid chromatography must be done. Also, tissue culture of dead fish samples can help detect such toxic substances, he added.

"Histopathology of some parts of the fish samples can also help in detecting poisons. But we cannot carry out such tests here and have to bank on our laboratory in Calcutta," said the FFDA official.

Since Monday, locals spotted dead fish floated along a 2km stretch of the Teesta. Some of them jumped into the water and started collecting the fish. It was also alleged that some of those fish were even sold in local markets of Jalpaiguri till Tuesday.

"If the fish have died due to poisoning, its consumption can lead to side effects. Also, fish which have got infected but are alive, will cause infection among other species, including fish, in the water. We are thus advising people to abstain from buying fish of local varieties which were found dead for some days," he said.

The official also mentioned that those involve in the act - of mixing poison or putting livewire in the river - had also blocked the river's water in the locality on Monday.

"Using earth, sand and stones, they had blocked a portion of the river water and then resorted to the illegal act. Later, they removed the blockage which led to inflow of fresh water in the stretch and removal of suspected toxic water. That is why, it seems, we have not found any anomaly in the basic tests."