As a result, office work and certain activities at tea estates have got disrupted 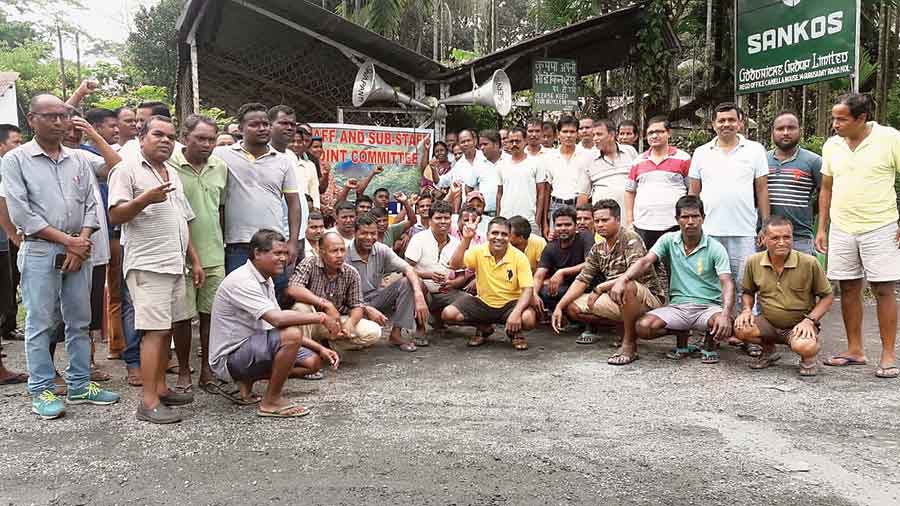 A demonstration by employees at Sankos tea estate in Alipurduar.
Anirban Choudhuri
Our Bureau   |   Siliguri/Alipurduar   |   Published 01.06.22, 03:31 AM

Around 10,000 staff and sub-staff of the tea industry in north Bengal launched a 72-hour strike on Tuesday, demanding an immediate salary hike.

“Staff” refers to persons in clerical posts below the assistant manager in tea gardens. “Sub-staff” refers to cooks, gardeners, fitters, among others.

Office work and certain activities were disrupted on tea estates.

In Odlabari of Jalpaiguri district, a group of staff and sub-staff observed a fast on the first day of the strike.

“Since 2014, there have been certain interim revisions in salaries. The state government and tea planters should either fix minimum salary or revive the old system of... annual revisions,” said Partha Lahiri, general secretary of the West Bengal Tea Garden Employees’ Association.

Tea trade unions which represent workers are also intensifying their call for immediate hike of wages or fixing of minimum wage rate.

A tea worker in Bengal earns Rs 202 per day.

To resolve the issues, the state labour department has called a tripartite meeting with tea planters’ associations and trade unions on June 2, the last day of the ongoing 72-hour strike, in Siliguri, sources said.

Eleven associations of tea planters and 34 tea trade unions have been invited.

“The issue of wages and salaries will be discussed at the meeting. In February this year, such a meeting was held for the last time where no decision was reached. The state government wants the tea industry to announce an interim hike but tea planters will have to make the final call,” said a source in the department.

Bengal on Tuesday reported 49 Covid-19 infections, 32 recoveries and no death. Currently, there are 353 active cases in the state, according to the state bulletin.

The state’s positive confirmation rate was 0.66 per cent, the recovery rate 98.93 per cent and mortality rate 1.05 per cent on Tuesday.