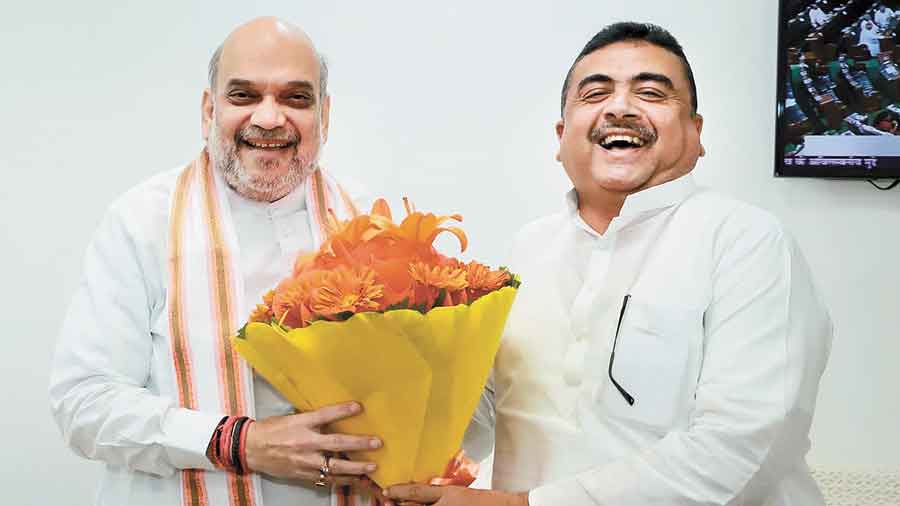 The meeting has come days ahead of chief minister Mamata Banerjee’s visit to the national capital where she is expected to meet Prime Minister Narendra Modi.

“It’s an honour for me to meet Hon’ble Union Home Minister Shri Amit Shahji for 45 minutes at his office in Parliament,” Adhikari tweeted about the meeting. “I briefed him how WB Govt is completely mired in corrupt activities such as the Teachers recruitment scam. Also requested him to implement CAA at the earliest.”

Adhikari told journalists after the meeting that he had submitted to Shah a list of 100 names of Trinamul Congress leaders, including ministers and other legislators, who, according to him, were involved in the scam.

“I’ve also given him documents. I’ve shared letterheads issued by four MLAs with him. Partha Chatterjee is not the only one involved in this scam,” Adhikari said.

According to sources close to Adhikari, his visit to Delhi was prompted by Mamata’s scheduled arrival on August 7.

While Adhikari publicly claimed that his meeting with Shah pertained to the alleged corruption in the SSC recruitment and the consequent arrest of former minister Partha Chatterjee, sources in the BJP said the discussion wasn’t limited to that.

According to several BJP insiders, the two also discussed the functioning of the state unit of the party. Recently, Adhikari’s absence from a major rally organised by the party in Calcutta on the recruitment scam, which was led by state BJP president Sukanta Majumdar, became a talking point. A day later, Adhikari participated in a rally in south Calcutta on the same issue, but Majumdar was absent from the scene.

Although Adhikari on Tuesday tweeted a picture of himself, Majumdar and MPs Dilip Ghosh, Jyotirmoy Singh Mahato, Saumitra Khan and Surinder Singh Ahluwalia, sitting together at the central hall of Parliament, it was said that not everything was fine between the Opposition leader and the state BJP president.

“Suvenduda has felt a bit left out in the decision making within the party. This might have led to a rift,” a source close to him said.

The Trinamul Congress didn’t miss the chance to take a dig at Adhikari by referring to the apparent factionalism within the BJP. Trinamul

MP and party’s spokesperson Santanu Sen asked if the

other leaders of the BJP knew about Adhikari’s meeting with Shah.

Majumdar — who is currently in Delhi to attend the ongoing Parliament session —also called on Nadda on Tuesday. In a twitter post after the meeting, Majumdar wrote that he had discussed the “current situation of Bengal” in a “special meeting” with Nadda. Majumdar was accompanied by Mahato.