Thursday’s rally, which was organised at a 12-hour notice and had barely 100 participants, sent loud message 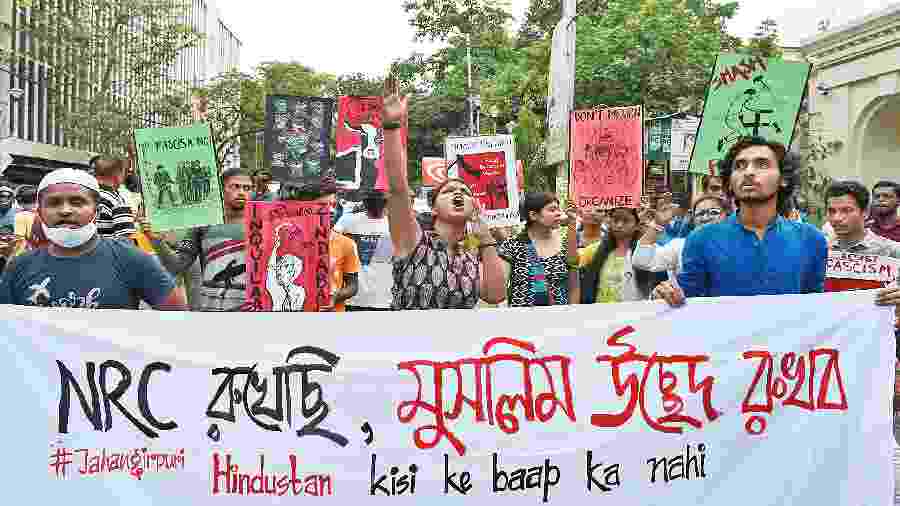 Past and present students of Presidency and Calcutta universities walked from College Street to Rajabazar on Thursday to protest the “bulldozer demolition drive” in Delhi.

People behind the demolition drive, not its targets, are terrorists and riot-mongers, said multiple participants.

“There is a constant effort to villainise Muslims — through films like The Kashmir Files and by creating a controversy around halaal, hijab and other issues. There is a constant attack on their identity to instill a false notion in the minds of the majority — that Muslims are terrorists and infiltrators,” said Rim-jhim Sinha, a former student at Presidency University who joined Thursday's rally.

“We have to stand up to this campaign of hate. We have to tell everyone that people who are demolishing ho-mes are no less terrorist than the ones who justify violence.”

In Delhi on Wednesday, bulldozers demolished shops in a Muslim-majority pocket of a neighbourhood that had witnessed clashes during a Hanuman Jayanti procession on Saturday.

The BJP-led North Delhi Municipal Corporation called the action in Jahangirpuri a crackdown on illegal construction. But the location and the identity of most of the sufferers seem to place the action alongside the demolition drives undertaken against anti-CAA protesters and people accused in Ram Navami riots in BJP-ruled Uttar Pradesh and Madhya Pradesh, as well as Delhi.

Thursday’s rally, organised at a 12-hour notice, had barely 100 participants. But it was loud and it pulled no punches.

“We stopped the NRC. We will not allow the ouster of Muslims,” said a banner at the front.

“Fascist bulldozers will be resisted with revolutionary fists,” read a poster.

The students said it was time to organise a sustained movement against the BJP government at the Centre, like the country had seen in the winter of 2019 against the citizenship thrust.

The Narendra Modi regime was forced to step back on the citizenship thrust in the face of sustained protests all over the country.

Since then, the Centre and the BJP-ruled states have tried one tool after another to harass minorities, said multiple participants at the rally.

“The Narendra Modi regime wanted to implement NRC to target Muslims. But spontaneous protests erupted across the country and the government was forced to step back. But since then, the saffron ecosystem has been trying to keep the people of this country in a constant state of polarisation. Festivals like Ram Navami are being used to stoke communal tension,” said Debayudh Sanyal, a student at Presidency University.

“Students had been at the forefront of the movement against the citizenship thrust. Now, it is time for students to step out again,” he said.

The marchers said the bulldozers unleashed in Delhi were an assault on the Constitution.

“To come out and protest is absolutely essential.... One after another atrocity against fellow citizens is not only unconstitutional but inhuman,” said Nousheen Baba Khan, activist and teacher of political science at a city college.